Ben and Ellen Harper released their musical collaboration Childhood Home just in time for Mother’s Day, and both consider it more than just a bonding exercise.

For Mother’s Day, you can do a number of things for the special woman who brought you into this world: buy her flowers, take her to dinner, or maybe even indulge her with an excursion or vacation.

If you’re Ben Harper, you can record an album with her as your duet partner.

Childhood Home, released this week, is just such an endeavour: a 34-minute collection of folk-influenced originals featuring Ellen Harper and her Grammy Award-winning son.

It’s an intimate collection, with songs such as “A House is a Home,” “Born to Love You” and “Memories of Gold” rooted in the comfort of family life. It’s an album that makes us wonder: What’s it like working with your mom?

“There’s nothing cooler,” Harper, 44, replied during a phone interview recently, his mother listening in.
Prior to this album, the eclectic Harper had worked on 18 recordings, including collaborations with folk instrumentalist Tom Freund, the gospel-driven Blind Boys of Alabama and veteran blues harmonica player Charlie Musselwhite.

But did he have to adjust his approach as producer when he worked with his own flesh and blood?

“I didn’t have to tiptoe. I knew when to leave the room,” he replies with a laugh, “and that was one of my production strengths. I didn’t need to approach it any differently, because if I did, I’m not sure she would have wanted to do it.” 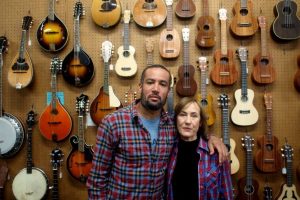 For her part, Ellen Harper — a musician and songwriter in her own right —simply let her son do his job.
“In my mind I went in knowing he was the producer, and knowing how much experience he has, I was willing to let him make the final call.”

“It was an incredible experience on a lot of levels,” says Ellen. “On a musical level, the album came together . . . well, I can’t even say ‘effortless’ because we worked really hard. It just seemed like it had a natural flow.
“And working with him as my son worked better than you might think and maybe even better than we had anticipated.”

“I just think it was great dialogue — not even therapy,” adds Ben Harper. “I think everyone should take a turn at creating something, whether it’s artistic or otherwise. For me, it was wonderful. It was a great growing, learning, expansive experience to be able to work with my mom on this level.”

“It takes you out of the roles you tend to fall into in family and in youth,” says Ellen. “Suddenly you’re working with a person in a whole other role.”

Although Ben Harper says this album had been in the works for a while — “we’ve been talking about doing this record for 17 years,” he notes — the seeds for the project were probably sewn before he was born.

In 1958, Ellen’s parents established The Folk Music Center and Museum in Claremont, Calif., and it remains run by the family to this day. Aside from selling a lot of exotic instruments, the music store became a lightning rod for recording artists like Leonard Cohen and Taj Mahal.

“David Lindley used to come in all the time and talk to my father,” Ellen Harper recalls. “They were both very interested in the construction of instruments. My father pulled a Weissenborn (lap slide guitar) out of the shelf and handed it to David, and my father told him what it was and how people played it, and it came through that route all the way to Ben and gave the instrument global awareness.”

Ben says his grandparents were a big influence.

“My grandparents pretty much brought folk music west, and the store became a hub for all things cultural, political and musical. It was a real special upbringing.”

And although Childhood Home largely celebrates a bonding experience between mother and son, both Harpers say recording the album also allowed them to view each other in a different light.

“I don’t know if there’s anything more gratifying than having your adult child recognize you as a fully realized human being, rather than just mom,” says Ellen. “We often take our parents for granted.”

Adds Ben: “There’s nothing more fulfilling than having your parents realize that you’ve become an adult, and trust you as that. It’s been an ‘arrival’ — I think that’s a fair way of putting it.”

Now that the album’s arrived, is a mother-and-son tour in the offing? Ben hedges at first, and then admits that he’s doing a solo tour in Europe that will feature his mom on a few songs before it bounces back to North America for some summer dates with Musselwhite, appearing no closer than Ottawa.

As for the actual Mother’s Day itself, Ellen and Ben will be in Italy sharing “a nice bowl of pasta:” a gift, as one of Harper’s pals recently suggested, that should set the musician up as “good for the rest of all Mother’s Days.”

Be the first to comment on "Ben Harper on making music with his mom Ellen: ‘There’s nothing cooler’"