“This lady is really special,” the legendary producer says of his 20-year-old Canadian protégé.

Montreal’s Nikki Yanofsky got some not-so-secret assistance on her latest album, Little Secret.

You can’t do much better than having Quincy Jones, the dominant producer behind Michael Jackson’s three blockbuster albums Off The Wall, Thriller and Bad, and arranger and conductor of such Frank Sinatra classics as “Fly Me to the Moon,” in your corner.

Since the early 1950s and his initial days accompanying Lionel Hampton and Dizzy Gillespie, Jones, 81, has built a reputation as one of the greatest influencers of 20th century contemporary music in his capacities as trumpeter, bandleader, composer, arranger, conductor, producer and executive. Still a prominent force in today’s music scene, the 27-time Grammy Award recipient served as executive producer of Yanofsky’s Little Secret.

If that isn’t enough, the impresario also co-manages Yanofsky, and was in Toronto during Canadian Music Week to, among other things, throw his support behind his 20-year-old Canadian protégé and personally introduce her during her album release party at Revival on Friday night.

“This lady is really special,” he told the packed crowd. “She can sing like Ella (Fitzgerald), and she can kick it baby, she can kick!”

And with that endorsement, Yanofsky and a seven-piece band that included a three-man horn section, revealed her new aggressive sound that is still rooted in the jazz she’s been singing since she was 5, but infused with R&B-scented pop, somewhat comparable to Jully Black’s more upbeat fare.

“I would describe it as accessible jazz,” Yanofsky revealed in an interview earlier in the day. “Jazz-hop is what I’ve been calling it, but it’s rooted in jazz and for me, there are a lot of pop elements, but I feel there are more jazz elements than pop.”

From the first note of “Little Secret,” anchored by pedal piano note and spiced up by the presence of sax, trombone and trumpet, and the punchy arrangement behind “Something New,” which showcased Yanofsky’s powerful roar while interpolating melodic references to Jones’ evergreen classic “Soul Bossa Nova” (or as we know it here in Canada, the theme from the defunct game show Definition) and Herbie Hancock’s “Watermelon Man,” the music swung heartily, even if some of the subsequent numbers seemed mild by contrast.

And although she threw out a couple of standards — a fairly straight jazz interpretation of “Witchcraft” and a curious update of Louis Armstrong’s “Jeepers Creepers” — the release of Little Secret marks an important transition, both as a singer and a songwriter, in terms of confidence and maturity, since the release of 2010’s Nikki.

“The original songs were kind of all over the map on the last one,” admits Yanofsky, who will tour Canada in the fall after playing the summer circuit of European jazz festivals.
“I was super young — I was 15 when I was writing those songs, so I’ve definitely grown a lot as a singer, artist and a writer.”

If only every aspiring musician could be privy to the experience Yanofsky has already accumulated in eight short years: touring with the late Marvin Hamlisch; jamming with Stevie Wonder; parachuted last-minute into a Montreux Jazz Festival headlining slot with Herbie Hancock; sharing lead vocal duties with Gloria Estefan and singing at a Barbra Streisand tribute with the legendary performer in the house, and of course, singing the Vancouver Olympics theme “I Believe” — all before she was 19.

Yanofsky met Jones when she was 14, at a time when she was beginning to work on an album with another legendary Grammy-winning producer, Phil Ramone.

“Quincy had heard about me from a mutual friend of ours, but also because he heard from Phil; they worked so closely together throughout the years,” Yanofsky recalls.

The mentor-student relationship was cemented a year later when Yanofsky, playing a show in Rotterdam, ran into Jones in the hotel lobby.

“He ended up sitting with me and chatting for awhile about music, and he ended up asking what I was doing that Friday, the one day I didn’t have a show. And he said, ‘Alright, perfect, you’re going to come to Montreux.’ And I did the festival with him and Herbie Hancock and Richard Bona and Greg Phillinganes. I’ll never forget that. I was rehearsing with Herbie Hancock and I was freaking out.”

Since that moment, Jones has recruited her as a rotating member of Quincy Jones Global Gumbo All-Stars, a collective of young, gifted musical prodigies from around the world that tours frequently.

On Saturday, Jones, whose list of superstar discoveries ranges from Will Smith to Oprah Winfrey, told JAZZ FM’s Ross Porter in a CMW interview that he’s smitten by Yanofsky’s ability. 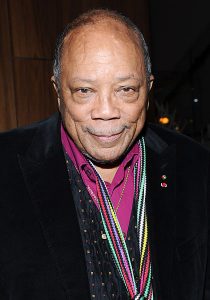 “Nikki is one of the most talented kids on the planet. I’m not kidding,” he said. “What I love is she brings all the roots of the best we have of the past and putting it in the present, because literally, that’s how jazz stays so powerful.
“Nikki is the bomb. All I can say is that she is frightening. Don’t fail to listen to her, because this lady is just starting.”

“He was the exec producer on Little Secret, and in terms of artistic decisions, that’s how he manages,” Yanofsky gushed in the lounge of a downtown hotel. “I would basically finish a song and say, ‘OK, what do you think of this?’ and he would suggest, ‘Take off that horn line, or add this here. Make the bass louder. Put a scat here. Put a harmony on this line.’
“It’s amazing that he’s in my corner. I can’t even put into words how appreciative I am of everything that he’s done for me, and just the fact that he really believes in me means so much.”