If there was a moment that truly encapsulated the essence of the Vans Warped Tour, whose 17th edition entertained tens of thousands at Mississauga’s Arrow Flats (a fancy name for “parking lot”) on Friday night, it was provided not by mainstream headliners like Paramore or 3OH!3, or still-on-the-rise glam metallists Black Veil Brides or rubber-tongued Alabama rapper Yelawolf, but by Florida ska-punk veterans Less Than Jake. 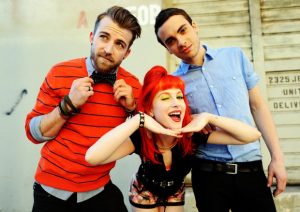 In the spirit of crowd participation, Less Than Jake singer Chris Demakes — whose band has been around the block a time or 10 — invited a long-haired fan onto the stage during “All My Best Friends Are Metalheads” for the sole reason of shaking his golden locks to show everyone “how head-banging is done.”

He then one-upped himself a moment later, blaming Stratford wunderkind Justin Bieber for a rash of bad Canadian haircuts, plucking a 16-year-old youngster from Detroit out of the crowd, and ordered the horn section to gift him with a Mohawk, shaving the kid’s head while they tore through “Soundtrack Of My Life,” jokingly rechristening him as “Bustin’ Beaver.”

Then, as a reward for his tolerance, Demakes tried to convince a woman to make out with him on stage. That didn’t happen, but the genial levity amid the disciplined performance emphasized the two aspects that the Vans Warped Tour offered in spades: fun and great music.

There was plenty of both under the cloudless, sizzling summer sky. For $45 at the gate, you got 10 hours of music featuring 74 acts, seven stages, inexpensive swag, plenty of autograph signing and three Bieber jokes — sort of a Barnum and Bailey’s for the skateboard set, minus the rides. 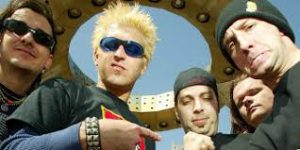 Although the Vans perception is one of catering to the alt punk/screamo/death metal crowd — and believe me, there was plenty of that, as the relentless pummelling of Massachusetts band The Acacia Strain strongly attested — there was a generous variety of genres being displayed, some such as the saccharine, synthesized dance pop of Stephen Jerzak unexpectedly leaning toward teenybopper fandom.

“Give it to me, Canada!” yelled grinning singer Hayley Williams, gamely engaging the crowd in a sing-a-long for “Ignorance” and bouncing and dancing around the stage when she wasn’t emptying her lungs. The entire band was playfully energetic, with guitarist Taylor York rolling across the bent back of bassist Jeremy Davis during the high octane “Here We Go Again” during one of the quintet’s more impressive displays of athleticism.

But Williams is clearly the star of the band, and the audience embraced her with genuine affection.

Florida’s A Day To Remember, the second most popular draw of the day, offered a considerably gruffer version of “All Signs Point To Lauderdale,” with singer Jeremy McKinnon adding an even bleaker notion to life in a dead-end town with his gravelly tenor. Also stellar: Cincinnati’s Foxy Shazam, an alt-rock roller coaster of unpredictability, punctuated by wickedly whiskered Sky White jumping and stomping on his keyboard and seemingly detached singer Eric Nally suddenly tumbling across the stage and right himself in between lines. 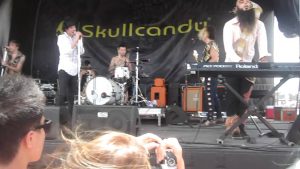 The evening ended with Colorado’s 3OH!3, with principals Sean Foreman and Nathaniel Motte complemented by a three-piece band. Rousing, suggestive dance hits “My First Kiss” and “Don’t Trust Me” were among the fare that got the masses throwing their hands in the air and bouncing to the beats, with the duo milking every last ounce of energy from the few thousand that remained.

Be the first to comment on "Warped whips up crowd"