The sun wasn’t the only thing blazing at Downsview Park this past Saturday.

The 17 acts that comprised Edgefest 2011 all packed their own heat, offering a solid 10-and-a-half hour marathon of sweltering rock ’n’ roll in various guises, headlined by Chicago melodic punk activists Rise Against and eagerly lapped up by 16,000 ecstatic beer-swilling music aficionados.

A stellar lineup split between two stages that included A Perfect Circle, Winnipeg’s Weakerthans and new blues rock sensations The Sheepdogs, bolstered by a local contingent that included a healthy representation from the Hamilton/Burlington area (Arkells, The Reason and the newer wave of Monster Truck, Harlan Pepper, San Sebastian and Sandman Viper Command, please take a bow) and Toronto’s own Dinosaur Bones and Ko reveals just how much immense and promising talent much of the 416/905 Golden Horseshoe area has developed and delivered over the past decade. 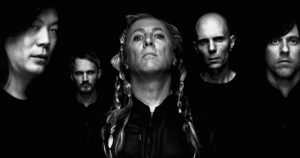 That fact was not lost on Rise Against singer Tim McIlrath, who repeatedly complimented the Toronto scene, namedropping Billy Talent, Cancer Bats and others, and gratefully mentioning “how fortunate we are to be playing with great bands.”

Of course, Rise Against can count itself as prominent among the polished, capping the evening with a furious 90-minute hardcore assault of sober social and political messages that began with “Critical Mass” and ended with the night’s only encore, a rapid fire trilogy of “Entertainment”/ “Savior”/ “Give It All.”

“I missed Canada,” McIlrath said at one point, as the four-piece band performed against a backdrop of a clenched fist penetrating the American flag, and a wall of speakers that stretched the width of the stage.

Despite its dominantly aggressive set liberally extracted from its four most recent albums, including 2011’s Endgame, Rise Against did leave room for nuance: Midway through the show, McIlrath was left alone on stage to strum acoustic for “Swing Life Away,” continuing on the same path for “Hero of War” until band mates Zach Blair, Joe Principe and Brandon Barnes rejoined him to pump up the song to a powerful climax.

McIlraith’s personal engagement was a stark antithesis to the lead up set by A Perfect Circle, touring for the first time in seven years.

The brainchild of guitarist Billy Howerdel and Tool singer Maynard Keenan was anything but touchy-feely, although, let’s face it, the pigtailed Keenan is the poster child for alienation.

Commencing with the subdued tones of “Annihilation,” Keenan was isolated on a riser situated well behind Howerdel and bassist Matt McJunkins, and moved little during his performance except for the occasional side-to-side swaying while watching Howerdel or second guitarist James Iha play their blistering solos.

But he sang well during the short-and-sweet 50-minute set — “Weak And Powerless,” the brand new “By & Above” and the detached cover of John Lennon’s “Imagine” being particular standouts — even if he appeared to just be putting in the requisite amount of effort and time needed to perform the gig.

A Perfect Circle’s cold exterior aside, you couldn’t have asked for a more perfect day to work on your tan while listening to great — and mainly Canadian — music.

The crowd was an even-steven male to female ratio of music lovers ranging from their 20s-to-40s, and the chance to walk around with some beer and enjoy healthy food fare like wraps, steak, portobello and pulled pork sandwiches — as well as the standard concert fare of burgers and pizza — was a refreshing change.

If there was a blemish on the Edgefestivities, the sole disappointment was the side stage whenever sets with the main stage overlapped. The fact that side stage bands continued to perform with the main acts infiltrating their eardrums was nothing short of impressive, although sympathies are particularly extended to Harlan Pepper, whom, besieged by a technical difficulty that silenced guitarist Jimmy Hayes for most of the set and then were cut short, managed to impress all the same with their blues-tinged music.

And although the “Edge” in Edgefest might refer to innovative music, the next big thing may ironically be Saskatoon’s The Sheepdogs, a four-piece throwback to the halcyon Southern rock era of The Allman Brothers and Lynyrd Skynyrd. 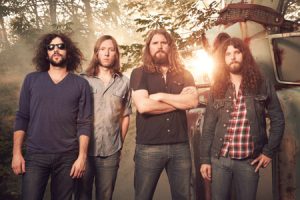 Led by the whiskey-soaked tenor of Ewan Currie, the shaggy-haired Sheepdog sound harkens back to blues-driven guitar solos and a healthy side order of jamming. Relegated to the sidestage, the band — which is currently the finalists for a Rolling Stone cover and next returns to Toronto for a not-so-surprising August 7 appearance at Beerfest — commanded its own vocal throng of diehard supporters.

They were amply rewarded with some fine showmanship from the duo of guitarist Leot Hanson and bass player Ryan Gullen, who arched backwards leaning against each other’s shoulders while playing some fine licks. “Southern Dreaming” and “I Don’t Know” were the 20-minute set highlights, but upon watching and hearing them you can understand how the U.S. will be clamouring for them in the very near future.

Shout-outs as well to the confetti-filled Hollerado; aggressive urban funkster KO and Arkells, whose energetic rendition of “John Lennon” left the crowd begging for more.