With a big voice, and a big venue, Josh Groban did his best to make those intimate connections with fans.

Nick Krewen
Special to The Star,
Published on Mon Jul 18 2011

Josh Groban is all about breaking down barriers.

Returning Monday night with a considerably different show than his extremely intimate “Before We Begin” two-accompanist affair, which stopped off at the Queen Elizabeth Centre earlier this year, Groban expanded his support group to a 13-piece band that included a trumpet, a trombone, two French Horns and a four-piece string section — mainly to take advantage of the orchestral palette that imbues some of his earnest, neo-classical songs.

But however he may be perceived, the genial Los Angeles native went out of his way during his 20-song set to make his show fun, interesting, interactive and intimate. He largely succeeded despite being hampered by the cavernous sound of a semi-filled Air Canada Centre. 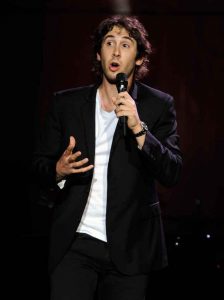 Determined to keep it light and as spontaneous as big-ticket concerts allow, Groban threw the first curveball at the very beginning of his two-hour set: allowing his horn and string players to introduce their presence on the main stage with an instrumental version of “Straight To You,” while he snuck to a smaller stage within the bowels of the arena, sat down at an upright piano and proceeded to serenade the approximately 8,500 in attendance with “Changing Colors.”

He then segued into the first big gun of the night, “February’s Song,” from 2003’s Closer, his running shoes tapping the piano pedal as his fingers lyrically rolled around the keys, before addressing the crowd and warmly welcoming them to the show.

“You guys paid through the wazoo to be here tonight,” Groban stated, “The least I can do is sing my ass off for you.”

And he made good on his promise, singing his posterior off with a top-flight selection of favourites from his four multi-platinum studio albums, including the recent Rick Rubin-produced Illuminations.

While he often overpowered his talented band with that impossibly big voice of his, an absorbing baritone that had no trouble reaching the Air Canada Centre rafters, the David Foster discovery found some of his more tasteful nuances lost in the cavernous reverb of the building.

But he did his best to showcase a versatile voice, one that glides easily up to falsetto on crowd-pleasers like “You Raise Me Up” and is even capable of dispensing some soul, as he did so brilliantly on the raucous “Machine.”

Groban, who follows Monday night’s gig with one on Tuesday at London’s John Labatt Centre, is a little difficult to pin down, genre-wise: some call him classical crossover, except his voice doesn’t really have the straight-laced discipline to handle pure opera — although the power is certainly there. He also defies consideration as a pop singer, as the sheer strength of his voice tends to place him in the more formal category for casual classical listeners.

But demonstrating his prowess with foreign languages — he waited until the fifth song before articulating the “Oceano” in Italian and then switching to Spanish for “Alejate” — Groban proved himself an expressive interpreter and a strong ally for the argument that music is indeed a universal language.

He’s also a decent writer, delving into “The Bells Of New York” and “Higher Window” with the grand, sweeping melodrama expected of someone of his stature.

But even though he possesses the magic weapon of a warm, flexible timbre, Groban went out of his way to prove he’s just one of the guys.

Several times during his show, he ran through the crowd, slapping hands and engaging different people in short conversations.

He even, by request, sang some of his infamous Kanye West tweets.

You certainly wouldn’t see Placido Domingo inviting people on stage and pouring them wine while he sang to them.

A definite crowd-pleaser, the only complaint is that Groban needs a more suitable venue the next time around.