Keith Urban’s prowess and that of his crack band coaxed fresh depth out of his songs at the Air Canada Centre.

Many have talked the talk when it comes to promising something innovative in a country music concert format, but at the Air Canada Centre over the weekend, Keith Urban actually walked the walk. 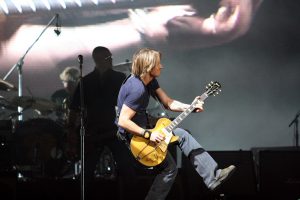 For the majority of his very loud two-hour-and-20-minute Saturday night gig in front of an estimated 15,000 people, Urban delivered what many have aspired but failed to do for his current Get Closer tour: perform a country music show that bared its rock’n’ roll heart.

Tilting the odds in his favour is the fact that the the Australian is an exceptional guitarist — a talent comparable to Eric Clapton in terms of six-string technical prowess — and it made all the difference in terms of offering a lot more mileage than country audiences are used to receiving.

Typically, it breaks down like this: Act plays song, and maybe there’s an extended middle-eight break where the players gets to pick a little longer and show that he has the skills for maybe a millisecond, and then the Act returns to the regularly scheduled programming and finishes the song just like it’s heard on the radio.

In the case of Nicole Kidman’s Grammy-winning woodshedding hubby, it was an opportunity to use the instrument as a catalyst to push the emotional envelope of the song to embody meaning beyond words, as he did on several numbers, stretching out “Stupid Boy,” and “’Til Summer Comes Around” to explosive heights.

The soaring solos and coda extensions added impressive gravitas in a unique setting that fans could call and claim as their own; one that couldn’t be replicated by dialing in a simple request to their local radio station.

Aside from Urban’s ability to provide transcending moments, he also wasn’t afraid to play some of his wall-to-wall hits by the book. Backed by a stellar four-piece that included old Ranch hand Jerry Flowers on bass, up-tempo Urban love songs like “Days Go By,” “Long Hot Summer” and “Raining On Sunday” raced along on their own momentum, the crowd eagerly wailing along as unofficial harmony singers, recognized whenever the host turned his microphone towards them and cajoled them to sing louder.

The stage set included a giant screen projecting all the Urban and band action and several videos that magnified the singer and songwriter’s hunk factor, but the most impressive bell-and-whistle aspects of the show were the numerous hydraulic spotlights wheeling around the curves of looped Roller Coaster trestles next to the screen. 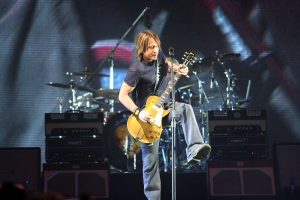 Urban also tried to live up to the parameters demanded by the Get Closer tour, named after his latest album: Besides two satellite stages, Urban moved to a small mid-arena rotating platform for a trio of hits (“I’m In,” “Blue Jeans” and a poignant “You’ll Think of Me”), and most impressively to another stage located in the stands for a rousing “You Look Good In My Shirt,” after which he signed his guitar and gave to an elated young fan who looked as though she’d just won the lottery.

And as a Country Music Award Entertainer of the Year nominee might be prone to do, Urban also turned “Kiss A Girl” into a hilarious singing contest between three women and a guy, with the eventual winner, Sara from Brampton, joining him at the mic to finish the song, as he gave her a hug at the conclusion of the number.

Newcomers and five-time CMA nominees The Band Perry, a sibling trio from Mobile, Alabama, certainly made a case for longevity with a decent half-hour set of material from their self-titled debut, with the exception of an inexplicable cover of “Fat Bottomed Girls,” written by country music icon Freddie Mercury (he wrote sardonically).

Miscue aside, The Band Perry doesn’t necessarily have a unique sound, but it does have a star in front woman Kimberly Perry, who compensates in personality what the trio lack in originality. She was a pleasure to watch, and quality songs like “If I Die Young” and “You Lie” suggest longevity is at hand.

But it was the headliner, whose performance was anything but sub-Urban, that exemplified the marriage of rock and country at its most harmonious and satisfying.

Be the first to comment on "Urban renewal, thanks to country"