A few days after becoming a YouTube viral sensation with his surprising acoustic guitar recitatives of the Black Eyed Peas hits “I Gotta Feeling,” “Rock That Body” and “My Humps,” Wilco principal Jeff Tweedy is still feeling somewhat shell-shocked.

“It’s kind of mortifying, mostly,” comments Tweedy from his Chicago home town, 10 days prior to his band’s weekend residency at Massey Hall September 16-17 to preview its latest album The Whole Love, out Sept. 27.

“I didn’t have any anticipation of that at all. I didn’t even expect people to be filming it.”

Tweedy, whose exploits was trumpeted by gossip website TMZ.com among others, says he specifically performed at the local book launch of author Dan Sinker, whose work The F–king Epic Twitter Quest of @MayorEmanuel, asks Jeff Tweedy of his imaginary world to play Black Eyed Peas covers. So I’d thought I’d give it a shot.”

The 44-year-old Tweedy hopes that he didn’t give the wrong impression about his take on the music of Will.I.Am, Fergie and company.

“I certainly didn’t mean to make it look like I was making that much fun of the Black-Eyed Peas — I really wasn’t,” insists Wilco’s chief singer and songwriter.

“I was more bemused at my inability to pull it off,” he laughs. “I’m unhappy if anybody thinks I was trying to make fun of anybody else’s music in a mean way. I felt more like I was poking fun at myself.”

“But it really f–ked up the rollout of our new record.” 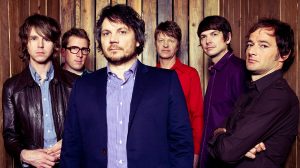 Wilco’s eighth (if you exclude the Mermaid Avenue collaborations with Billy Bragg) and latest studio album, The Whole Love, is as stylistically different as each of its predecessors: the 12-song grab bag runs the gamut from electronic rock jams (“Art of Almost”) and booming alternative folk (“I Might”) to ghostly balladry (“Sunloathe”) and country odes (“One Sunday Morning.”)

Tweedy admits that although there’s usually no grand conceptual plan associated with creating his band’s albums, the early stages of The Whole Love recording sessions leaned at times toward a sound a lot closer to the alt-country classic A.M., the band’s 1995 debut and first after Tweedy dissolved the influential late ’80s outfit Uncle Tupelo he’d founded with Jay Farrar.

“There was some idea early on that there were two different types of records that we could make — a rock type record and then a more acoustic, folk and country record,” Tweedy concedes. “But at some point, that notion just stopped making sense when the songs themselves started making more sense together.

“I think it’s either due to our inability to focus and be disciplined that they all end up making the same record, or a more honest representation of the band and what we like to do. The latter is probably more the case.”

There was another transition that Tweedy and bandmates John Stirratt, Glenn Kotche, Mikael Jorgensen, Nels Cline and Patrick Sansone experienced between 2009’s Wilco (The Album) and The Whole Love: a departure from The Warner Music Group and a chance to form their own label, dBpm Records. 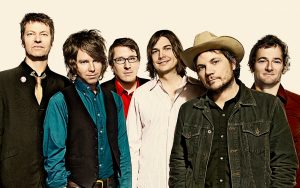 But Tweedy says the perception of artistic emancipation is solely a public one.

“Whether we’ve warranted it or not, we’ve felt pretty free to do we’ve wanted for a pretty long time,” he explains. “There hasn’t been a label presence in the recording studio with us since (1999’s) Summerteeth.

“Putting out the record ourselves is where I feel the biggest difference. It’s been really fun to let the process be a bit smaller and more manageable. On a business level, there’s not a lot of monetary waste. We aren’t sharing a big chunk of the pie with somebody where we think we’re doing a lot of their work.”

He also says there’s no hidden references behind Wilco’s cover of Nick Lowe’s “I Love My Label” — the B-side of their new single “I Might” — to their previous label situation. Nor is it the reason they landed Lowe as a warm-up act for 14 of their 24-show tour, including the Massey dates.

“We loved that Nick Lowe song, and we recorded it sincerely without irony,” says Tweedy. “The touring is just a whim. We’re big fans, and we were wondering if it was even possible that he might be interested in doing it, and he was into it. So we’re absolutely thrilled — shocked, actually — that he’s going to be on the road with us.”

Tweedy’s next Toronto appearance occurs sooner than later: he’s booked for Feist’s invite-only concert at the Glenn Gould Studio on October 8 to celebrate the CBC’s 75th anniversary and introduce her new album Metals.

Although he sang “You And I” with Feist for Wilco’s last effort, Tweedy isn’t sure what his guest role will be.

“I don’t know anything other than Leslie invited me to come play and that it was really cool of her to think of me,” says Tweedy. “She’s so generous with her time with Wilco and joining us on stages around the world and on TV shows. It was really an honour to get invited, so I’ll be there with bells on.”