Nick Krewen
Special to the Star,
Published on Tue Sep 20 2011

Throughout the history of contemporary music, the domain of the lightning-fingered guitar hero has been inextricably defined by testosterone-driven DNA.

But for every six-string trailblazer named Van Halen, Beck or Frusciante, there have been gifted female counterparts who have also pushed the envelope — Jennifer Batten, Orianthi, and Ruyter Suys among them.

While some may count New Yorker Marnie Stern, who returns to the Wrongbar Friday for a 10 p.m. show with openers No Joy, as a worthy member of the club, Stern herself feels it’s more her approach than her ability that is earning her similar praise. 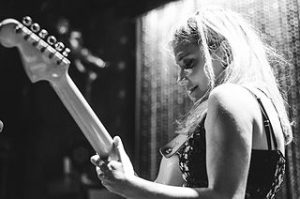 But the Kill Rock Stars recording artist — who offers a dynamic song called “Female Guitar Players are the New Black” on her 2010 self-titled album — says that gender discrimination surrounding the issue still exists.

“Absolutely,” responds Stern over the line from her native New York City, in between demos for her fourth album, due next year.

“Unfortunately, when a woman plays the guitar, a lot of focus tends to be put on it, regardless of the skill level. I don’t think I’m that terrific of a guitar player, but I think I put together some interesting parts and that’s what I’m more focused on.

“All the accolades and kudos I get for being a good guitar player — and I don’t know about that — but in that respect, it’s different being a woman.

“I consistently get asked, ‘What’s it like to be a female guitar player,’ but it’s all I know.”

Stern’s first three albums — 2007’s In Advance of the Broken Arm, 2008’s This Is it and I Am It and You Are It and So Is That and He Is It and She Is It and 2010’s Marnie Stern — are an intriguing mix of hard-rock cacophony, dazzling showmanship, angular riffs and vocal caterwaul.

As a guitarist, Stern has been lauded for her rapid tapping technique, a looping ostinato that’s reminiscent of fellow string-bender Adrian Belew. But the 35-year-old explains that the numerous sonics she coaxes from her instrument have more to do with expression than exhibition.

“I don’t use the tapping as a show-off,” she explains. “My intention is to use it to access a lot of notes and focus on different rhythms within my songs — that’s the most important point for me, with the type of music I do.

“I also do it because it’s very colourful — and also because it’s fun and easier to use both hands. It wasn’t like I listened to a lot of Van Halen and then said, ‘Hey, I want to do that.’

“What inspired me was very brave, experimental weird noise music that was mostly instrumental, bands like Don Caballero who were doing a lot of tapping — so I just started trying it out too.” 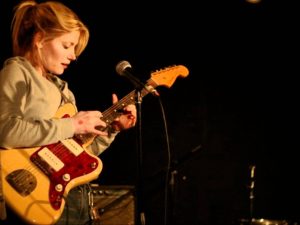 Although she lists such alternative rock icons as Sacramento two-piece Hella and San Francisco’s Deerhoof as influences, a query about her favourite female guitarist yields a surprisingly conventional answer.

“Nancy Wilson from Heart, I like her style of playing,” admits Stern, who once opened a Flaming Lips show at an L.A. cemetery. “But I never really focus on female and male players. I just generally tend to gravitate towards people and bands that I think play interesting parts, and how they interplay together.

“I like stuff that’s all over the map — experimental noise and classic rock — and as long as they’re bringing their personality into the music, I’m usually driven to it.”

Stern, who had been kicking around the Big Apple indie scene for more than a decade before landing her Kill Rock Stars deal, had studied journalism at New York University before deciding music was her true calling.

“I just decided it was something I had always wanted to do, but thought that I couldn’t for a lot of reasons — one, I grew up in New York around a lot of people where everyone became a professional, and they just didn’t even think it was an option in that respect. I also thought that to be musical, you had to have a gift of musicality — that you had to be born with it. And that’s not necessarily true.

“So I just decided to be as creative as possible with the guitars and the songs. I’m always trying to get different ideas out of the guitar. I look at it not just as an instrument, but in different ways.”

If that’s an unusual point of view, it’s a trait Stern relishes in herself.

“One of the things I guess that I’m most proud of is that I don’t really fit into any genre, and I like that,” she admits. “Ironically, it becomes difficult from a marketing perspective because there’s no crate to box me into.”

So you can anticipate unconventional things from Stern’s trio at the Wrongbar, don’t expect her Kissing Booth, something she launched a few years back to help pay for parking tickets.

Types of kisses were determined by donation, but Stern says her current boyfriend killed the idea.

“There was a girl in the band at the time, and we were both single,” she recalls. “And we thought it would be fun. But you’d be surprised that there weren’t many takers and we were pretty insulted about the whole thing.

“I think my puppy got more kisses for a dollar than we did.”

Who: Marnie Stern, No Joy, the Raincoats and Grass Widow

Tickets: $14 from Ticketmaster, Rotate This or Soundscapes