Then you realized it’s about an armed teenager going on a violent high school rampage.

“I like to undercut the hopeful music with a something a little bit more broody,” admitted singer and principal songwriter Mark Foster over the phone over the summer, as the single’s infectious power just kept pushing the band forward. They sold out Lee’s Palace in April; they were, as Foster chatted, on their way to selling out the larger Mod Club in June and presenting at the MuchMusic Video Awards; and now they’re playing the even larger Sound Academy this Saturday.

Again, no tickets are left. 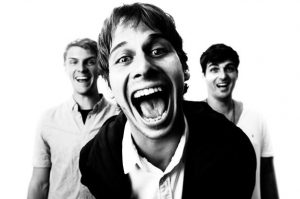 “ ‘Pumped Up Kicks’ — I guess the best way to put it is that it’s a social observation on American youth: I wrote the song in character, and I really wanted to get inside the head of a teenager that basically had nothing left to live for; really break it down psychologically and tell the story through his eyes.”

Although Foster maintained the song isn’t based on a singular incident, he says there is an alarming trend of young kids resorting to violence.

“The song is not about any specific event other than it’s happening all the time now,” said former Cleveland resident Foster, 27. “I remember 10, 15 years ago — this never happened. And now every year, a couple times a year, kids are killing other kids, killing other people.

“So I started asking myself, ‘what is deteriorating in this country? Why is this happening?’

“It’s turning into somewhat of a psychological epidemic. I wanted to write a song about it.”

The tune was released online in early 201 and was a smash hit with bloggers and indie-music fans then; this year, it’s the mainstream’s turn. The undeniably catchy tune has catapulted the L.A. indie pop trio on the fast track to stardom: together only since October 2009, Foster and his pals Cubbie Fink (bass) and Mark Pontius (drums) were signed to Star Time/Columbia Records on the strength of the song’s reception during a Nylon magazine Internet campaign for fashionista Anna Sui, and on influential California radio station KROQ.

They’ve been touring the world for the past 18 months — including buzz-filled slots this year at SXSW and Coachella — with no end in sight. (Guitarist and keyboardist Sean Cimino and keyboardist Isom Innis supplement the live band.) As the single keeps reaching more people, there are new waves of popularity; this week a dancer known as Nonstop dancing to a dubstep remix and it quickly garnered a million and a half views on YouTube. 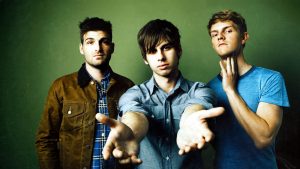 “It’s been a fun ride, so far,” said Foster, who also plays guitar, synths and drums. “It started February 2010, then it ramped up pretty quickly. Honestly, from March 2010 until now it’s been pretty non-stop.”

The emotional dichotomy featured in “Pumped Up Kicks” — shiny melodies, overcast lyrics — seems to be a hallmark of the Foster The People sound, as indicated on its recently released 10-song debut album Torches.

“Helena Beat” — which Foster describes is about struggling artists and the “mirage” of Hollywood glitz and glamour; “Call It What You Want;” and “Houdini” all have darker, cynical subtexts, but he maintains empowering songs like “Waste” and “Don’t Stop (Color On The Walls)” suggest a more optimistic outlook.

“I think there’s a lot of hope on the record, honestly,” he offers. “The underlying theme for the record is hope for the underdog. ‘Pumped Up Kicks’ is the darkest song on the record, but — even with ‘Helena Beat’—it’s like challenging for someone to change, or at least relating to someone who is going through that experience.

Citing Beach Boys pop guru Brian Wilson, New Order and Gorillaz/Blur’s Damon Albarn as influences, Foster’s prowess as a melody writer earned him a full-time gig writing jingles at L.A. and New York-based boutique ad agency Mophonics (you can hear some of his work here) where he worked on campaigns for Chevron, Musclemilk, T-Mobile, California tourism and others.

“Being in that field really helped me to learn how to work quickly and still produce good music,” recalled Foster of his day job.

“It’s a very fast turnaround, and you don’t have a lot of time to work on things. You have to turn it around and still make it sound like it’s good and very competitive. It really just sharpened my skills as a producer.”

Mophonics also gave him access to a studio “that I could use day or night.”

“Most of Torches was written there at that studio,” he conceded. “That’s where I wrote ‘Pumped Up Kicks’ — I was working during the day — I had some down time and wrote the song. I think being surrounded by instruments — and having good engineers — I learned a lot in the small period of time I worked there.”

Foster loved Toronto when his band played Lee’s Palace in April and hopes to see the city this time around.

“There’s so much I want to explore in Toronto,” he said. “I know it’s a foodie place and we’re all foodies. I’d love to eat some good food while I’m there.

“Toronto’s got a good vibe.”