Aaron Bruno and his band come to Sound Academy after rescue from career limbo.

AWOLNation principal Aaron Bruno admits he was at the end of his professional tether when Red Bull Records — a subsidiary of the Austrian manufacturer that markets the popular high-energy drink — threw him a lifeline.

After suffering the loss of two record deals — the first with his rock band Hometown Hero on the Maverick label, and the second with his “too pop to be alternative and too alternative to be pop” outfit Under The Influence of Giants on Mercury Records — Bruno decided to go the solo route with AWOLNation, which performs at the Sound Academy Thursday night. 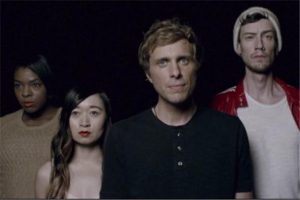 “I was very down and out after the Giants broke up, completely broke, trying to figure out a way to make money without having to completely throw in the towel and stop doing music,” recalled the 32-year-old California native over the phone from Detroit on Sunday.

“I was aspiring to write pop songs, and basically Red Bull and a couple of labels caught wind of the songs I was putting out independently. I played a couple of shows around L.A. and before you knew it, I went from recording songs in a spare bedroom in my girlfriend’s parents’ house — because I had nowhere else to go — to an $8-million studio in Santa Monica that I was free to use.”

Bruno found himself quickly gaining radio attention with “Sail,” an electronic dirge that has an industrial edge, but a pop aesthetic — and a song he said was initially a distraction that took him less than an hour to record.

“That was written at a time where I didn’t know what direction I wanted to go,” says Bruno. “I was sitting at the studio trying to make these little pop songs for aspiring pop artists for chump change — barely enough money to buy a bean and cheese burrito.

“I thought, ‘Hey man, f— this, let’s do something really cool.’ So I came up with the string section part at the beginning, and the song just came to me. I recorded the strings, the beat and the synth — all within 45 minutes. My engineer went down the street to get some sodas for us, and by the time he got back, I’d sung the lyrics and it was done. It happened so quickly it was almost an accident.

“A few months later I overdubbed live drums on it.”

The modern rock radio charmer “Sail” was initially part of a five-song EP called Back From Earth, but a combination of the song’s rising popularity and Bruno’s desire to write more tunes, including a 14-minute opus called “Knights Of Shame,” prompted him to expand the project into the full-length, now gold, album Megalithic Symphony.

The 14 songs run the gamut from frantic energetic electronic dance pop (“Burn It Down,” “Soul Wars”) to short instrumental snippets (“Megalithic Symphony”) to light gospel-inspired soul (“All I Need”) and Bruno says he’s shooting for a genre-defying sound.

“I just want to make music that’s relatable to everybody — you, Mom, Dad, hipster, hip-hop kid,” insists Bruno, who says he had a happy, supportive home life.

“I’m trying to be non-specific, non-genre. If you listen to the record, you can tell it’s all the same source, but you can’t really pinpoint what exactly it is.”

Bruno repeats his props to Red Bull Records for allowing him to run wild.

“They didn’t want to change a thing I was doing — they just wanted to basically partner up and help me achieve what I wanted to achieve, “ he explains.

“I just wanted to put out songs. The last thing I wanted was to be bound to a label and not be able to release something.

“My last band made a bunch of songs for the next record that we put our heart and soul into. Due to horrible legalities, we weren’t allowed to release those songs. That was most devastating.”

But Bruno is not one to hold a grudge. Now as he tours North America with a five-piece band in tow, he remains philosophical.

“Just like anything else in life, it was very important to go through both the ups and the downs,” Bruno admits.

“I’m really grateful that I experienced disappointment early, because had I’d been successful, I probably wouldn’t have handled it as well as I’m handling it now. I feel like I have my head on my shoulders.

“But I had no idea that it would happen this fast. It really blows my mind every minute I think about it. I keep pinching myself — I feel like it’s a dream, you know?”