Oh, what that million-watt smile can get away with.

Jon Bon Jovi exercised his considerable charm over the predominantly female crowd Tuesday night at the Rogers Centre for the first of two shows, and truth be told, all he had to do was flash his pearly whites and the partisan crowd was putty in his hands.

“Finish the song!” he yelled during the end of the anthemic “You Give Love a Bad Name,” and the audience of about 30,000 complied by singing the final line. “Are you with me out there?” he cried after a spirited coda of “Old Time Rock and Roll” — the Bob Seger “jukebox” classic he conveniently segued into from “Bad Medicine” so he could bring out opening act Kid Rock for a guest vocal — and then wiggled his fingers to coax more volume from the cheering throng.

“I’m going to take every request I can here over the next two nights,” he promised. “Anything you need from me I’m right here, pleasing to serve.” 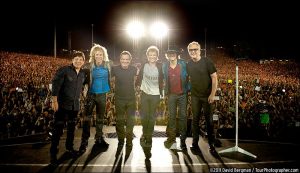 Again, the smile, and you could audibly hear hearts in the audience racing at the prospect.

Whether or not he actually received any requests is moot, because, contrived or not, Bon Jovi delivered exactly what the faithful expected; a driving two-and-a-half-hour show of his melodramatic against-all-odds melodic rock and roll; wall-to-wall hits culled from 11 studio albums that have sold more than 130 million collective copies around the world.

Handsome visage aside, he knows how to work his peeps, even if some of the performance tricks he employed have largely been copped by New Jersey’s other famous son, Bruce Springsteen — the egging on of the crowd, and the building of momentum through different dynamic levels, especially effective Tuesday night on “Love Is the Only Rule.”

Only Bon Jovi inflates the odds in his favour to larger-than-life stature: when he does something, he goes big.

Aided and abetted by a gigantic half-moon screen that alternately offered incredible split-screen visuals (sometimes there were as many as five Bon Jovis at once — a schoolgirl’s dream) and bright spotlights, the music and the effects dwarfed the cavernous Rogers Centre, although if intimacy was the desired effect, the setting failed miserably.

But Jon Bon Jovi and his cohorts, including Richie Sambora, never faltered in their determination to entertain. 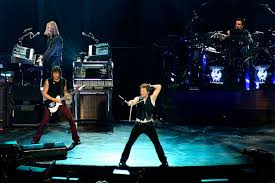 Kid Rock got the party started with a boisterous hour of no-holds-barred rock and roll that proved he was literally a man of many hats. He donned the fedora for such hits as “All Summer Long,” the cowboy hat when he leaned country for “Picture,” and a baseball cap when he took up the drums for “Cat Scratch Fever.”

Of course, there were plenty of flames and fireworks: you can never have too much heat at a rock ’n’ roll concert.