Singer Jack Johnson doesn’t rely on flash to impress the crowd at the Molson Amphitheatre. 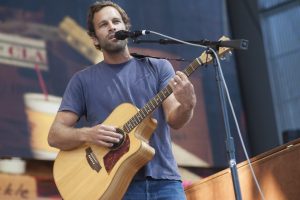 After successfully navigating through the slower intro of “Bubble Toes,” the surfing songwriter from Hawaii accidentally launched into the second verse of the lively love song once he switched tempos.

Johnson didn’t break a sweat, but instead just continued vamping along and admitted his mistake.

“I just get really excited when I want people to sing along,” he smiled, and carried on as if nothing happened.

It was one of the few dramatic waves of a two-hour show that found the environmentally friendly Johnson performing in front of a friendly environment of 16,000 kindred souls at the Molson Amphitheatre on Monday night.

That’s not to say the show didn’t have its lively moments, but for the most part, Johnson didn’t rely on any flash to impress the crowd, who were clearly there to hear him perform their favourites from a scattering of albums that included his sixth and latest studio effort, To the Sea.

Monday night’s performance was truly a testament to the power of the song, and whether it was the opening elastic funky overtones of “You and Your Heart,” a smooth segue into the nimble “If I Had Eyes” or a bit of a groovy workout to “Red Wine, Mistakes, Mythology,” people stood, swayed and danced to Johnson’s sweet, predominantly romantic odes.

Again, “understatement” was the key word here, with Gill flexing his occasional piano muscle to add a bit of meat to the arrangements whenever he was called upon to do so.

As for Johnson, he basically swayed and grooved along to the mood of the song, whether it was the relaxed reggae feel of “Wasting Time,” or throwing down covers of The Cars’ “Just What I Needed” or Steve Miller’s “The Joker.” The momentum continued to improve as the musicians advanced deeper into the set, with Johnson’s grin becoming wider and wider as the audience cheered louder with each tune.

Like the title of one of his songs, they were simply thrilled to let him “Go On.”

Be the first to comment on "Ever cool, Jack Johnson needs no flash"