Despite a disappointing lineup, Mary J. Blige, Sarah McLachlan and many smaller musicians played to an approving audience

The departure of several headliners from the Lilith tour — Kelly Clarkson and Norah Jones among them — meant that space had opened up for several domestic acts to demonstrate their creative wares at Saturday’s rain-drenched concert at the Molson Amphitheatre. 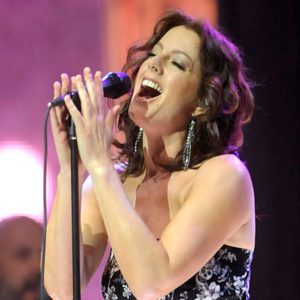 Whether it was the surprising choice of synth-pop-driven Lights or the rich piano-centric Chantal Kreviazuk assigned to the main stage; or country blues pop songwriter Melissa McClelland, heartfelt tunesmith Tara MacLean, Winnipeg rock duo Ash Koley or Perez Hilton discovery Darrelle London designated to the side stages, the sisters that did it for themselves not only won many new admirers among the respectable 13,142 ticket buyers, but more than compensated for the lack of marquee headliners that Toronto — one of the biggest concert markets in the world — merits.

The whole eight-hour estrogen embrace was anchored by the den mother of Canadian female singer-songwriters, Lilith co-originator Sarah McLachlan, who ended the evening with an inspired set that found her more carefree, charismatic and engaging than previously remembered.

Perhaps it was the presence of a superb band — including guitarists Luke Doucet and Peter Stroud, bass player Butterfly Boucher, former Grapes of Wrath keyboard player Vince Jones, drummer Matt Chamberlain, Melissa McClelland and cellist Kevin Fox — that relaxed her enough to free her from the piano a bit, or maybe it’s just enjoying the stage catharsis from the drama of her recent divorce, but McLachlan has never seemed more comfortable or playful.

“Sweet Surrender” was paced with a livelier tempo, and her stratospheric pitch that peaked with a lengthy note on “Possession” was fueled by the enthusiasm of a standing, cheering crowd that were happy to have her back in their presence after a lengthy absence.

Even the songs played from her new album Laws Of Illusion — the exuberant “Loving You is Easy” and the, as she called it, “sucker punch” of “Forgiveness” — had an extra spring, as if McLachlan has rediscovered the joy of performance and is lapping up every minute of it.

That McLachlan managed to hold her own momentum during her 50-minute set was particularly impressive, because Mary J. Blige blew the roof off the venue an hour before with an ear-splitting soul revival that was as uplifting as it was intense.

Blige may not be the most technically brilliant singer on the planet — when she gets into certain runs, she often veers from pitch, as she did on a few occasions Saturday — but she certainly works harder and more earnestly than most.

“I feel the warmth, Toronto!” she yelled after singing her heart out on “Real Love,” a gale-force arrangement fully powered by a 10-piece band that included four female backing singers and a kick drum that bored through the skulls of those patrons sitting back in the lawn section.

“No More Drama” and “I Am” were soulful and muscular, and her take on U2’s “One” was particularly spirited. The only misstep: a complete rendition of “Stairway to Heaven” — yes, the Led Zeppelin classic — that really didn’t add anything new or particularly different, even though Blige sang it as inspiringly as she could.

Still, that didn’t stop the crowd from giving her repeated thundering ovations — one of several that she earned throughout her 45-minute sweatfest.

Another main stager who really awakened the crowd to a new level of energy: Chantal Kreviazuk. Assisted only by cellist Kevin Fox (and he was everywhere on Saturday, also assisting Tara MacLean earlier), Kreviazuk coaxed a rich tapestry of colours from her grand piano and encouraged the crowd to stand up and sing along, particularly to her popular cover of John Denver’s “Leaving on a Jet Plane.”

A warm, friendly and spontaneous hostess, Kreviazuk injected her earlier hits like “In This Life” and “Weight of the World” with energetic panache. A special set-ending rendition of “Feels Like Home” with guest singers McLachlan, McClelland, Boucher and London was simply icing on the cake.

While the consistent downpour may have dampened spirits, it was the emotional outpour of Lilith participants that uplifted everyone in the end. Whatever problems the fest itself may be experiencing financially and logistically, it’s got nothing to do with spotty talent.