Welcome to her nightmares.

Welcome to her nightmares.

Psychiatrists would have a field day trying to figure out the meaning and the metaphors for what is going inside Rihanna’s head after what she unloaded on the Molson Amphitheatre audience Thursday night.

For her first headlining show, The Last Girl On Earth, the 22-year-old Barbadian R&B princess bombarded her audience with a steady stream of dark and apocalyptic imagery for more than half her 100-minute act.

In light of the domestic brutality she allegedly experienced at the hands of former paramour Chris Brown, a lot of the screened and mimed visuals were shockingly angry and violent.

With a tri-sectional video screen revealing the words “This is a dream, and when Rihanna dreams, they become real,” to the pre-recorded strains of “Mad House,” for the introduction, the two-time Grammy winner opened her show with the curious choice of “Russian Roulette,” a tear-jerking ballad on her fourth and recent album Rated R that is a tale of a dare with fatal consequences.

Dressed in an LED-beaded dark gown that literally lit up her body and physically transformed her into part of the light show, no sooner did Rihanna conclude “Roulette” when she was joined by six rifle-toting, helmeted dancers engaged in a Nazi march who “executed’ her by firing squad while dropping bombs filled the screens behind her.

The gunplay and war references didn’t stop there: the comely model, now wearing a flesh coloured, thigh-revealing leotard, donned her own helmet – albeit one with Mickey Mouse ears – for “Hard” and suggestively straddled the smoking cannon of a pink army tank located just off the front of the stage. 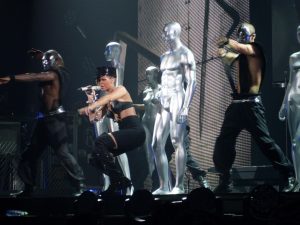 By the time the third song, “Shut Up And Drive,” had concluded, Rihanna had just bashed in the hood of a wrecked car with a baseball bat and was sporting a mischievous grin.

Apparently, she was just warming up, as the 15,000 in the audience—a 3:1 ratio favouring women to men – cheerfully egging her on. Following “Fire Bomb,” – with the molten electric guitar lead being provided by Extreme axeman Nuno Bettancourt, heading a seven-piece band – and an appearance by giant stilted monsters during “Disturbia,” Rihanna found it time to turn to her attention to something else: sex.

“Rude Boy” fulfilled that need, as four male “cameramen” tripped over themselves to video her while she posed seductively on a pile of TV sets.

The head-spinning array of bells and whistles more than made up for those who were hoping that lightning would strike twice with guest cameos by Rihanna superstar rap collaborators Eminem (the current chart-topping duet “Love The Way You Lie”) and Jay-Z (“Run This Town,” “Umbrella”), since both made surprise appearances at her former lover Drake’s hometown show Sunday.

Although this wasn’t in the cards, Rihanna did pull a page out of the Alice Cooper handbook with the appearance of gigantic stilted monsters that haunted and attacked her during “Disturbia.” She also borrowed liberally from Pink and dangled a pair of acrobatic dancers from machine-gun-shaped trestles for a bit of aerobic work during “Te Amo.”

There were also hydraulics galore, fireworks, a handful of costume changes and a parade of #1 pop hits – “Hate That I Love You,” “SOS,” “Wait Your Turn” and “Live Your Life”—with the occasional scent of dancehall thrown into the mix during the 23-song set list.

Distorted volume aside, the elaborate sophistication of Rihanna’s performance couldn’t have been more markedly different than the simple presentation of opening act Ke$ha.

While Rihanna stuck to being earnest, L.A.-born, Nashville-raised firebrand Ke$ha Sebert was the exact opposite: cheeky, trashy, escapist, and carefree.

Adorned in a Metallica t-shirt, gold hot pants and torn stockings and dedicated to frivolous fun, Ke$ha belted out mindless party anthems from her debut and only album Animal, highlighted by the #1 smashes “Tik-Tok” and “Your Love Is My Drug.”

Yes, her two shirtless male dancers – each sporting their own hot pants designed with the American flag – were incredibly tacky and over-the-top, but even though Ke$ha’s synthesizer-heavy dance pop seems to be tailor made for airheads, there’s enough contrived craftsmanship to suggest that she’ll be around for longer than a one-hit wonder.

By the time Rihanna rolled out the encore smash “Umbrella,” she had proven herself a worthy headliner and had taken no prisoners with her relentless sonic assault.

Still not convinced, though, that I’d want to meet her in a dark alley.