In rock bars on Toronto’s fringes, patrons live a dream in which an era of rock never lost its cachet.

John Corabi ,formerley from Motley Crue plays at The Rockpile, a bar at Toronto’s west end dedicated to celebrating the rock of yesterday.

Their hair may be greying with time, their stomachs may be a little paunchier and their bodies may be sagging in a place or two, but their passion for loud guitars and ’80s-era heavy metal remains unabated.

Last Wednesday night, these loyal maturing lieutenants were scattered among a hoi polloi of 250 admirers of various ages who braved a sweltering night at The Rockpile in Etobicoke. Their mission: to pledge their allegiance to a triple bill of rock ‘n’ roll journeymen.

In the house: Faster Pussycat, L.A. Guns and John Corabi, whose top moment in the spotlight was a brief stint as Mötley Crüe front man. 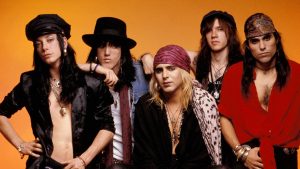 And even though the decades since grunge and thrash brought the march of the glam metal movement to a virtual standstill, there still remains a cult following of folks that refuse to let the genre die.

“I just like metal,” declares Chris Harden, 33. “And I like the diehards who keep going. They’ve been around since the ’80s and they’re still here. Taime is still here.”

The Rockpile was opened just this year by some staff from, and a former owner of, the Big Bop, the celebrated — but recently closed — Queen Street rock bar.

For 41-year-old travel agent Rafael Lopez, the show there is a good chance to relive his youth. “They bring me back to the good old days, like when Rock ‘N’ Roll Heaven was around. It was a party town.”

And not all of the music’s fans are here for nostalgic reasons.

Marianne Sorbieckyj wasn’t even conceived when Faster Pussycat and L.A. Guns released self-titled albums in 1987 and 1988.

But here she is, at age 15, her blond hair cascading over her oversized T-shirt, leather leggings and high heels, roaring with the crowd and dancing with abandon with her doting parents Jim and Belinda.

“I discovered Faster Pussycat in my parents’ CD collection and just felt in love with the aggression and the attitude,” she says, rhyming off the titles she like best from the self-professed kings of sleaze rock: “House of Pain,” “Cathouse” and “Bathroom Wall.”

“This is music that really speaks to me,” she says with a smile.

The fact they’ve been around in different configurations for a couple of decades surprises both Tracii Guns and Taime Downe.

“Faster Pussycat has been playing longer than the both Led Zeppelin and the Beatles,” muses Downe in the tour bus shared with a dozen other musicians in the three acts. “Who’d have thought?”

Adds Guns, “The longevity is a niche thing — none of us ever expected to be as big as the Beatles. We all had hoped, but the reality is you’ve got to know who you are, what they’re coming for, and be realistic, and have a good time.

Both L.A. Guns and Faster Pussycat enjoyed most of their success over a four-year period, averaging sales of 500,000 copies of their first few albums and opening arena and stadium shows for headliners like Mötley Crüe and Ozzy Osbourne.

But they never reached the headlining stature of a Guns N’ Roses (which Tracii Guns co-founded, hence the name) or a Mötley Crüe, and if there’s any sour grapes, they’re not complaining.

“The fact that any of us got record deals was kind of weird, as we were more into being part of this anti-pop metal scene,” Guns explains. Downe says bands like Faster Pussycat and L.A. Guns were “darker, dingier.”

“We wanted to bring this dark cloud of evil over the flashy pop scene,” he says. “We gave it a shot, but we just keep plugging away.

“We belong in the clubs and it’s rock ‘n’ roll — we get paid to go out there and yell and wear funny clothes. And it’s great to get out of town, see the country, make a little money and have fun.”

The folks who love this type of rock are disenchanted with today’s provocateurs.

“A lot of it is real easy to bypass,” says Harden, whose regular gig is a grocery store night manager. “I listen to it for about a week, and then I go back to the old stuff. It sounds like someone’s trying to do what’s already been done.”

For Rafael Lopez, he feels that today’s rock bands have lost their sense of fun. “Back then it was more about just partying and having fun and sex and drugs and rock ‘n’ roll, right? Today, it’s fake.”

The Rockpile isn’t the only venue to explicitly cater to these tastes: there’s also the Hardball Café in Milton and the new Rock & Roll Heaven (borrowing the old rock venue’s name) on O’Connor drive.

However, Steve Stanley, who has been operating Rock & Roll Heaven for five years, says the economy and last year’s reduction of legally acceptable blood alcohol levels for drivers — from .08 to .05 —has hurt business.

“People aren’t drinking as much and the numbers are slowing down,” says Stanley, who says he’s “hanging on.”

“It’s almost like the scene is dying again. There are so many rock bars dying — it’s sad.”

Stanley says he averages about 100 patrons whenever he hires rock acts, and, uses the crowd at the Rockpile to illustrate how much the business has changed.

“You had to put three bands on the bill to get 250 people,” says Stanley. “Back in the ’80s, you put one of those bands and you’re going to get 300 people. You really have to work a lot harder now.