Maybe Tony Bennett should think twice the next time he cancels out on Hamilton Place. 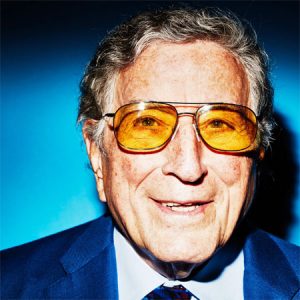 The popular Italian crooner, riding a wave of popularity that continues to crest since he received an Album Of The Year Grammy for 1994’s Tony Bennett – MTV Unplugged, staged a last-minute pull-out of his scheduled November 6 concert because newly re-elected U.S. president Bill Clinton summoned him…for dinner!

However, as Bennett recalls from his New York loft, once he arrived in Washington he never got the opportunity to peruse the White House menu.

“It was a funny situation, because it ended up being something that will never happen again in my life,” says Bennett, the first entertainer to officially open Hamilton Place back in September, 1973. (Tickets for the September 29-30 concerts were $5, $7.50, and $10.)

“I was born with a double hernia, and I was invited, not to sing but just to have dinner with him with my son at the White House. The night I went there — we canceled out of the Hamilton date as a result, and they were nice enough to let me do that — I got strangulated in the hotel room.

“Instead of going to dinner, all of a sudden I went to the infirmary, and had the President’s doctor check me out. They rushed me to the hospital, and I had an emergency operation. It was really strange.”

Bennett says he was initially concerned about the surgery because a first operation didn’t take. But he says he was in good hands.

“They did a magnificent job,” reports Bennett, 70. “It was flawless. I woke up, it was all fixed, and it couldn’t have been better.”

Also helping the healing process was good friend Donald Trump, who sent Bennett down to Florida in his private jet for a three-week all-expenses paid convalescence.

“It was one of those great adventures that will never happen again,” says Bennett. “Everything worked out for the best.”

Hamilton Place patrons should be able to decide that for themselves tomorrow night when the New York-born son of a seamstress and former singing waiter rolls out a set that includes material from his latest album On Holiday, a tribute to the late, great jazz ‘n blues vocalist Billie Holiday. 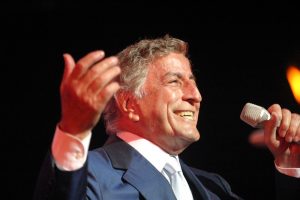 “I’ve always listened to the old masters in music,” says Bennett. “Duke Ellington and Count Basie, and all of the great musicians: Joe Jones, Lester Young. I had my training right on 52nd Street, and there were these little clubs where all these great artists played.

“Billie Holiday was their goddess. You had Art Tatum or George Shearing or Stan Getz or Erroll Garner. When Billie Holiday showed up, the overflow from the people who couldn’t get into her club would just fill up all the other little clubs. She was the goddess of all the musicians I ever met of great talent. They’re the ones who tried to play their phrase and their instruments like Billie Holiday sang.”

Bennett himself sings a studio fabricated duet with her on “God Bless The Child,” following a trend set by Hank Williams Jr. and Natalie Cole who sang with their fathers long after they were buried.

“No. I invented it,” asserts Bennett. “I did it on the Johnny Carson Show. It was a Nat (King) Cole song called ‘Nature Boy’, and I sang it just with the piano. For the very last notes, the lights would go out completely, the whole orchestra would flow in, and you’d hear this recording of Nat singing the last line of the song.

“That was the invention, and unfortunately on television, if you do something clever enough, within two weeks everybody’s doing it.”

That isn’t the only discovery for which Bennett takes credit. Don’t blame it on the bossa nova — blame it on Tony Bennett.

“I met Joao Gilberto, and (Antonio Carlos) Jobim and Astrud Gilberto right on the beach in Brazil, and I couldn’t get over it,” Bennett recalls. “They were influenced by American jazz, and then they just applied it to their Brazilian beat. They invented this beat — it’s a drum beat that has an accent on the second beat rather than the third beat. All of a sudden it no longer was the samba. It became the bossa nova. And Joao Gilberto was the interpreter, and made some beautiful records.

“When I got back from Brazil — the first thing I did was went to San Francisco and showed the disc jockeys there Joao’s records. It just took of like a blaze — like fire to kerosene, right across the whole country. Everybody started playing it right away.”

“I never got over it,” he laughs. “I don’t remember where it was, but it was a triangle, or a rectangle room. The saxes were on one side, and the trumpets and trombones were on the other side. I was at the point where they both met. It was like we were playing two different rooms at the same time.

“There was a board over some water, so we had a plank we had to walk on to get to the stage so we wouldn’t fall into the water.”

Bennett says his Basie years were fun, and is looking forward to the future, preparing to record a children’s album. He confesses though that he’s beginning to feel the years.

“At 70, it was kind of a big gulp for me,” he admits. “I had to catch my breath. I really happen to like what I do enough to say I wish I had two lifetimes to finish what I want to do.

“I felt the time clock for the first time. I feel the race is on, which I never felt before. When I was younger, I was just singing. I didn’t feel the mortality rate. So now, everyday counts. I’ve got so much more I can do. ”

Although he’s enjoying unprecedented success in touching all generations with his music, and his parallel career as a painter is simultaneously taking off, Tony Bennett says the one treasure you can never take for granted is friendship.

“Friends become the most important thing,” advises Bennett. “When you feel a failure about something, you feel down in the dumps, there’s always some wonderful friend who’ll come and be wonderful enough to lift you up and say, ‘Well, what about this, ‘ and change your whole spirit.”

“I was separated for the first time from my sons, while I was going through my first divorce. I never felt lower in my life. I was in a hotel in New York on Christmas Eve, and I’m one of those guys who is a sucker for Christmas, and the whole family getting together.

“So it’s the first time I was ever alone, away from everybody. And I heard a chorus singing, and I thought my TV was on. I walked to my hotel room door, opened it up, and there was a chorus of every denomination singing ‘On A Clear Day You Can See Forever’, and it just changed my life.

“It was Louie Bellson and Duke Ellington who sent them up to my hotel room. They were doing their Sacred concert across the street, and they heard that I was in that room by myself, and they sent the whole chorus up to me.

“I realized, wow, what great friends, to take the time out to think of someone else.”