You wouldn’t think that playing the cello for a living could be too dangerous.

Then again, you haven’t opened for Marilyn Manson. Rasputina‘s Melora Creager has endured her share of war wounds.

“I had a lump on my forehead from something that was thrown at the stage, and I got hit in the eye with a penny,” states the 30-year-old singer, songwriter and leader of the corseted cello ‘n drum quartet Rasputina that’s serving as a 20-minute intermission between warm-up act Helmet and The Reverend himself.

“But when you’re on a tour that’s the scale of this magnitude, one that promises big rewards, you assume the risks that go with it.”

It was last August when Rasputina, which includes the Kansas City-born, New York-based Creager, Vancouver cellist Julia Kent, Poland native Agnieszka Rybska and drummer Steve Moses, released their debut album Thanks For The Ether  and set about redefining rock ‘n roll parameters. Previously available as an import, Thanks For The Ether  will be released by Sony Music Canada on May 20.

Some of this quirkiness rises to the surface when Creager points out a common trait among all three acts on the Marilyn Manson tour.

“All of us incorporate the words “wishing well” into one of our songs,” she deadpans.

But this eagerness to transplant the old world with the new explains the cellists’ stage wardrobe of antique corsets.

“It plays up the juxtaposition of our instruments into the rock world,” says Creager.

Creager’s previous claims to fame included a stint with Ultra Vivid Scene, and she was the cellist that accompanied Nirvana to Europe on what would be Kurt Cobain’s final pre-suicide concert appearances.

“Everyone on that tour was great, young and intelligent,” recalls Creager. “But there was a kind of cloud hanging over Kurt. It was very sad. I think he was the authentic tortured artist.” 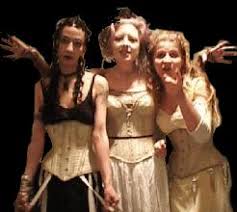 For the Manson tour, Creager says Rasputina has geared its performance to account for a restless audience.

“Knowing who this audience is here to see, we don’t play any of our soft songs,” she says. “It’s a challenge, but when we see the crowd surfing to our music, it’s a beautiful thing.”

But being part of the Manson entourage even poses problems outside the stage vicinity. Creager says she’s had to sweet-talk her way into a hotel room on more than one occasion.

“We do often have to swear to hotels that we’re not in the band,” says Creager, “Hotels don’t like to let them in because of who they are.”