The first half-hour of a 60-minute conversation with Status Quo‘s co-founding guitarist produces a barrage of opinions on everything from The Royal Family to squiring eight children: all before a reporter has an opportunity to pose a single question. 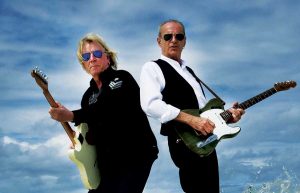 “Ah, you’ve let me wander,” chides the 47-year-old Rossi over the phone from his London home at the 20 minute mark of his monologue. “I should warn you, I love to talk! Now, about rehearsing! I hate it! It’s like dragging a Morris Minor automobile up a hill tied to your testicles!”

Another 10 minutes pass before Rossi comes up for air, time enough to formulate a theory as to how Status Quo has bucked trends and confounded critics for the better part of 30 years.

After all, the five-man, three-chord rock outfit is virtually unknown this side of the Atlantic — tomorrow (Friday) night’s concert at The Warehouse marks their first Toronto appearance in over 20 years — yet they’ve managed to bulldoze themselves into U.K. pop consciousness as paragons of rock ‘n roll durability. Three decades of Status Quo on the normally fickle British pop charts has inflicted 30 albums, 44 hit singles, and — if an accompanying hype sheet isn’t stretching the truth — over 110 million records sold.

Except for a brief split in 1984, Status Quo has been as unstoppable as the Energizer Rabbit and just as resourceful. Since Francis Rossi and fellow guitarist Rick Parfitt joined forces at Butlin’s Holiday Camp in Minehead just outside London in 1967, the duo has survived a number of line-up changes and made more than 100 appearances on the influential British Broadcasting Corporation (BBC) TV program Top Of The Pops.

Their history-making adventures include opening Live Aid, rock music’s gigantic 1985 African hunger benefit with their thundering anthem “Rockin’ All Over The World;” and entering the Guinness World Book Of Records with Rock ‘Til You Drop, their successful attempt to perform in four major U.K. cities within 11 hours.

They’ve filled Wembley Stadium numerous times, performed 14 straight sell-outs at Moscow’s Olympic Stadium to over 300,000 people, and received both the Silver Clef Award and a World Music Award for their outstanding contributions for the British music industry. If that weren’t enough, both Rossi and Parfitt have been immortalized in wax at Madame Tussaud’s and replicated in fine china by Royal Doulton.

Even with all these honors, Francis Rossi is at a loss to explain Status Quo’s lingering longevity.

“We’ve been doing the same song for 30 years!,” jests Rossi, “I guess it was a lot of serious determination and sheer bloody luck!”

Rossi, who will be joined by Parfitt, keyboardist Andy Bown and ex-Climax Blues Band rhythm section Jeff Rich and John “Rhino” Edwards at The Warehouse tomorrow, is also unsure as to why Status Quo never capitalized on the North American impact of their 1968 Top 20 classic “Pictures Of Matchstick Men.”

“We had a really bad experience touring the United States the first time,” offers Rossi. “We didn’t want to come back. We were cowards. We turned our tails and ran, deciding to concentrate instead on our own backyard.

“As for not appearing in Canada, I guess it was very rude of us but we lumped you together with the Americans — the same thing that happened with the New Zealanders and Australians.”

Rossi says the band’s extravagant lifestyle certainly made him wish things had worked out differently.

Status Quo may be in the running as Britain’s foremost party animals, but the band reached a serious roadblock in 1996 when BBC’s Radio One refused to play their version of The Beach Boys‘ “Fun Fun Fun.”

The band sued, lost to the tune of 250,000£, but Rossi says the sting of disrespect hurts more deeply than the financial setback.

“We’d been asked to do so many things for the BBC.,” says Rossi. “They wanted us to play at their 125th celebration at their behest for no money, and other charity events, and we did them. Now the BBC ignore us.

“We don’t like the idea of being pushed out, but unless we have the exposure to use as an outlet to our direct fans, we have no way of expanding our audience.”

Status Quo isn’t the only band stranded in this abandoned boat.

After three decades of building steady fan bases and lining record company pockets with gold and platinum albums, they’ve found themselves relegated as the nostalgia bands of the ’90s as they try to tap into a small, but loyal vein of aging, hardcore fans.

Overthrown by the initial tidal wave of the Seattle grunge invasion that swept Nirvana, Faith No More, Soundgarden  and Pearl Jam into the spotlight, former stadium-filling bands such as Iron Maiden, Cinderella and ex- Black Sabbath frontman Ronnie James Dio, booked at the Warehouse April 22, are lucky to retain label deals and pack intimate venues.

Although short, flat hair, lumberjack jackets, jeans, piercing and tattoos have largely replaced the leather ‘n spandex, poodle-haired perm audience of yesteryear, is there anywhere in Toronto that offers a residue reminder of The Rock ‘N Roll Heaven, El Mocambo, Gasworks heyday of the ’80s?

“There are no clubs out there doing anything on a regular basis. The Guvernment is a very successful dance club, and the live entertainment becomes the icing on the cake. Rock ‘n Roll Heaven was the exception to the rule, because it was a club that was part of the scene.

“Speaking for myself, it’s a great hobby. But I do a lot of new bands like I Mother Earth, Big Sugar and Great BIg Sea, because I don’t want to be pinned to the dinosaur stuff.”

“One of the things I find offensive about the music business is this constant thing with age,” sighs Brown. “Any other business, the longer you’re in it, the better you are. You’re considered a better lawyer at 40 then you were at 25. The same should apply to musicianship. Hopefully, as the years go on you get better and better.”

“We do feel we’re going somewhere,” he says. “The band is constantly improving.

“But I guess my only real ambition is to keep rockin’ and livin’ until I’m 85 years old. I always thought I’d be dead at 40.”

Brown blames changing musical tastes and a shrinking economy for classic rock’s malady, at least one person feels the genre to be in the midst of a resurgence.

“We feel there are tens of millions of people 25 and over who aren’t ready to age gracefully and fall asleep buying classical or Barry Manilow records.” says Lipsky, 42. ” There’s an adult market who still is interested in buying records of bands they grew up with — Yes, Deep Purple, Styx, and other bands with proven history. CMC specializes in marketing basic mainstream bands, and we address a market we feel is being ignored by most major labels.”

Lipsky claims that in CMC International’s four short years as a label, they’ve gone from selling $200,000 U.S. worth of albums in Year One to what he conservatively estimates will be $15 million — especially bolstered by the additional distribution channels of BMG Music, who bought a 50% interest of CMC six months ago.

In what is becoming an increasingly fragmented market of varied tastes and interests, Lipsky feels the fusion of new music and familiarity that his acts offer, rock radio’s recent acceptance of new Journey and Deep Purple material, and an upcoming summer concert season of nostalgic group reunions such as Styx and Supertramp might combine to trigger a comeback.

“We’re one commercial hit away from doing a good, solid business,” says Lipsky.