Move over James Brown: there’s a new contender for the heavyweight title of “Hardest Working Man In Show business,” and he’s from Dublin.

At 56, having guided The Chieftains for 32 years and as many albums, Paddy Moloney shows no signs of slowing down. This month alone, The Chieftains are in the midst of a 21-date, coast-to-coast U.S. tour, excluding additional appearances on David Letterman, Late Nite With Conan O’ Brien (March 15); The Late, Late Show With Tom Snyder (March 16); The Today Show and ABC In Concert (both March 17). 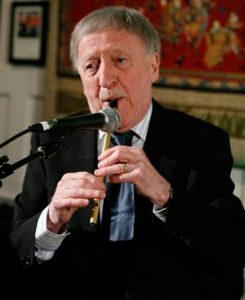 In between dates, Moloney is conducting interviews for the band’s just-released album, The Long Black Veil; writing a symphony; and handling requests from everyone from country bluegrass sensation Ricky Skaggs to film companies for personal appearance.

Then there’s the album of Galician music, featuring special guests Los Lobos and Jerry Garcia, that the sextet is just a whisker away from completing.

“I’ve been pleading with the boys for just one more day in the studio,” said Moloney last week in the Toronto offices of his record company, a tin whistle peeking from under his suit jacket.

“I think I can finish it off in just one afternoon. They said, ‘No! No! No! We don’t want to do anymore.’ There’s always something going on.”

Moloney’s persistence and productivity finally seem to be paying off. The Long Black Veil, matching traditional Irish and Celtic melodies with rock superstars Sting, Rolling Stones, Van Morrison, Sinead O’ Connor and others, is gold in the U.S. in just four weeks, selling over 500,000 copies and firmly lodging itself in the top 30. In Canada, the album has moved over 35,000 units in the same time period.

Moloney said he just had one goal in mind when recruiting stars such as Mark Knopfler, Marianne Faithfull and Tom Jones.

“I was trying to get the atmosphere of a party going on all the tracks,” he says.

Moloney concedes the best session was the Stones’ participation on “The Rocky Road To Dublin,” which initially worried him when the band showed up to a recording session five hours late.

Moloney says he first partied with The Stones at the mansion of the late Brian Jones.

“I remember in 1967 they were playing Chieftains albums at these parties, which I thought was really strange,” recalls Moloney, ” And I remember in 1966, Marianne Faithfull and Mick Jagger were — how should we say, stepping out — and both came to this concert we gave in London.”

For the “Rocky Road To Dublin” session, Moloney recalled his policy of no smoking in the studio fell on deaf ears.

“Keith (Richards), I asked him not to smoke because I have allergies,” remembered Moloney.”So at first they’d run out of the studio, smoke outside, and come back in again. At two a.m., after they had played ‘Satisfaction’ in the middle of the song, Keith had a cigarette in one hand, his arm around me, and said, ‘You know Paddy, at the end of the day, music is music and musicians are musicians. That’s what music is all about.’ Of course, I had given up on the smoking policy by then.”

Moloney said the session for “The Rocky Road Of Dublin” eventually ended at 4:00 a.m. at a local pub.

Recognized as traditional Irish music’s most accomplished diplomats, the team of uilleann piper and whistler Moloney; fiddlers Martin Fay and Sean Keane; bohdran player Kevin Conneff; flautist Matt Malloy and harpist Derek Bell has entertained The Pope and played on top of The Great Wall Of China during their illustrious career.

On July 13, The Chieftains head to Quebec near Gross Ile to debut a symphony that Moloney is writing about Black ’47, the great Irish potato famine.

Moloney says he’ll be enlisting some Canadian talent for the debut, including Colin James, The Rankin Family, fiddler Ashley MacIsaac and The Montreal Jubilation Choir. Irish actor Richard Harris will provide the narration.

“I have 15 minutes written for a 50-minute symphony,” says Moloney. “I’m keeping my fingers crossed I have it finished by then.”