How full is Shania Twain‘s calendar these days?

It seems that every time country music’s current chart queen turns around, another awards show beckons with a fistful of nominations and a live appearance offer. 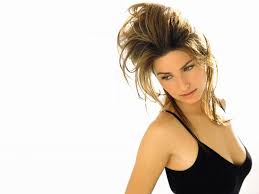 Just last week, the Academy Of Country Music announced the 30-year-old Timmins native was a candidate in four categories — including Album Of The Year for her gazillion-selling The Woman In Me — for its upcoming awards show, to be presented in Nashville on April 24.

When she attends this Sunday’s Juno Awards at Copps compete for seven Junos and perform “If You’re Not In It For Love (I’m Outta Here),” it’ll mark the end of a whirlwind TV tour that’s included airtime on Late Night With David Letterman, the Grammy Awards (where she won Best Country Album for The Woman In Me), and The Blockbuster Video Awards.

So what’s Shania’s take on all this head-spinning attention?

“It’s all a blur,” chirps a slightly groggy Twain during an early morning phone interview from an office near her upstate New York home.

“It feels great. It’s keeping me busier than ever, and it’s just going tremendously well. This has been my biggest year.”

The endless media requests and public appearance demands do have one drawback. The former Deerhurst revue singer was hoping to be immersed in the studio working on the follow-up to The Woman In Me at this point and time.

“In a happy way, it’s definitely interfering with my writing,” says Twain, whose debutante looks and frequently bared midriff have contributed a sexier, glamourous image to country music.

“It’s keeping me busier than I thought. I kind of expected things to be as big as they were gonna get with this album in ’95, not necessarily bigger in ’96. It’s been full of great surprises.”

Not the least of those surprises has been the seemingly unstoppable success of The Woman In Me. Co-written and produced by Twain’s husband, Robert John “Mutt” Lange — the architect behind some of the most successful rock albums by AC/DC, The Cars, Def Leppard, Bryan Adams and Michael Bolton — The Woman In Me is currently enjoying its 19th week at #1 on Billboard’s Country Albums retail chart, outselling such Nashville mainstays as Garth Brooks, Reba McEntire and Alan Jackson.

Besides netting Twain Juno nominations for Entertainer Of The Year, Female Vocalist, Country Female Vocalist, Best Selling Album, Album Of The Year, Songwriter of The Year and Single Of The Year (for Any Man Of Mine), the album should eclipse Diamond status signifying sales of one million copies in Canada by the time the final award is presented Sunday night.

The Woman In Me has also surpassed the 6 million sales mark in the U.S., making it the biggest selling album ever by a female country artist. Fueling this record-breaking year is an endless pit of hit singles. So far, The Woman In Me has racked up two Billboard #1 hits with perky “Any Man Of Mine” and the rocking “If You’re Not In It For Love (I’m Outta Here),” and a top 5 with the bright two-step “Whose Bed Have Your Boots Been Under?” The sensuous ballad “The Woman In Me (Needs The Man In You)” hit the top 15, while the upbeat “You Win My Love” is currently racing up the charts. 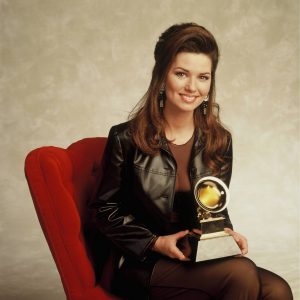 “I’d never thought we’d run out of time before we ran out of singles,” she laughs, adding that she’s aiming for an early 1997 release date for the new album…if she ever gets in the studio.

“Starting in April, things will start to change timing wise,” vows Twain, who will collaborate again with Lange, currently wrapping up his work on Bryan Adams’ new album, 18 Til I Die.

“I’m blocking out writing time that is not going to be disturbed. We have to get a new album out!”

In the meantime, the five-time CCMA award winner is looking forward to the Junos.

“It’s important because it’s so close to home,” says Twain, who has exclusively performed in Hamilton at awards shows.

“I’ve got so many nominations, that as well makes it so exciting.”

Although she acknowledges a friendly rivalry between herself and Ottawa sensation Alanis Morissette, whose Jagged Little Pill vies with The Woman In Me in six Juno categories, Twain wishes her peer the best.

“I’m not really that competitive by nature myself,” says Twain. “I remember when Alanis came out a few years ago. It was a totally different kind of music. I liked her then, and I thought, I hope I get to hear more from this person.

“Lo and behold she comes back and knocks everybody over the head with this great stuff. So I’m excited for her, and I’m excited she’s doing so great as a Canadian everywhere.”

Waxing jubilantly over the astonishing success Canadians — especially Canadian women — have enjoyed internationally this past year, Twain downplays citizenship as a prerequisite for prosperity.

“I think it’s fantastic, especially with our small population.” says Twain. “Compared with the U.S., it’s exceptional. From my end, there’s a bit of a misconception about being accepted. I don’t think Canadians have any less of a chance. I never ever really thought that. I think the U.S and everywhere else in the world is open to music that they like.

“Maybe what does happen is a lot of young Canadians get extremely inspired by what’s happening, and it boosts their own confidence. I don’t think that because we’re Canadian, we have any less of a chance.”