Not his joining up as guitarist with California’s The Red Hot Chili Peppers — arguably the hottest funk rock band on the planet, mind you — but drummer Chad Smith‘s snapped wrist that resulted in the postponement of the group’s mid-Autumn North American tour.

“I tell you, when Chad broke his wrist, (bassist) Flea and I were ecstatic,” the 28-year-old Navarro exclaims over the phone from his L.A. home.

“Granted, we felt bad for the guy. He’s our friend, and he was in pain. But we had just done two months in Europe, and we were both so exhausted and fried and so not looking forward to getting back on the road again.” 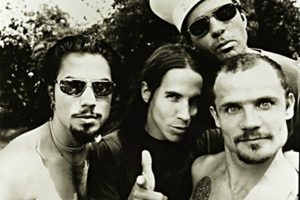 Navarro, who hooked up with Smith, Flea and singer Anthony Kiedis in September 1993 to record their latest album, One Hot Minute, said he initially thought Smith was pulling his leg when the stick handler phoned him from the hospital.

“He called me a day or two before we were scheduled to play, and said, ‘Dude, you’re not going to believe this. I broke my wrist.’ He knew I didn’t want to go on tour, and I thought he was f—- with me. Then I heard the intercoms and the crowd noise in the background, and I realized he was telling the truth. I was ecstatic.”

The former guitarist with Jane’s Addiction says he spent his time off “hanging around with my girlfriend and riding motorcycles.”

“The good thing about it is that he healed up great, and we had a long enough break that I couldn’t wait to get out on the road,” says Navarro, who made his onstage debut with the band at last year’s Woodstock Festival.

“I’d much rather be excited about going out on tour than going out and dreading it.”

Navarro compares the situation to reuniting with a lover.

Contributing darker, richer textures to the Chili Peppers’ slabs of hyper funk rock, the California-born guitarist says his honeymooning stage with the band is over.

“I finished that (process) a long time ago,” says Navarro. “After a certain amount of disagreement with anybody, you finally are comfortable with them.

“Even with a girl that you’re dating, as soon as you have two or three arguments with them, anything goes. Once you’ve had emotional, spiritual and physical experience with somebody, you’re pretty comfortable with it.”

“I hate to keep going back to these relationship analogies, but I believe that every band situation has its own personality. It’s like getting in touch with a new entity. I liken bands to singular beings. There are so many differences that basically the only similarity is that music is being played.” 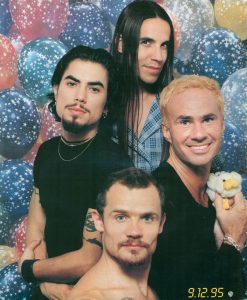 Navarro said his only difficulty was being expected to create music with new bandmates without getting to know them.

“An awkward situation was the fact that I joined this band and we immediately went to work on a record, whereas with Jane’s Addiction, I’d been in the band for X amount of years,” explains Navarro.

“With Jane’s we accumulated a certain amount of material and then we went in the studio. It was more natural.

“From a technical standpoint, the Chili Peppers is a lot more rhythmically and funk oriented than I was used to playing with, but it was just a matter of getting to know the person I was dealing with.”

Surprisingly, Navarro had to be asked twice to join The Red Hot Chili Peppers, the first coming on the heels of his split with Jane’s Addiction in ’91.

“I said no the first time,” he reveals. “Because they wanted me to do Lollapalooza with them, which basically meant that I would have to learn all their old songs and just be a guy playing their old songs. What’s fun about that? I just did the last Lollapalooza (with Jane’s Addiction). ”

Still smarting from a bitter breakup, Navarro poured himself into a one-off recording project with former Jane’s bassist Eric Avery called Deconstruction on American Recordings as he pondered his future.

“I’m telling you, at the end of the Jane’s Addiction days, they could have had $12 million apiece on the table, and none of us would have taken it. It wasn’t about the money. We just had our own differences. I spend enough time walking through life and shit that comes to me that makes me sad and miserable. There’s no amount of money that I’m going to say, okay, I’m going to take more misery.”

He also turned down a personal invitation from Axl Rose, who helped him turf a drug habit, to join Guns ‘N’ Roses.

“Axl’s a good friend of mine,” says Navarro. “He was instrumental in getting me clean. But I just wasn’t ready for something like that right then. I didn’t want to have a week of sobriety under my belt, and then go on tour with Guns ‘N’ Roses. It didn’t seem like a serene move.”

When the Chili Peppers called a second time, however, Navarro was ready.

“Chad and Flea are incredible musicians, and I’ve always wanted to play with those guys,” he says. “I wanted to go out on tour again, and it was also an opportunity to have some input creatively, where I wasn’t able to have that before. Those guys are incredibly talented, and I couldn’t let the opportunity to create with them go by.”

Needless to say, Navarro is pleased with his decision.