As founder of Scottish rock group The Waterboys, singer and songwriter Mike Scott gained worldly insight and experience during their 12 year, six-album existence.

So it’s surprising when the 37-year-old Scott, wearing a bright red shirt and matching red cap, divulges an unlikely source of inspiration for Bring ‘Em All In, his first post-Waterboys solo album: Dr. Seuss.

“I was renting an apartment on Hudson Street in Manhattan a few years ago,” recalls Scott, in Toronto last week for a day of promotion to push the album and an upcoming solo concert.

“Across the road was a children’s bookshop called Books Of Wonder, and I had always looked enviously at Dr. Seuss books when I was a child. I never got any of them as presents or read any of them, so I decided to catch up.

“The first one I read was called All The Places You Go, and I so wished that I read that as a child. I could have really done with knowing what was in that book. The line that really got me was, ‘When things are happening, just go along and pretty soon , you’ll be happening too.'”

Scott pauses for a moment before continuing in his soft Scottish burr.

“I wish someone had told me that when I was a child. I always thought things were happening somewhere else.”

The man whose ragged, passionate voice fueled such immortal songs as “The Whole Of The Moon” and “Fisherman’s Blues” says he found most of the content in Dr. Seuss’ books to be sage advice.

“Another great book was about this guy who tries to get away from his troubles, and he finds it doesn’t work,” says Scott, his voice animated with excitement.

“So he goes back to face them, and says, ‘From now on, my troubles are going to have troubles with me.’

“It was a good lesson. I’m sure that’s in the song ‘Dublin, City Full Of Ghosts.'”

“City Full Of Ghosts (Dublin)” is one of a dozen songs from Bring ‘Em All In, a warm, intimate and acoustic album that finds Mike Scott at a philosophical crossroads, one where he has found peace within .

“I definitely found the thing that I was looking for in myself,” explains Scott. “I found my center.

“I guess I was always looking for what I would have called spiritual fulfillment, without really knowing what that would feel like. Over the years I’ve had certain moments of understanding, a revelation here and there — isolated moments that give me a taste of what life can feel like. I was always searching for bringing that more and more into my life. And there were periods when I’d forget about that, and go through different byways and learn different things, but I’d always come back to the center. Looking for God, you could call it. Eventually I did find it. I hit paydirt.” 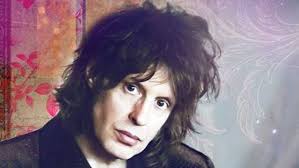 He credits Findhorn, a Scottish holistic commune where he toiled in the gardens and the kitchens while writing most of the material for Bring ‘Em All In, with helping him reach a new level of humility.

“Everybody who goes there has to work,” said Scott. “I went there under a program. They do healing workshops, with medication. It’s all new age, and part of every program involves working. I worked in the kitchens.”

Scott said that his time at Findhorn was the first physical labor he had endured since he was 19.

“Some of these big CEOS go on retreats where they play on a football team, or they do some team activity to keep them from getting too egotistic. It had that same effect on me. It was a really good leveler. I worked in the kitchens, and I wasn’t the boss. I’m used to being the boss. In the band, I was always the boss. So I was the most minor guy there. It was a different experience, and it shook up my sense of who I am in a really good, creative way. It was great. I learned a lot.”

Scott said he also had some other motives for joining the commune.

“I wanted to bring gratitude into my life, just to be grateful for the little things, and unconditional love — loving other people regardless of whether I’m getting something from them, and giving myself the same kind of energy. Those two things opened something in me, and I really touched my center.”

Now based in London, Scott says he’ll be heading into the studio in April to record a new album following a short Moroccan vacation.

“I’ve written lots of songs and they’re less autobiographical,” says Scott. “There are no diary type songs in my new work. I start recording in April, and I’ll be using a full complement of musicians. The feel of the songs is more musically harder edged — more going in the direction of ‘Building The City Of Light.'”