NEED TO KNOW: METALLICA, with Corrosion Of Conformity at Copps Coliseum on Tuesday, February 25. 7:00 p.m. Remaining tickets are $32.50 and available at the Copps Coliseum and Hamilton Place box offices, or by calling TicketMaster at 645-5000.

During this Twilight Zone moment, Metallica accepted the award for Favorite Hard Rock Group from none other than a bare-chested, leather-vested, pectoral-flexing Pat Boone.

“It was a slightly surreal feeling,” admits James Hetfield, the San Francisco metal band’s 33-year-old inferno-lunged singer. “I couldn’t tell if he was doing it out of respect or just fu—- with us. But hey, heavy metal can be made fun of once in a while.”

The Boone-Metallica accord didn’t stop with the awards presentation. The 62-year-old milquetoast singer, whose previous trademarks were white buck shoes and puritan pop songs, has recorded his own version of Metallica’s “Enter Sandman” for his new album In A Metal Mood: No More Mr. Nice Guy. Hetfield says Boone played it for him and fellow bandmates Kirk Hammett, Jason Newsted and Lars Ulrich during the AMA’s afternoon sound check, and…? 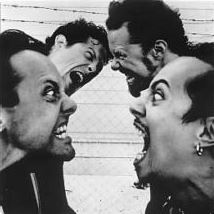 “We were in stitches, but we were also blown away,” says Hetfield over the phone from Chicago.

“It’s awesome! I heard he was doing a heavy metal album a few months ago and thought, ‘It’s going to be bad.’ But he basically took the song and made a big band version out of it. ‘Enter Sandman’! Big Band! He did it proper.”

“Enter Sandman” is not the first Metallica song to be given a makeover. Last Fall, a Finnish cello quartet named Apocolyptica released their own album of Metallica covers, and joined the band as an opening act for the Scandinavian leg of the Load tour.

“It was so strange to see these four blonde Finnish guys with long hair sawing away on their cellos,” Hetfield recalls. “They did ‘Fade Into Black’ and I thought they were going to saw their cellos in half!”

Hetfield considers any unorthodox treatment of a Metallica song to be a compliment to his skills as a writer, and treasures any opportunity to stretch the boundaries of a tune.

“I think with MTV’s Unplugged that a lot of people forget that it’s an opportunity to take the song and play it totally differently,” he says. “There are some people unplug their instruments and play the song the exact same way. What’s the point?”

In his own right, Hetfield says Metallica have been experimenting with techniques usually considered outside the realm of metal. 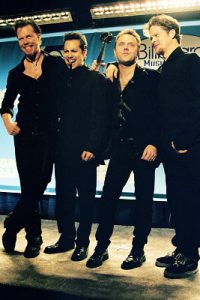 “We’ve been toying with this idea of working with an orchestra,” he says. “And I’ve done ‘Mama Said’ by myself on stage with just an acoustic guitar on Swedish TV, which was scary.

“It’s not like the other guys are there to cover your mistakes,” he laughs. “Plus you have all these cameras up your ass. It was another hurdle.”

Hurdles have been something Metallica has been clearing over the 15-years since Hetfield and drummer Ulrich struck up a partnership in Orange County, California. As albums such as Kill ‘Em All, Master Of Puppets and Ride The Lightning placed them at the vanguard of the hardcore thrash metal scene, the band built a loyal fan base through excessive amounts of touring.

Radio didn’t buckle until the single “One” hit the airwaves from the band’s fourth epic, …And Justice For All, and the MTV mentality of filming videos to support songs was implemented only with “Enter Sandman,” a driving ballad about nightmares that eventually did the unthinkable and reached #1 on the pop charts.

In its wake, Metallica has sold in excess of 25 million albums, and its self-titled “Black” album is still on the charts five years after its initial release, nine-million-units strong and counting.

Are there any frontiers left for Metallica to conquer?

“If there is, we’ll find them,” Hetfield replys with a chuckle. “The cool thing is that we don’t do any of this on purpose. We go wherever our music takes us. We experiment because we get pretty bored. It’s a little too safe to write the same album over and over again, which some bands do. But we learned a long time ago that writing for the fans doesn’t work. I’m a firm believer that you can’t please anyone but yourself.”

The only thing of which Hetfield is certain is that the realm of dark troubled subject matter that has inspired such songs as “Thorn Within” and “Creeping Death” will continue to be tapped for years to come.

“There are always more problems that arise,” he explains. “When you first start out you’re angry at the world, and as you grow older you become upset at different things. Some of them you’ve created yourself, some come from your childhood, and some come from your lifestyle, which is always extreme. It takes its toll. There are tons of mental things to continue to write about.”

Hetfield also claims that the band’s expanding bank account is pumped directly back into its stage show. For their upcoming Copps concert, there’s a dual revolving stage set up with what Hetfield calls “lots of explosions.”

“The money allows us to tour how we want,” he explains. “Our stage show becomes a sharpened weapon, an investment. Our live show is a big part of Metallica. It’s what we do. How many albums have we released over 15 years? Six!”

“We’re really proud of what we’ve done this time out. There are tons of front row seats, and it allows us to feed off our fans. There’s a lot happening — blood, sweat, and beers!”