THE RETURN OF REDNECK COUNTRY

Country music is getting rowdy again.

As newcomers Gretchen Wilson and Big & Rich suddenly race up the charts with attitude-brandishing anthems like “Redneck Woman” and “Save A Horse (Ride A Cowboy)” and outspoken veterans Toby Keith and Montgomery Gentry watch their fan base increase by leaps and bounds, country audiences have returned to embracing the genre’s ornery streak.

“There’s definitely been a surge in the sort of wild side of country music in the past 18 months,” observes Neil Pond, vice-president and editorial director of Country Weekly, the nation’s top selling country music magazine. 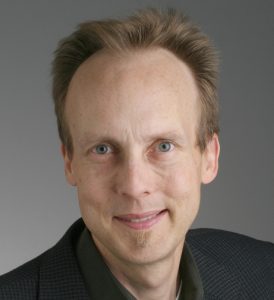 “Whether it’s a full-blown trend will remain to be seen, but it’s certainly having an impact that’s being heard and felt in country music.”

More importantly, that interest is translating into sales:  Earlier this summer, Pocahontas, Illinois native Gretchen Wilson topped the country charts for six weeks with “Redneck Woman” and took less than three months for her debut album Here For The Party to move more than 2 million copies.

The Nashville-based duo of Big Kenny and John Rich also hit the Top 10 with its humorously provocative “Save A Horse (Ride A Cowboy),” while watching its own debut Horse Of A Different Color sail past the platinum plateau within a month, averaging sales of 70,000 copies a week.

So why are audiences suddenly embracing country’s rebel yell?

“Before this started happening, country had gotten to a point where it was so safe, so politically correct, so homogenized, so bland, that it had to do something,” comments Country Weekly’s Pond. “The seesaw had nowhere to go but start tilting back in another direction.”

Gretchen Wilson, the former bartender who seems to have started the current avalanche with “Redneck Woman,” said she experienced the frustration of dealing with conservative Music Row tunesmiths firsthand. 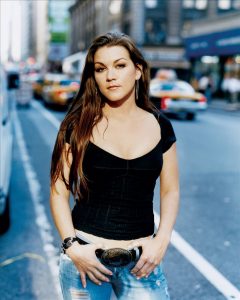 “I often wrote with writers where I had to struggle to use the word ‘ain’t’ because it’s not proper English,” recalled Wilson, whose Here For The Party is abundant with slice-of-life serenades reflecting her small-town upbringing.

“And I’m sitting there looking at them going, ‘Who cares?’ A lot of the people who listen to country music say ‘ain’t.’ If that’s the way I talk, why wouldn’t I sing it that way?

“I think a lot of the songwriting coming out of Nashville was just a little too proper and just doesn’t sound like something people listen to where I come from. They listen to some of the songs and say, ‘Hey, that’s a nice song and everything, but I don’t get it. It’s not my life.”

“I think ‘Redneck Woman,’ just really hit home with down-home, regular people who hadn’t been spoken to in awhile about ordinary, every day life things,” she explains.

“A lot of the audiences that I’m reaching are stay-at-home Moms and Dads, or they’re two-income families that are working three jobs between rushing around, picking up the kids, taking them to school and bringing them home.

“What I sing about is just every day life stuff that they can really relate to.”

“I’ve had to tell a lot of people, ‘It’s not just a song about being a redneck – it’s a way of life,” says Wilson.  “Don’t worry about whether you’re driving the fanciest car or living in the biggest house or wearing the finest diamonds.

“I think a lot of people where I grew up and where I come from are just happy with what they’ve got, and they know how to live life. The important things to them are love and family and friends and good times and making the best of every day with what you have. It’s not worrying about what people think of what you don’t have.”

Big Kenny, who hooked up with ex-Lonestar member John Rich after both had lost their solo deals, says country fans are more tolerant and liberal in their choices than some Music Row stalwarts might suspect. 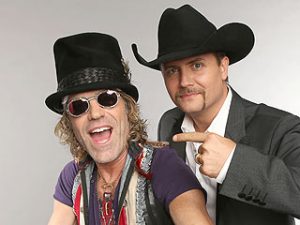 “It’s very evident that our country audience likes to have a good time and that they are very open to all sorts of music, but until it’s put in front of people, they can’t decide whether they like it or not,” says the Big & Rich singer, whose on-stage entourage includes a rapping cowboy.

“Being the proponents of music without prejudice, we just go out there and play what we’re feeling, and it seems like the audiences are just wanting to grab it and get galactic.”

This isn’t the first time country has gone wild.

In the ‘70s, the Outlaw movement flaunted the independence of Willie Nelson, Waylon Jennings, Kris Kristofferson and others, cementing their reputations as rebels bucking the system. In the ‘80s, Hank Williams Jr. enjoyed an enviable streak of success filling his concerts with raunchy and classic crowd-pleasers like “Whiskey Bent and Hell Bound” and “All My Rowdy Friends Are Coming Over Tonight.”

More recently fare like Toby Keith’s “How Do You Like Me Now?” and “Courtesy Of The Red, White And Blue (The Angry American)”has increased the Oklahoman’s stature as an astute songwriter who often nails public opinion.

Montgomery Gentry’s Eddie Montgomery says reading the public’s pulse is crucial to the success of his duo and other historic renegades. 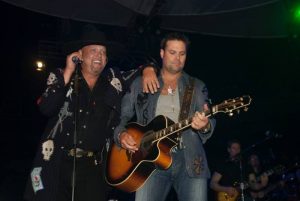 “I think all our rowdy guys in the past – our heroes like Charlie Daniels and Hank Jr. and Skynyrd and Merle Haggard and Waylon & Willie, they sing songs about everyday life – the good, the bad, the ugly and the party on the weekend,” says Montgomery on behalf of partner Troy Gentry. “People can relate to that – whether you’re going to school or out here working 80 hours a week.”

It’s even extended to fashion: Montgomery has been alternating his wardrobe between cowboy hats and overcoats to Kufi Caps and slogan-filled t-shirts.

“I like going out and saying, ‘Hey, let’s wake up” so we don’t get stereotyped so damn much,” says the “Our Town” singer. “Because in country music, there are still people who like to stereotype us. We like to rock with the best of them.

“Of course, the original Man In Black always did something for me in the way he sang and the way he wore – the way he carried himself. That’s one thing we like about our heroes, and we want to make sure we do the same thing and never get away from who we really are.”

Country Weekly’s Neil Pond says Wilson and Big & Rich may be getting most of the attention, but other truth-baring artists are on the horizon.

“If you look around you’ll find an artist like Trent Willmon who sings, ‘I’m a beer man. I’m not a refined cultural white-collar guy. This is who I am’ and you hear the other things that he’s about as you listen to the song.

“If you really started looking at the Top 40 in country music, you’d see this is all leading somewhere.”

Be the first to comment on "The Return Of Redneck Country"