Nineteen years ago, the New York-based singer-and-songwriter was in a state of panic when he vainly searched for inspiration to create the tunes that would eventually become his third album.

The root of his anguish: writer’s block.

“My confidence was shot and I felt kind of beset by circumstances beyond my control,” recalls Crenshaw of the agonizing days, weeks and months before the songs for Downtown began to flow. 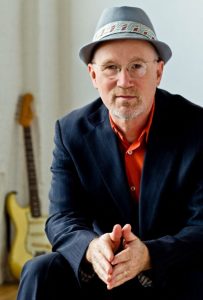 “I had so many other things on my mind and carried so much anxiety that I just couldn’t write anything.

It’s a songwriter’s worst nightmare – the ideas cease to flow and the well dries up to the point where one feels they may have written their last melody or lyric.

“That blank sheet of paper looks pretty blank when you’re going through a phase like that,” Crenshaw admits — and he’s not the only recording artist to experience the misery.

Goo Goo Doll’s Johnny Rzeznik, Nine Inch Nails’ Trent Reznor, David Bowie, Paul Simon and Mary Chapin Carpenter are some of the many who have been crippled by writer’s block at some point in their careers.

Many theories have been forwarded concerning the causes of writer’s block, ranging from financial stress and personal depression to chemical imbalance and even frontal lobe disorder, but the remedies are as personal as they are wide-ranging.

Some like to talk about it — and as veteran songwriter Loudon Wainwright III admits — some don’t.

“In passing I talk about it with friends who are songwriters, but it’s a bit like impotence – you don’t really talk about how much Viagra you’re using — you kind of keep it to yourself,” notes Wainwright.

On one of his earlier works, Album III, Wainwright found a creative way to deal with his dilemma.

“I was so panicked I wrote a song about it called ‘Muse Blues,'” he laughs. “At that time I’d been a songwriter for a couple of years and when I made my first album, I had enough songs for two. So when I got to my third album all of a sudden it was thin gruel. I was clearly concerned because I wrote this song about not being able to write songs — specifically about this idea of the muse as a girlfriend who stands you up.”

“I’ve watched them drive themselves crazy and drink themselves sick about not writing songs,” he says. “When I was living in London a couple of years ago, somebody in the media wanted to talk to musicians and writers who were blocked because of depression and would be willing to take Prozac or some anti-depressant in the hope of loosening the flow.

“I passed on that project. I don’t want to completely eradicate my depression chemically. I use it in my songs.”

Sometimes the block is willfully imposed.  When Grammy winning country singer Kathy Mattea first relocated to Nashville from West Virginia early in her career she had different intentions.

“I came to Nashville to be a writer, but I’m not one of those people who was driven to write, ” she states. “I was driven to sing. I realized my talent wasn’t as raw as a singer as it was as a writer.” 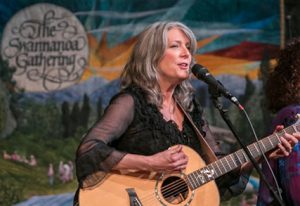 After signing with Mercury Records and watching her career explode with the chart topping “Eighteen Wheels And A Dozen Roses” and “Goin’ Gone,” Mattea didn’t have the energy to compose.

“So I chose not to write,” she admits. “I got to where I was afraid to write bad songs and afraid to face the fact I might not be able to do it at all.”

Almost twenty years later Mattea was reintroduced to the process through her songwriting husband Jon Vezner and his writing partner Sally Barris with an invitation to collaborate on “The Innocent Years. ” Mattea has contributed a few songs to her albums since and has one in the can for her upcoming Narada project due in 2005.

“At this point I haven’t written all my best ideas ten times over, so there’s certain freshness in coming to it not knowing the rules,” says Mattea. “Part of why I’m being compelled to write now is that I’m older and have more life experience.”

Wainwright, who is about to enter the studio for album No. 22, likens the songwriting process to fishing.

“There’s a waiting period, you have a bite and there’s a certain amount of skill in getting the fish into the boat,” Wainwright explains. “Sometimes you can be out there for days and months without anything to show for it.  When I was younger and writing three or four songs a week, I’d hit periods where I wouldn’t write anything and I’d worry.”

But Wainwright says the proper lure is patience.

“My remedy is to basically lighten up and wait,” he says. “My other technique is to write bad, throwaway songs. Sometimes the process of picking up the guitar and trying to write can lead to an actual fish.”

So how did Crenshaw, who now has 11 albums — including 2003’s acclaimed What’s In The Bag? — thwart his nemesis?

“I can’t remember,” he confesses. “But I think I just needed to shut down and regroup, you know? When people have writer’s block, they might not realize it’s time for them to do that. You might have to work through something or solve some problem in your life. The key to writing is to be able to clear your mind and let your imagination work: That’s the whole trick to it.

“You’ve got to pace yourself.  If your stuff is going to really evolve, sometimes you have to take a breath, get some distance from writing and just live life for awhile.”

Be the first to comment on "Blocking Writer’s Block"