“We had no intention of turning professional. We didn’t even think of this as a career.”

Anna McGarrigle is sitting at a table in one of the Lakeshore Boulevard offices of MCA Concerts Canada next to her older sister Kate, attempting to explain the anomaly that has resulted in seven highly respected albums and 20 years of wonderful folk music, and she’s having a real time of it.

“I remember when I was pregnant, we were trying to make a deal with a concert promoter in New York,” she recalls. “I told him we couldn’t do the date because I wanted to go to an animation festival. I definitely put the career on the back burner at that point.”

“We were impossible,” interjects Kate, her shoulder-length hair offsetting Anna’s China doll cut. “We were so bad, even our lawyer fired us! 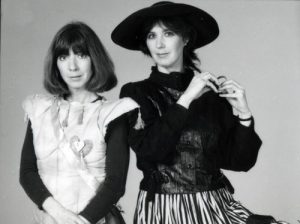 In town to promote tomorrow night’s Danforth Music Hall concert to push their latest album, Matapedia, the Montréal-born Order Of Canada recipients are extremely reluctant to use the “E” word – entertainer – to describe themselves.

“I would say our kids probably like performing more than us,” says Kate, referring to Rufus and Martha, the children she bore to her ex-husband, revered folksinger Loudon Wainwright III.

“Loudon lives to be on stage, and it comes to my kids much more honestly. It’s in their genes.

“Going on stage can sometimes be a chore, I think. The pressure is on you because you think, ‘These people have come to see us and they’ve paid good money. Do they really like everything we write?'”

“We make our living from songwriting,” adds Anna, 52, Kate’s junior by two years.

“There’s a certain comfort in songwriting,” Kate echoes. “I remember that I was standing in a line once, and someone recognized me. I felt so uncomfortable, and then I began thinking, ‘Well, how should I react?’ I figured that was one of the reasons I’ve stayed in Montréal all these years — not to be a star.

“It’s even more difficult maintaining stardom when you’re a woman. You get to be a certain age and you think, ‘When I’m a due for a facelift?'”

Such qualities have exemplified classic albums as Dancer With Bruised Knees and Heartbeats Accelerating, tapped from a rich musical tapestry of homespun diaries and life experience. They’re the real-life confessionals that inspire fellow songbirds Linda Ronstadt, Emmylou Harris and Maria Muldaur to cover songs like “Heart Like A Wheel,” “Cool River” and “Heartbeats Accelerating.”

Cozily wrapped in a coat of nectarine harmonies, rustic folk-hued charm and acute observation, Matapedia is the latest addition to the catalogue, flowing smoothly from the lost innocence of “Goin’ Back To Harlan” through the troubled mortality of “Why Must We Die.”

“Matapedia is a nowhere town near the border of Quebec and New Brunswick,” says Kate.

“It’s the river, it’s the railroad, it’s the town. It’s a place where the Montréal-to-Halifax train goes through at 4:00 a.m.”

“The album’s about jumping into a car with just enough money to see how far you can go, but then you have to come back,” adds Anna. “It’s about testing that limit.”

Lord knows the McGarrigles have been testing the limits of their fans’ patience for years. Matapedia is the first album since 1990’s Heartbeats Accelerating, and only their second since 1982’s Love Over and Over.

“We don’t release a whole lot,” agrees Kate, attributing former record company problems and an aborted recording session as chief factors to the six-year delay between albums. “We should release more.”

However, you can’t shake the feeling that les soeurs McGarrigle feel fortunate to be in the game at all.

Initially, Kate studied engineering in university and Anna enrolled in art school. Music had been a part of their lives since they were children, when nuns taught them piano while they were growing up in St. Sauveur, a tiny resort village about an hour east of Montréal

At 13, they turned their attention to the guitar. As teenagers, the McGarrigles formed The Mountain City Four and gained an encyclopedic knowledge of folk music.

“It was a social thing,” Kate reports.

“We never went too far afield, playing mostly the Eastern townships about once a month. Once we sent a tape to Mariposa and were promptly rejected.”

In 1968, Kate relocated to New York, eventually marrying Wainwright and retiring to family life. A year later, Anna wrote her first song, “Heart Like A Wheel.” When a member of McKendrie Spring requested permission to record, Kate thought it was time to form a publishing company.

Their big break came in 1974. Linda Ronstadt recorded “Heart Like A Wheel” for an album that turned out to be her breakthrough, and Maria Muldaur shortly followed with “Work Song.” A few years later, the McGarrigles sang together professionally for the first time when producer Greg Prestopino hired them for harmonies for a new Muldaur album in 1975.

Today, the McGarrigles seem preparing to pass the torch to a new generation: Rufus Wainwright has just secured a contract with Dreamworks for his piano-inspired cabaret stylings, while daughter Martha will warm up the Danforth Music Hall crowd tomorrow night.

“Martha has more angst in her songs. She’s more influenced by her father. Rufus is more like Kate,” Anna adds.