PUBLISHED IN THE KITCHENER-WATERLOO RECORD ( AND THE HAMILTON SPECTATOR) on January 25, 1997

Nash The Slash is the ultimate Canadian cover artist.

Whenever he’s performed in public, the Toronto-based electronic musician has been an intriguing sight, dressed in a top hat, sunglasses and swathed head to toe in bandages. 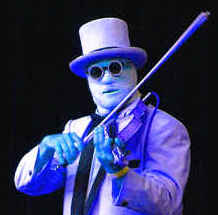 Now celebrating his 20th year in the public eye, this chic version of The Invisible Singing Man — a bow-wielding mummy with a warped sense of humor — figures he’s been around too long to take them off.

“The older I get, the better they look on me,” jokes Nash from his downtown Toronto “crypt,” prior to a rare solo appearance this Saturday at Mrs. Robinson’s.

Long before The `X’ Files, laptop computers, and polyphonic synthesizers were a spore in their creators’ conscience, Nash The Slash was churning out self-sufficient multi-media performances armed with his violin, electric mandolin, echoplex and multiple reel-to-reel tape recorders.

“I was the only person doing it solo and live,” says Nash, unwilling to yield his secret identity because he enjoys anonymity.

An electronic music pioneer who got his start in the ’70s during the zenith of such synth geniuses as Tangerine Dream, Larry “Synergy” Fast, classical sonic architect Isao Tomita and ambient music godfathers Brian Eno and Steve Hillage, Nash carried on the experimental tradition of Toronto’s Syrinx.

When he wasn’t busy entrancing us with his ghoulish, space-age instrumentals or wacky cover songs that he released on such albums as Bedside Companion, Dreams And Nightmares and Decomposing on his own Cut-throat Records — one of the first Canadian underground indie labels — Nash also contributed to pop history as one third of progressive rock trio FM, best known for their stunning 1977 epic Black Noise.

“We flogged Black Noise to every record company in Canada, and nobody wanted it,” Nash recalls. “We finally signed up with a small New Jersey label called Passport, distributed in Canada by GRT, and they ended up with a platinum record that sold 100,000 copies.”

Nash’s involvement with FM was an off-and-on partnership rekindled a few years ago when he rejoined keyboardist and singer Cameron Hawkins and drummer Martin Deller in 1994 to commemorate the CD debut of Black Noise.

They also recorded a live enhanced CD called Commemorative before the book on FM was closed once more. Nash expects it to remain shut.

“I’m not keen on the retro aspect of it all,” he says. “Especially in light of the Max Webster reformation and the Coney Hatch — well, Coney Hatch never died. But I have no interest in it.”

His reputation for cheeky covers of popular songs as “19th Nervous Breakdown “and “Deadman’s Curve” precedes him, although he balks at the suggestion that he’s a strictly an electronic jukebox of old camp.

“I think I have a unique take on covers, ” Nash admits. “People have the impression they’re all covers. It’s a half truth. My last record album American Bandages was all covers. But my first album Bedside Companion , and Dreams And Nightmares on Cut-Throat Records are all original.”

Nash says he’s planning to reissue remastered versions of his earlier albums on his revived Cut-Throat label, and is planning a new record tentatively titled End Of The Millennium that will feature “lots of original material.”

His cult status even got him signed to Virgin Records when he relocated to England for a year in 1980, resulting in the album Children Of The Night. 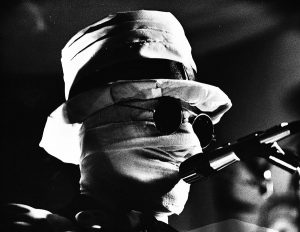 “(Virgin founder) Richard Branson was really a wonderful guy, and I worked over there quite heavily,” says Nash. “But then I returned to Toronto and Virgin didn’t have an office here. I found that they lost interest unless you were on their doorstep.

Nash’s talent has also made a cinematic splash. He’s renown for his atmospheric scores, rejuvenating such silent classics as Salvador Dali‘s 1928 short Un Chien Andalou , The Cabinet Of Dr. Caligari,The Lost World and Nosferatu. On the more conventional movie side, producer Bruce MacDonald has used Nash to score his cult classics Roadkill and Highway 61.

Concerning those bandages, how did he become wrapped up in them in the first place?

“I used to perform at The (alternative Toronto nightclub) Edge, and I was always interested in making an event out of it. Some of my shows were entitled Nash Easter Bunny, Santa Nash, The St. Valentine’s Day Massacre.

“There was also a show I performed around the time of the Three Mile Island nuclear disaster that I called Neighbourhood Alert. I used phosphorescent makeup, so when the stage lights hit my face, I glowed in the dark. That was my shtick.”

Eventually Nash decided to glow on with his radiating personality instead of the paint, but the bandages stuck.

“In my heyday, I’d spend $800 a day in bandages,” he admits. “People would ask me, why don’t you get an endorsement from Johnson & Johnson’s?”

The answer may surprise you.

“I don’t want to hear about using bandages for amusement. They are intended to heal people,” says Nash, who lists his age as “not dead yet” but admits to being “fortysomething.”

Needless to say, a Nash The Slash concert goes beyond the norm.

“I’m from the old school, where the stage is really sacred,” admits Nash. “It’s more important to be entertaining and theatrical. I’m not keen on what I call this guitar campfire music scene. I’m more interested in putting on real spectacles, like KISS or Pink Floyd or Arthur Brown. I use strobe lights and strobe machines, the whole nine yards.”

And Nash has also had many memorable concerts in the Kitchener-Waterloo area.

“The Coronet. What a place! Bizarre things happened there,” he reminisces. ” You’d go there one night and there’d be hundreds of college types, and a few months later return and it would be full of bikers.

“I remember that at the end of my stage show, which included a big screen and rear slide project, the word FINIS was projected to signal the end of the show. Some drunken idiot thought my name was FINIS and started yelling, `Great show FINIS! Come back FINIS! ‘

“Only in Kitchener,” he chuckles.

There was also the memorable Nash The Slash look-a-like contest at the University Of Waterloo Hallowe’en night 1985.

“There was quite a turnout of Nash look-a-likes, about a dozen people,” Nash recalls. “One of them was a high school math teacher who was a midget. He had me down perfectly, right down to the trenchcoat and the boots.