“Is this what you wanted, Sammy Hagar?

Sammy Hagar, is this what you wanted?

Dave lost his hairline, but you lost your cool, buddy.

–from “Van Halen,” by Nerf Herder.

You can be sure the members of Nerf Herder aren’t shedding any tears over Sammy Hagar‘s recent ouster as the lead singer of influential L.A. rock gods Van Halen.

If you listen to the frank and callously humorous lyrics of the Santa Barbara power pop trio’s hit song “Van Halen,” you’ll know they really didn’t want him there in the first place.

It seems that in the deep in the hearts of guitarist, singer and chief songwriter Parry Gripp, bassist Charlie Dennis and drummer Steve Sherlock, gristle-voiced Hagar wasn’t the proper choice to replace lion-maned David Lee Roth as Van Halen’s chief larynx back in 1985. 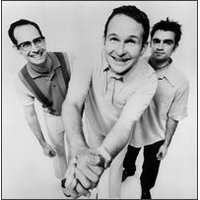 “The music Van Halen made after Sammy came on board was terrible,” says Gripp unapologetically from a tour stop in Louisville, Kentucky, where two-year-old Nerf Herder recently wound down some dates with Weezer.

In the song “Van Halen,” Gripp declares himself a disciple of Diamond Dave’s vaudeville vocal delivery, a style that usually offered an entertaining contrast to guitarist Eddie Van Halen’s mind-boggling, innovative fretwork, and a mouthpiece to such arena rock classics as “Runnin’ With The Devil,” “Jump” and “Panama.”

After a 20 million album selling run peaking with the band’s fifth platter, 1984, the strain between Van Halen’s two chief celebrities precipitated Roth’s departure. Months later, former Montrose frontman and mildly successful solo artist Sammy Hagar was rescued from obscurity and installed to usher in the next era of the band’s history.

Gripp, 29, recalls the verbal aftershocks concerning Hagar as they reverberated around his locker.

“When I was in high school, it was a big deal,” he remembers. “I never cried over it or anything, but I know plenty of people who did.”

Although Hagar’s presence didn’t seem to hurt the band’s platinum, chart-topping run as it continued with the albums 5150, OU812  and Balance, he never won over Van Halen’s followers from day one.

“A lot of people have approached us telling us how much they like the song,” says Gripp, whose band makes its Toronto concert debut Wednesday (February 5) at Lee’s Palace for an exclusive performance for CFNY contest winners.

Surprisingly, “Van Halen” seems to have touched a nerve. Perhaps it’s because the soap opera calliope is continuing to revolve, as Roth recently returned to the fold late last summer to contribute a couple of new songs to Best Of Van Halen Volume One.

Under the mistaken assumption it was a full-fledged reunion, Roth publicly berated Van Halen for misleading him when it was announced that Extreme singer Gary Cherone would be assuming Hagar’s position.

Whatever the reason, Gripp is relieved he didn’t jettison “Van Halen” from the Nerf Herder song list, as originally planned.

“Our bass player Charlie convinced me otherwise. He thought we should keep it because it was funny,” he recalls.

It turned out to be a godsend for the band’s fledgling career, serving as a slingshot into the big leagues. “Van Halen’s” elementary chord structure and flippant storyline caught the ear of Lapwagon singer Joey Cape, who had formed his own small San Francisco label, My Records.

Hiring the band to record the song for a compilation he was producing, Lapwagon broadcasted “Van Halen” as his calling card one afternoon on local modern rock station LIVE 105.

Phones rang off the hook, and demand for the song spread to other playlists like wildfire, as independent sales of the band’s self-titled album skyrocketed. Last fall, New York major label Arista took notice and signed them to a deal, re-mastering and re-issuing their album in the U.S. in December.

Nerf Herder was released in Canada by BMG earlier this week. Christened by drummer Steve Sherlock after a scene in the Star Wars saga The Empire Strikes Back where Princess Leia dismisses Han Solo as “a half-witted, scruffy looking nerf herder,” the band could well be the illegitimate orphans of New Jersey’s Dead Milkmen for their warped sense of humor.

Nerf Herder’s “Van Halen” seems to be tapping into a trend that shares a kindred spirit with The Refreshments‘ “Banditos,” Nada Surf‘s “Popular,” Cake‘s “The Distance” and The Bloodhound Gang‘s “Fire Water Burn”: the novelty.

Parry Gripp calls the movement “geek rock,” and says his band’s music is an antidote to the serious brooding pop supplied by Pearl Jam, Soundgarden and Stone Temple Pilots.

“It’s just a sign that people are lightening up,” observes Gripp. “People are tired of hearing dark, gloomy, whiny sentiments…not that we’re not whiny.”

Nerf Herder’s debut album is chock full of off-beat tone poems, ranging from the senselessly sublime “Sorry” (‘Sorry I showed up at your party/ Sorry I drank all your Bacardi’) and the obtusely confessional “Nosering Girl” to the whimsical “I Only Eat Candy,” where Gripp eschews murder and manufacturing atomic weapons for his vice of eating sweets.

It’s goof rock all right, whipped up with the punk frenzy of Green Day lite and topped with a Maraschino cherry of sarcasm.

“I can’t get up on stage and be taken seriously,” admits Gripp, who decrees he and his charges will deliver a half-hour set “faster and more emotional than a Bruce Springsteen concert.”

As for Van Halen fallout, Gripp says he’s heard through the grapevine that Eddie adores the song and tacitly sent his stamp of approval by granting Nerf Herder the right to use the band’s likeness on video.

“I know that Eddie Van Halen allowed us to use Van Halen paraphernalia in the video for the song,” says Gripp. “You have to get permission from the artist to use their posters and stuff like that. And we haven’t got any mean letters from Sammy Hagar.”

The real question is, what will Nerf Herder write about Gary Cherone?