The Mavericks are expanding, and Hamilton concertgoers will be among the first to notice the difference when the Grammy-winning Miami band hits Copps Tuesday, sandwiched between Tim McGraw and Charlie Major.

“We have a four-piece horn section traveling with us, and we have a friend of mine by the name of Jamie Hanna singing harmony and playing rhythm guitar and playing some percussion as well,” announces singer and songwriter Raul Malo over the phone from Edmonton.

Due March 10 on MCA Nashville, Trampoline  takes Mavericks’ fans away from the grandiose ’50s and ’60s country flair of earlier platinum albums like What A Crying Shame  and Music For All Occasions  and replaces it with festive horn and string arrangements, Spanish-flavored shuffles, mambos, gospel, vaudeville, pop, and even an instrumental.

“The only criteria for the songs on the record was that if we enjoyed it and it put a smile on our face, then it was going to go on the record, regardless of style,” says Malo, who composed the entire 13-tune album last year while the band took a 10-month hiatus.

The one consistency surviving from earlier albums is Malo’s trademark balladry, deeply romantic songs featuring his coffee-coated tenor crooning in the great tradition of Roy Orbison. One show-stopper, entitled “Dream River,” will be used in the upcoming Robert Redford film The Horse Whisperer.

“Music should be romantic and it should be entertaining,” explains Malo. “Maybe (the songs) had something to do with the fact that life is great for me personally. I’ve got a great relationship with a beautiful wife. I’ve got the kids, and to me, I love the subject matter. I love romance. I guess if it comes out in the music, then I’m not going to do anything to stop it. I’m just going to go along with it and do the best job I can.”

Malo says he spent a lot of time with his family after the band finished off its Music For All Occasions  tour by recording the Canada-only It’s Now! It’s Live! album in Toronto and Ottawa last January. 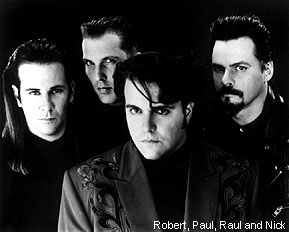 “For the first time I had time to really absorb a lot of things, spend a lot of time with family and friends and really go through life as an observer,” he explains. “I think that’s when you pick up the strongest stuff for material for writing or any creative thing you do. It really helps to just get away from it for a while.

“I also spent every moment that I could with my kids. I have two little boys, a two-year-old and a one-year-old. So I spent the year with them. I thought it was important to bond with them.”

Hamilton audiences will have a chance to judge for themselves, as Malo says The Mavericks plan to preview a generous portion of Trampoline Tuesday night.

“Almost the whole set is new stuff, with only a couple of the old songs thrown in,” reveals Malo. “I know that’ll probably upset a couple of people, but I think that in the end, they’ll really take a liking to it. Hopefully they won’t be too offended.”