His generous gift to supermodel pal Linda Evangelista and the women of the Niagara Region is a benefit concert this Sunday at the Jack Gatecliff Memorial Arena in St. Catharines to help finance a local breast screening and research clinic to the tune of $150,000 – $250,000. 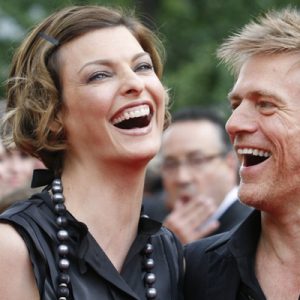 According to Margaret Cyr, director of The St. Catharines General Hospital Foundation, the $1 million clinic is the first community hospital — and one of only four in Canada — to own a digital clock system that enables medical staff to perform immediate and accurate biopsies.

“Hopefully the clinic will do for breast cancer what the pap smear did for vaginal cancer — reduce the death rate by 40 percent,” says Cyr.

This isn’t the first time the Kingston-born Adams has rallied to a charitable cause, as the “Tears Are Not Enough” campaign he spearheaded raised millions of dollars to battle African famine in the mid-80s.

Nor is it the first time he helped raise funds for breast screening and breast cancer research, he recalled last December during an informal, intimate press conference at the Four Seasons Hotel in Toronto.

“We did a record this year where all the proceeds went to breast cancer research,” recalled Adams, referring to a compilation he contributed to called Man To Woman  that was distributed through Self magazine. The 38-year-old singer and songwriter recorded an exclusive version of his chart-topping `Have You Ever Really Loved A Woman’ that featured Evangelista on accordion.

“I also did a concert in L.A. last year for breast cancer research,” he adds.

“I’m really excited because I wanted to bring it to Canada. I’m happy to help out.”

Adams says he wanted to contribute because people in his circles have suffered from breast cancer.

“I’ve had friends that have been stricken by it, and people that have worked for me have been afflicted by it,” says Adams, who now makes his home in London, England.

“It’s just horrible. So I wanted to do something about it.”

Benevolence aside, Adams is also in the midst of a cross-Canada tour to promote his new album Unplugged, the latest in a series of acoustically-dominated superstar recordings generated by the highly acclaimed MusicTelevision Series of the same name.

With sales already past the 200,000 mark in Canada, the collection of refitted hits and new songs is proving itself to be the latest chapter of Adams’ successful 22-year run, a career that began as temporary lead vocalist of Sweeney Todd.

Since dropping his disco-flavored single “Let Me Take You Dancing” in the late ’70s, Adams has cultivated a global following en route to becoming one of Canada’s most successful self-sufficient pop stars. He’s sold over 50 million records, propelled by such #1 hits as “Run To You,” “Heaven,” “All For Love” and “Can’t Stop This Thing We Started.”

Successful songwriting partnerships with Jim Vallance, Robert John “Mutt” Lange, Michael Kamen and Gretchen Peters have yielded Oscar-nominated, Juno and Grammy-winning tunes, and Adams’ “(Everything I Do) I Do It For You” was only recently ousted as the U.K. champion for most weeks at #1 by Elton John‘s remake of “Candle In The Wind.”

Despite a career that could easily encourage early retirement, Adams says he’s never been more pumped about writing music.

“I’m more excited about making music now than I’ve ever been,” says Adams, attired in a black sweater and slacks as he perches on the hood of a couch.

“This record feels like the beginning of a new chapter.”

Adams says he’s already recorded nine tracks towards his next studio album, and will be finishing up at the conclusion of the Canadian tour.

“People ask me what’s your favorite album. It’s always the one I haven’t written,” he says. “It’s the demo tape that’s sitting up in my bag upstairs. That’s what I’m excited about. Anytime I have something new I can play.”

Adams says he recorded Unplugged  after striking up the courage to perform acoustic guitar in front of an audience.

“I came to the conclusion that going out and playing some acoustic songs off our last record (18 Til I Die ) gave me the confidence to play live. As a result, I felt better about going into the unplugged arena.”

Adams said he didn’t want Unplugged  to be a “greatest hits live.”

“The only reason there are songs on it like the ‘Summer Of ’69’ is that it was a TV show that was turned into a record,” he confesses. “I wanted the TV show to be a little retrospective, a little obscure and a little bit about the future. I think I achieved that.”

As an entertainer, Adams sees himself as a diplomat.

“I kind of view myself as an ambassador to this country,” he says. “I want to make people proud. I do want people to think of me as someone as they can say, ‘You’re Canadian, and that’s all right.'”