PUBLISHED IN THE HAMILTON SPECTATOR ON Thursday, March 28 1996 to promote a Tracy Bonham performance at Toronto’s Horseshoe Tavern

THE BURDENS OF BEING TRACY BONHAM

Tracy Bonham is standing inside a phone booth somewhere in the Southwestern United States, talking about her first album, The Burdens Of Being Upright, and thankful that she didn’t opt for a career in classical music.

The way the 27-year-old Boston-based native of Eugene, Oregon sees it, her days as a conventional violinist were numbered. 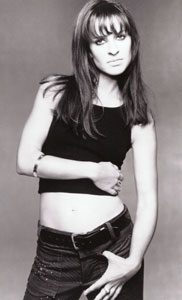 “I wasn’t willing to spend four to six hours in a practice room getting this damn sixteenth note run down,” says Bonham, whose designs to be the next Itzhak Perlman quickly dissipated when she relocated to Boston’s famed Berklee School Of Music four years ago.

“I was really, really serious about it for a while. Then I was, like, ‘Wait a minute, this isn’t something I want to do.’

“I just burned myself out.”

A confessed lazy streak allowed her to switch to singing for a living because “I didn’t have to work at it so hard.” Bonham also says her first semester at Berklee was a letdown after a couple of years of private studies at The University Of South California.

“It had a great reputation on the West Coast,” says Bonham. “And then I got up here, and possibly because I’ve had two years of intense music school at USC, I looked around and I saw kids that had just started playing their instruments. It was not challenging, and you could get away with murder there. So I thought it was a joke. I was a vocalist at the time, and I thought it was ridiculous.”

“I think it was when I’d been in Boston for four years I said, ‘Hey, I want to create now, instead of interpret and regurgitate.'”

Bonham learned to play the guitar, began writing her own quirky rock songs and quickly became a fixture on the Boston alternative music scene. She released her debut EP The Liverpool Sessions  back in ’94 independently, signing with Island shortly thereafter. That led to hooking up with Bon Jovi manager Scott McGhee, and her eventual Island debut The Burdens Of Being Upright, released two weeks ago.

“You know, I’m so much like Bon Jovi it’s scary,” she giggles over the line.

“I’ve heard this one story about Bon Jovi actually flying out into the audience because he wanted to get to the back of the crowd in an arena. That’s what I want to do, so he’s going to help me out with that. I think Scott’s done an awesome job. I like working with him.”

Whether or not McGhee can work the same magic for Bonham as he’s done with Bon Jovi and Motley Crue in the past remains to be seen, for Bonham’s raw, seductive and intelligent gems with titles like “Brain Crack” and “Sharks Can’t Sleep” are a far cry from the bombastic “Livin’ On A Prayer” and “Doctor Feelgood.” However, Bonham is hopeful that the recent influx of excellent female songwriting talent ranging from Joan Osborne to Poe to Heather Nova will work in her favor.

“I think it’s kind of the fashion now, which means there’s going to be backlash, which means you have to justify what you do, which is stupid because of my sex,” she states. “But I also think there’s advantages that have opened the door.

“Maybe with my stuff, people would have turned their noses up at it at first if they hadn’t warmed up to this trend. It’s weird, because there have been women fronting bands this whole time. It’s just now that everybody’s talking about it.”

The critical reaction to The Burdens Of Being Upright  has been positive, and Tracy Bonham hasn’t abandoned her violin, accompanying herself and squeezing out as many distorted sounds as possible as she tours for the rest of the year.

“There’s a lot more drinking in rock,” she laughs.