PUBLISHED IN THE HAMILTON SPECTATOR ON THURSDAY, APRIL 11, 1996 to advance shows at Toronto’s Opera House (April 14) and Kitchener’s Volcano (April 15)

Is David Lowery the most misunderstood writer in American pop?

“I’ve developed a little bit of a reputation for being a very cynical, sarcastic person,” says the lead singer for Cracker, his deep baritone resonating over the line from Saskatoon.

“But if you actually look at the records, and how often that might occur — which is usually a couple of songs — it’s usually just a tool for me to tell a story.” 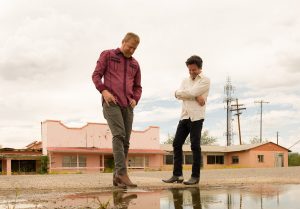 Lowery, 35, said Tuesday he was amused about how often the band’s hit “Low” was misinterpreted by the press when it was released in 1994.

“I remember reading about ‘Low’ on the last record. Some of the first reviews that came out said, ‘This is a very cynical song.’ And there’s nothing cynical about it,” he laughs.

“It’s a very earnest song. It may be abstract, but I guess they were expecting something else. So in that way, I feel misunderstood.”

Lowery admits he could be misinterpreted again for “I Hate My Generation”, the band’s latest hit off their brand new album, The Golden Age.

“The song ‘I Hate My Generation’ is obviously setting myself up for something like this, but it’s the only song that’s kind of angry on the record,” he explains.

“To me, it’s actually a very liberating song. What I was pissed off about was a rash of songs by my peers where people were just pissed off. I was just tired of it. It was sort of an anti-cynical statement.”

Although Cracker is currently on an extensive Canadian tour to promote The Golden Age  and hopefully win a new generation of listeners, people familiar with Lowery’s music have been delighted since he emerged as an innovator in the mid-80s as the leader of alternative rockers Camper Van Beethoven, described by The Trouser Press Record Guide as “playfully eclectic post-hippie California surrealists (who) suggest what the Grateful Dead might sound like if they had a sense of humor and knew how to write pop songs.”

Camper Van Beethoven amassed a sizeable cult following with such underground and campus radio hits as “Take The Skinheads Bowling,” releasing four albums and disbanding in 1989.

Shortly thereafter, Lowery formed a partnership with guitarist Johnny Hickman and Cracker was born. They scored immediate attention with their self-titled 1992 debut album and the song “Teen Angst.”

As humor is often a chief component of his writing style, Lowery is dismayed when rock audiences take Cracker’s music too literally.

“A good author will use humor and irony and absurdity, or say something outrageous, like an overstatement,” he explains. ” ‘I Hate My Generation’ is an overstatement. I don’t really mean it, and you can read between the lines.

A lot of times, things are taken completely literally when you write them in rock songs, which is absurd to me because that’s not how people talk in real life.

As previously mentioned, Lowery grew up in California. Shortly before the recording of Kerosene Hat, however, he relocated to Richmond, Virginia, where Cracker is now based.

“I just really burned out on L.A.,” says Lowery. “Something isn’t right about that place for me. It doesn’t make me happy. It bums me out.”

However, he has bought a remote cabin out in Pioneertown where he stays whenever he has to be on the West Coast.

“It’s only two hours out of L.A., and a great vacation spot,” he says.