As appeared in the late, lamented on-line magazine Magnet, 1996

Stardust, Baked Beans, Orgasms and The Meaning Of Life

The Bowery Boy of blue-eyed soul is back, and man is he stylin’.

Although the only reason Mick Hucknall, singer and architect of Simply Red, Britain’s most astoundingly successful R&B export at 26 million records sold and counting, is in Toronto in the first place is for a round of interviews to promote Life, his band’s latest musical libido torpedo, he is a walking billboard of Parisian chic looking for a party.

Even to the untrained eye of someone who doesn’t know the difference between Anna Sui and chop suey, the black shirt nestled between Hucknall’s skin and immaculate vest seems be an invention of alchemic defiance: an elegant balance of leather and silk that tastefully complements silver silk trousers.

Then there’s those dazzling carrot-topped curls of the freckle-faced, Manchester-born 35-year- old, now mutated into serpentine dreadlocks that sprout from his head, snake down his shoulders, and dominate his coathanger frame. 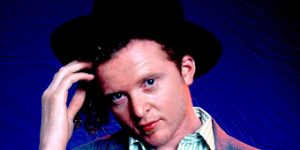 Yes, inch by inch, Mick Hucknall is a pop star. Any suggestions or doubts about his status were permanently erased by 1991’s Stars, thus far Simply Red’s crowning commercial achievement. It seduced over 9 million listeners, won a flock of awards, and remains the best-selling album by a British band in the U.K. at almost 4 million copies.

Yet he seems refreshingly modest. Though he may burn up stages and studios with his feathery torch ‘n’ soul tenor, a heavenly hybrid of cinnamon-scented sensuality and Al Green empathy, and carry an aura that suggests he’s got the best job in the world, in person Hucknall is a normal bloke. Take away his fancy clothes, place a sash around his torso and a bow and arrow in his hands, and you have….Cupid?

“A friend of mine in Paris told me that before he knew me, he always used to play my records when he wanted to seduce a girl,” recalls Hucknall, reclining in an easy chair and settling into a fake French accent as his face brightens with the memory.

“I think there are a lot of people out there procreating to Simply Red. I really do. And good luck to them. I hope they enjoy it. I hope she has many orgasms.”

Bedsprings will assuredly start bouncing again now that Life has hit the streets. A fluffy collection of pheromone fostering grooves, passionate purring and sparkling songs that range from the dazzling Brazilian carnival feel of “Fairground” to the frothy pillow talk of “Remembering The First Time,” Hucknall and bandmates Fritz McIntyre on keyboards, Ian Kirkham on saxes, Heitor TP on guitars and background vocalist Dee Johnson once again assert themselves as ambassadors of intergalactic love.

And we do mean extraterrestrial.

“It’s true that most of recorded music is about love in one form or another,” Hucknall explains. “But I opened up a bit more this time by dealing with what I describe as love in the universe. My last album is called Stars, and this one’s called Life, and science has proved to us since the release of Stars that we came from the universe, that we are made from stardust.”

Hawking — I mean Hucknall — doesn’t offer any further insight into his theories about science and supernovas, but he does feel that we are all One With The Universe.

“I use the analogy a lot of looking at a couple, and seeing how they’re dealing with the world as their lives change,” Hucknall continues. “I think of a country in the same kind of way, because countries are made of the family fabric. I think in terms of the human race and how it relates to the rest of the animal kingdom, Earth, and then the whole universe in general. I’m just really making the point that it’s all connected.” 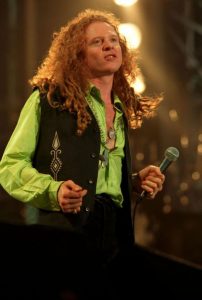 The next target is religion.

“I object to the notion of many traditional religions that tell you we’re somehow special, and somehow we’ve been given the right to do just what the hell we want, like a bunch of cyberspace hooligans, just taking what we want and not putting it back,” he says, hands waving wildly to illustrate his point.

He mourns the human tendency to waste rather than renew, and equates the natural rhythm of life to restocking baked beans in a grocery store.

“We have to find and devise ways of putting it back again. One of the things I would approach is big business, and say to them, `It’s now becoming economical to be environmentally friendly.’

Then he’s talking about wind and wave machines in Europe, and just as I’m about to suggest a visit to a decompression chamber because we’re getting way too deep here — it is only an album we’re talking about, for Pete’s sake — Hucknall ties it all together into one, neat package.

“The general themes of the record are really saying, that in the end, it’s up to you,” says Hucknall, who bowed Simply Red in 1985 with the album Picture Book. “In my song ‘So Many People,’ I’m thinking that love is not only for the human, but for the universe.”

Describing Simply Red’s music as “a series of images and subjects that intertwine and crossover” the former DJ and Frantic Elevators frontman reveals that Life is the first step of a new direction.

“What I’m going to try to do over the next few projects is to start marrying the styles and coagulating them into one song,” he says, citing a desire to follow jazz rather than rock or pop archetypes.

“What I want to try and create over these next few years is a very individualistic style that people perhaps see as breaking new ground. If they come and see us over 20 or 30 years, I want it to be a specific genre.”

Hucknall admits that for a few years now, Simply Red has been little more than an extension of himself and a revolving door of opportunity for the rest of his band members. Life, for instance, used the journeyman rhythm section of Sly Dunbar and Robbie Shakespeare for the bulk of the sessions.

“Because I’m writing effectively 85 percent of the songs, inevitably the notion of a band starts to fall apart. What’s developed over the years is a notion to appeal to the media to think of Duke Ellington and Miles Davis rather than think of the ’60s vision of the band. It doesn’t have to stay completely fixed all the time. People come and go, and hopefully go onto better things for themselves.

“To me, I’m very excited by the notion of bringing young musicians into the organ of Simply Red, and giving them this huge opportunity, a huge window to be see in. I’ve just recent hired these two guys that are going to come on tour with us on bass and drums, Steve Lewinson and Delroy Bailey. They’re only 20, and they’re kicking! To have that kind of youthful exuberance in a project just lifts the whole morale of the band. It’s the old jazz notion of how to make bands that has really turned out to suit Simply Red.”

Plus, the Mickster is looking to make a few personal changes.

“I’m actually designing it to do less than more, because in five or six years I want to have kids,” he admits. “You can’t really do that traveling around the world doing concerts and getting seduced by lovely girls all the time. It doesn’t really go with family values, which I accept, because when you’re dealing with kids, the whole rule book changes. I accept that. So when it’s time, I’m going to make sure that I create an environment for myself and my family, that I can give them the time that they need.”

Spoken like a man who’s discovered the true meaning of Life.