A few years ago, however, the 47-year-old made a shocking discovery: after playing the wind instrument on 28 Jethro Tull albums, he’d been using the wrong technique. 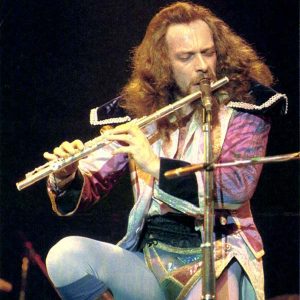 It was Anderson’s daughter, a flute student herself, who pointed out the error of his ways.

The results of Anderson’s newfound improvement can be heard on his latest album, Divinities — Twelve Dances With God, an instrumental effort recorded with an orchestra that features the Scottish-born musician playing a wide variety of flutes.

Considering Anderson’s history with the flute, which began at the age of 21 when he founded Jethro Tull in Blackpool, England, it may seem weird that such an album took so many years to come to fruition. However, Anderson says he was initially hesitant, planning instead to record either a blues project or an acoustic set in between Jethro Tull concert dates. EMI Music’s classical division convinced him otherwise.

“They wanted me to consider an instrumental album focusing on a religious theme,” says Anderson. “It wasn’t something that I knew how to do, therefore it was a bit more of a challenge and an oddity.

“Religion is a living and breathing thing. It is the means whereby people through ritual and dogma associate themselves with their Gods. I wanted to sort of record my notebook sketches as a traveling musician. My references here are hopefully buoyant and cheerful, certainly not critical, and I hope I brought on occasion a certain amount of humor in the music as well.”

Now Anderson is taking Divinities  on the road, with a month-long tour that concentrates on the new album during the first half, and revised Tull classics in the second.

“The Tull music is rearranged to suit the feel of Divinities,” admits Anderson. ” Some of the Jethro Tull material does already slip into that mold anyway, because there are pieces like ‘Heavy Horses’ which extensively employed solo violin and multiple string sections. But it’s delightful to play such old Jethro Tull standards as ‘Aqualung’ and ‘Locomotive Breath’ and give them a substantially different feel.” 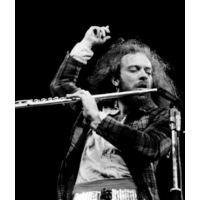 Translating Divinities  to the stage has been easier than Anderson initially imagined.

“Some of Divinities’  string parts would take 20 people to play,” says Anderson. “We have a fairly well known folk violinist named Chris Leslie who plays a five-string violin, which therefore covers the range of both violin and viola. Via MIDI, he’s able to call up multiple violins and violas, and even some cello ranges, to act as an ensemble.

“With rock and roll sound and lights, it’s a big hi-fi experience.”

Anderson also feels his revived confidence in the flute plays a “more assertive and unusual” role in the upcoming Jethro Tull album, which he has just completed and will release in September.

A world tour will follow, with Canadian dates expected in November.

“I’d like to think that a couple of the Divinities  pieces find their way into the Jethro Tull live set, because I’m greatly enjoying playing these on stage, and I have a feeling I will sorely miss playing some of these pieces of music,” says Anderson.

“With the Divinities album, there’s not a single moment I dislike, even though it’s been a year since I recorded it. I hope I can say the same thing a year from now about the next Jethro Tull album.”