AS PUBLISHED IN THE HAMILTON SPECTATOR MAY 9, 1990

Five years ago, British recording duo Tears For Fears ruled the world with their blockbuster album, Songs From The Big Chair.

The album sold 9 million copies around the world, and TFF ruled the airwaves with their anthemic hits “Shout” and “Everybody Wants To Rule The World.”

And even though at worldwide sales of 5 million, the band’s third album — The Seeds Of Love — hasn’t quite matched the success of its predecessor, singer/bassist Curt Smith says he and songwriting partner Roland Orzabal aren’t shedding any tears. 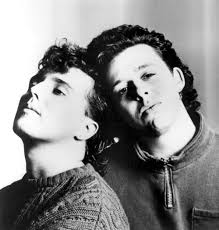 “I don’t know if we really had any desire to equal the commercial success of Songs From The Big Chair,” admitted Smith on the phone last week from Los Angeles, where the band is resting prior to the second leg of its world tour, being launched May 11 in Ottawa before travelling to Quebec City (12), Rouyn (14), Hamilton (15) and Montreal (16).

“We don’t feel comfortable being pop superstars, and the lack of privacy got to be tiresome.”

But Smith says he finds The Seeds Of Love  more fulfilling in other ways.

“Musically, The Seeds Of Love  is more advanced, more mature than anything we’ve done,” he said. “The Hurting  (TFF’s 1st album) and The Big Chair  were very inward-looking, a result of struggling with our adolescence. From the age of 16 to 24  you’re struggling with the terms of trying to become an adult. And then you finally reach an age where you realize you don’t have to lose either your childhood or your adulthood, but you can have the best of both worlds.

“It’s also an easier album for people to relate to. The Big Chair  was inspired more by British pop and musicians like Peter Gabriel and Talking Heads. Lately we’ve been influenced more by stuff like Little Feat and Steely Dan.”

Smith said The Seeds Of Love  provides an even bigger challenge to Tears For Fears, which was born in the studio synthesis era of pop music in the early 80s.

“It’s the very first time we’re really playing this stuff live,” says Smith. “There are no machines or sequencers, or anything. And we’ve expanded to a ten-piece band for the tour.”

Travelling around North America for the next two months, Smith has no idea what’s in store for the band beyond the summer.

“We rarely make plans more than a month or two ahead, because we’re apt to suddenly change our minds, as we’ve inobstensibly proved in our past,” said Smith.

Those changes are well documented in the four year hiatus between their second and third albums, Songs From The Big Chair and The Seeds Of Love.

The band started in the studio twice, dumped original producer Chris Hughes for David Bascombe, and then discovered Oleta Adams singing in a New Orleans dinner club and involved her in the recording process.

She’s now one of the main attractions of the live show, and Smith says Tears For Fears has benefited from her involvement.

“She brings a different dimension to what we’re doing, ” says Smith. “It’s certainly more soulful and warm. I don’t know if we’ll work with her in the future, because she has her own album Circle Of One, coming out this week.”

He also doesn’t rule out solo projects for himself and Orzabal in the future, but says such a move is unlikely.

“I figure Roland and I will probably get together at the end of the year, and decide what we’re going to do next,” said Smith. “We’ve been working together for 16 years, and once you get comfortable with a relationship, it’s harder to throw that away.”