Already elevated to the status of rock immortal for his contribution as vocalist for Led Zeppelin – arguably the mightiest and most influential of the crunch-chord dinosaur rockbands – Plant is enjoying an enormously successful career as a solo artist. His fourth and most recent album, Now And Zen , has gone platinum twice-over in this country, and his current tour – playing rescheduled date at Copps Coliseum this Monday night – has been on the the top-grossing concert events of 1988.

But Plant is more excited about his current band – which includes writing partner Phil Johnstone on keyboards – and the passion they’ve rekindled in his music. 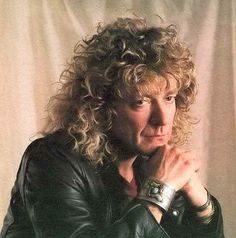 “When the band played Toronto (back in May), it was still very green. We were good, but we were only four or five shows into the tour. Now there’s a new maturity.

“I overworked them for awhile,” says Plant, “And they’ve gone from strength to strength. They’ve given me fire, and now they’re creating their own momentum. I’ve been master of the ship, and now they’ve finally become the comfortable band I’ve wanted them to be. It’s a hard-hitting rock band.”

Plant says he’s rearranged the song list, and says the show has changed about 50%.

“We got rid of some Zep numbers,” said Plant, “But added two very important numbers which allowed me stand and look proudly at my past. It’s a different show, it’s tougher. I would say that if you saw the Toronto show and you’re going to the Hamilton show – if you’re going to be exhausted, you’ll be exhausted earlier.”

“I think this show better realizes my Viking preoccupation with the idea of moving closer into battle,” he continues. “I’m proud to be what I’m doing musically, and finally achieving what I’ve always set out to achieve. It’s serious without being self-indulgent.”

He’s also hoping to get a new album out as soon as possible, and mentions that he’s scurrying to the studio after the interview.

“We’re recording near the home of Leadbelly on Ferguson Street,” said Plant. “I got out of New Orleans because New Orleans and I have this thrilling relationship. Whenever I’m there I catch so much music and wake up with the worst hangovers.”

“We’ve been writing a lot, and I bought myself a national steel guitar to fool around with in the dressing room. But I think it says a lot that we’ve been rehearsing and writing even on our days off.”

Plant describe his next direction as “scorchy psychobilly.”

“I think it’s time to come back out of the darkness,” he said. “It’s great to be happening commercially again, but it’s time to risk all that and get back to the dangerous side of things for awhile. ‘White, Clean And Neat’ – that’s closer to the area of music I want to explore. No more ‘Ship Of Fools’ for awhile.”

He believes in the honesty of delivery, which is why, Plant admits, he looked forlorn on television during the performance of “Stairway To Heaven” at the 40th Anniversary Of Atlantic Records special concert telecast this summer.

“I was very proud of Led Zeppelin,” said Plant. “And I’m proud of ‘Stairway To Heaven,’ but that song is a period piece. People got married to it and now they’re getting divorced to it. Everybody knows that song – the point’s been made.

“So I asked everybody (guitarist Jimmy Page, bassist John Paul Jones and drummer Jason Bonham, son of the late John), ‘why don’t we do something else?’ There were plenty of other songs we could do, and besides, Zeppelin was never known to pander to public taste. Let’s carry on that flag.

“But because we returned to the democracy within that group, I couldn’t stamp my foot in protest. I had respect for the fact that I was in a democracy, and the rest of the band felt obligated to do it.”

“It was really ludicrous,” Plant sighs, and then adds with a chuckle, “I would have preferred to do ‘Rock-A-Hula Baby.'”