The 73-year old Bradley – who produced lang’s latest album Shadowland  – reunited the surviving Angels for a “Honky Tonk Medley” that he said took about an hour to do.

“We tried to find something that was light, fun and not too hard,” Bradley recalls, “Something we could do real quickly, and still have some merit.

“I knew that everybody but k.d. new the songs, but I knew it wouldn’t be a problem with her. We invited the three girls (Lynn, Wells and Lee) up, and we spent about an hour socializing. Then I said, `Okay, all the Angels come in the control room and we’ll work a little bit’. We worked about an hour, and then when we went back in and played back what he had, everybody laughed, enjoyed it and then went home. 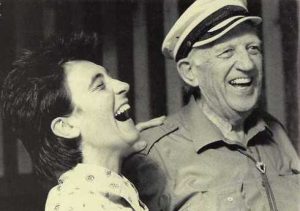 “Honky Tonk Angels’ Medley” closes off the album, which Bradley came out of semi-retirement to produce.

“Well, I’m not a young man,” says Bradley of his retirement. “I worked for one company – Decca Records – for about 30 years. When I was 60, I decided that it was a good time to do things a little less restrictively – not punch the same clock.”

Even though he retired from corporate life, Bradley did continue keep his hand in recording.

“I have two studios,” said Bradley. “I did a project for MCA now and then. I’ve been lucky to have done a couple of movies. I’m still sort of hanging on , but I’m not really out there fighting.”

Bradley, a confessed Rob McConnell And The Boss Brass fanatic who suffered a heart attack last year, said he avoided working with lang at first.

“Actually, I wasn’t looking for anything at all,” he confessed. “I was approached about k.d. some time ago, and it wasn’t because she didn’t sing good – I just didn’t feel like I wanted to get that involved with anybody at the time.

“I had this illness and I was in the hospital, and I had a lot of time to think. I thought, well, maybe I’d like to get back and do a few little things. I still didn’t think about k.d. at that time, and while I was in the hospital recuperating I saw her on the Johnny Carson show, and I saw how much energy she had and how well she sang.

“I hadn’t heard or seen that in years. Mary Martin, a mutual friend of k.d.’s and myself set it up, and k.d. called me and we had a little talk, and we decided to try a few sides.”

What was originally intended to be a six-song EP, quickly blossomed into a full album. Bradley said he was impressed by her voice.

“Well, it was her power. She’s just different,” he said. “She has a tremendous amount of energy and control, and she’s right on in pitch. She has good taste in what she does, and she can sing any kind of a song she wants to sing. And she’s young – she’s got a lot of years to go.”

Bradley knows a thing or two about vocalists – for 30 years he was head of the A&R department at Decca Records.

Born in Westmoreland, Tennessee in 1915, Owen Bradley was a pop music piano and vibe player before he accepted a position as musical director at WSM Radio.

Bradley had his own orchestra, and one of his most famous bands – The Owen Bradley Quintet  featuring The Anita Kerr Quartet on vocals – scored a top 20 hit in 1957 with “White Silver Sands.”

Known as an arranger and a songwriter, he simultaneously held the position with Decca Records and had a direct hand in the careers of Webb Pierce, Ernest Tubb, and helped secure the transition of Conway Twitty when he made the leap from rock to country music.

His best-known signing was Loretta Lynn, and he was also responsible for signing Bill Anderson.

He’s most famous for his work with Patsy Cline – recording her at his own Quonset Hut Studios (co-owned with his brother Harold, a well-known session musician – and later sold) and produced all her major hits.

“Well, Patsy – a lot of people seem to think she was a tough customer,” recalls Bradley. “I didn’t find Patsy to be that way. She was just like all the others – we didn’t always agree on everything, but I wouldn’t have liked it if we didn’t have our disagreements – I think that’s the way you learn.

Before Cline succumbed in a plane crash in 1963, she suffered serious injuries in an auto accident in 1961. Bradley recalls a time she visited the studio after she was released from hospital.

“Patsy stuck her head in the office right after ‘I Fall To Pieces’ became a hit,” recalls Bradley, “She had just gotten out of the hospital, and this record had been going for about eight or nine months – that’s how long it took to be a hit.

“She stuck her head in the office and said, ‘I don’t want another recording. I just want to enjoy this one forever.’

“Patsy was a great singer. To be honest, I doubt if any of us really appreciated her as much as we should have, but that was then and this is now.”

Bradley said that he and k.d. lang mutually picked the material for Shadowland,  but it’s the first time he’s recorded the title track with a vocal.

” ‘Shadowland’ is a song that I’ve had for about 25 years. I had a band – a big dance band. We didn’t have a vocal because the vocal was so difficult. And I happened to have a sheet copy of it laying around, and we were going for a lot of old songs, and I said `Hey, there’s a great song, but it’s unsingable,’ and she said, `Would you play it, and let me hear it’.

“So I played it and she liked it and started fooling with it. I thought she’d throw it away in a day or two, but she didn’t. About the second or third day she phoned and told me that’s what she wanted to call the album. She fell in love with the song.”

Despite his years of inactivity, Bradley insists that Shadowland  isn’t a comeback for him.

“Actually, I’ve never been away,” he says. “I come in here everyday and do something. I haven’t had the responsibility of turning out a project of this magnitude. I did a few records three years ago with Burl Ives, who’s an old friend – but on and off we’ve been doing records for 35 years, so there’s no big pressure there.

“There was no real pressure with this particular record, but I felt the responsibility of pleasing k.d., pleasing the people at Warner Brothers and Sire, and pleasing myself.”

The Bradley legacy lives on. His son Jerry – a former RCA Records executive, runs Opryland’s 16th Avenue. His daughter Connie is an executive at ASCAP (The American Society Of Composers And Publishers), his nephew Bobby engineered lang’s album. Brother Harold played bass and banjo on the sessions.

“As long as they keeping making enough money to allow me to make records, I’m happy.”