Nick Krewen
Special to the Star,
Published on Wed Jul 20 2011

A year ago, the prospect of a Tea Party reunion seemed laughable.

When the hugely popular Canadian heavy rock band — seller of a million albums in this country in the 1990s — acrimoniously split apart in 2005, the rift between singer, songwriter and guitarist Jeff Martin, bassist Stuart Chatwood and drummer Jeff Burrows seemed so cavernous that Martin, then 35, bolted the country, settling for a few years in Ireland before permanently relocating to Australia and starting up his new band 777.

Chatwood and Burrows also reinvented themselves, as Prince of Persia video game score composer and drummer for Toronto rockers Crash Karma respectively, so the trio’s combined individual successes offered little incentive for a return to the glory days when “The River,” “Save Me,” “Heaven Coming Down” and other gems of mid-Eastern modal rock dominated album-oriented radio airwaves. 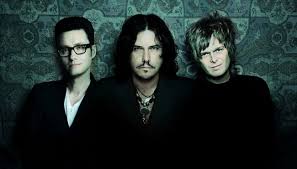 But thanks to the gentle persistence of two parties — S.L. Feldman agent Jeff Craib and band manager — the Tea Party trinity has hashed out their differences. They return to Toronto for a show at the Sound Academy tonight.

“Jeff and Andy had been putting off offers for The Tea Party to get back together the last two or three years,” said Martin recently from a Muskoka cottage. “Apparently every Canadian promoter under the sun wanted to see us back together, but there was never a time or place.

“I received a call in January from Jeff Craib, and then I spoke to Andy just to see if this was realistic. He told me Jeff and Stuart were willing to talk.”

Martin booked a March Canadian 777 tour, and met both members privately en route; Chatwood in Vancouver, and Burrows back in Martin’s hometown of Windsor. He left both meetings encouraged.

“I think the reason that they went so well was because I took the initiative and said, ‘Listen boys, as far the past is concerned, I’m over it. Hopefully the two of you are as well. There is an incredible enthusiasm and interest in getting this band together.

“‘Let’s see if we can get into a rehearsal room and make that magic. At the end of it, can we smile at each other?’”

On June 29, the trio nervously began four days of rehearsals near Ossington and Dupont.

“The three of us hadn’t been in a room together in any way, shape or form for six years,” Martin explains. “So there was a lot of apprehension and a little bit of anxiety.”

While they were away, each man had changed and a U.S. political movement had borrowed the band’s name, but — jamming to “The River” — they felt relief. Their brand of bluesy, Zeppelin-and-Doors-flavoured mysticism still worked.

“It was like getting into a very exotic Ferrari that hasn’t been driven for quite some time, but everything works,” Martin recalls.

“The three of us were smiling at each other. That was the greatest start ever.”

As far as “being over it,” drummer Jeff Burrows says further discussions need to be held.

“Personally, I feel there are a lot of things that need to be discussed. I have no ill will or anything towards anyone, but I just feel that if we’re going to be friends or business partners moreover . . . I think, as adults, we can speak about things without getting anyone’s nose out of joint.

“And I think if everyone wants to continue, that’s my trigger. We need to talk about this stuff, or forget it.”

Burrows, who also hosts middays on Windsor/Chatham radio stations The Rock, says that communication between the trio “had diminished to zero per cent by the end,” and wants that to change, but he is hopeful that the band can continue after its 11-show run.

“I’ve been open to getting back together the whole time, but time heals everyone’s wounds, or so they say. I was always keen, so this is a great opportunity.”

A warm-up Peterborough show was followed by a sold-out Montreal Metropolis date that Martin called “excellent . . . It was like the band hadn’t been away for six years. I don’t remember the Tea Party ever being that tight.”

Martin blames the initial breakup on several factors, from “a very big personal schism” to “losing our way” with 2004’s Seven Circles.

“In my mind, Tea Party was always meant to be the black sheep of any rock outfit,” Martin explains. “We do things the wrong way. We don’t succumb to what is considered the norm, and we were under a lot of pressure on the last record as far as obstruction goes.

“I have to take a lot of the blame for that situation: Mentally I was not as in control as I had been in the past. I got a vote of non-confidence, which, hindsight being 20/20, I can’t blame them for.”

Now they’re back, Martin is cautiously optimistic of a brand new album in Tea Party’s future.

“There is a chance,” he admits, adding that he’s planning an early 2012 sabbatical in Belize, Egypt and Morocco for creative inspiration.

“It can’t be subpar,” Martin notes. “I need to make sure that I come back with enough material for Jeff and Stuart that they say, ‘Yep — here we go!’ ”