For The  KW Record

The clock is ticking for The Tea Party.

Jeff Martin warns that the fat lady could be singing for his Windsor-born trio sooner than later.

“Every record we do is getting closer to our vision,” said Martin last week, in Toronto to master his band’s latest opus Triptych, due in stores June 15.

“But once we get there it’ll be time to stop.”

Martin predicts a five-year timeline with another album or two thrown into the mix before he, bassist/multi-instrumentalist Stuart Chatwood and drummer/percussionist Jeff Burrows call it a day. 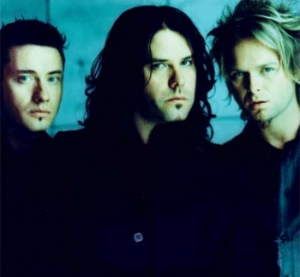 “The Tea Party still has a lot to do as a collective unit. I think maybe another record will be the defining moment for the band, and that’ll be that.”

Martin, the band’s vocalist, guitarist and songwriter, says he doesn’t want The Tea Party to exist beyond its significance.

“I’ve considered the music this band makes art, and I want it to be perceived as such,” he explains. “I want to leave a lasting imprint. I never want to fade.

“My heroes like Rimbaud, at the age of 19, just walked away from poetry. He’s left this lasting impression that’s never faded. A lot of my heroes in rock music, we witness them fading before our eyes. You see the ego not willing to let go, because their best work is behind them.

“I know it’s a case of that burning desire to always perform, but I look at it in a different way.”

“Hopefully I’m not going to be eating crow. I think I’m going to stick to my guns.”

And once he leaves the stage, don’t expect him to form another band or go solo. He’ll be behind the scenes in a profession that prompted a recent move to Los Angeles.

“I think my medium will be producing,” says Martin. “I couldn’t imagine performing with any other people than Jeff or Stuart. The idiosyncracy in this band goes very deep, and it ‘d be too strange. I tried a solo show once in Australia, and I never felt more naked. So producing would be the medium I’d go into eventually. Then I’ll be busy pursuing the art of happiness.”

It’s ironic that Martin is envisioning a light at the end of the Tea Party now, considering that Triptych  is in many ways poised to take the band further than such earlier classics as Edges Of Twilight  or Transmission. The dozen songs on Triptych  are more direct, accessible and spacious than ever, complimenting the trio’s exotic blend of rock with optimistically romantic overtones.

“It’s breathing more,” Martin agrees. “The focus isn’t solely aggression, where Transmission  was coming from. There are also elements of melody that haven’t been as apparent in our other work. I think that’s allowing the song to breathe as well, instead of trying to cram in every blip and beep I could.”

Martin credits his Australian wife Nicole with helping him out of the darkness that encompassed most of Transmission.

“She’s my soulmate. She was really the one that helped me get through that muck of cynicism and vice and everything I went through on Transmission. The more romantic moments on Triptych  are definitely attributed to her.

“There are a lot of romantic moments on this record. It’s one derived from true heartfelt, personal experiences. I’m not waxing philosophical this time out. I wanted to chill a bit.”

Instead, Martin says the thematic approach to Triptych, which the band previews tomorrow night at a Pepsi-sponsored, radio contest-driven, invitation-only show at the Tourret, is instead driven by truth.

“You know the story of Siddhartha?  This record has a theme like Siddhartha’s character, and what she went through — the trials and tribulations of finding truth. That would be the thing that ties in a lot of the songs on this record.

“There’s a lot of searching going on in this record continually, which seems to be the story of my life. You stop searching, you’re dead. You cease to exist. No one finds what they’re looking for, ever. That’s the beauty of this existence we go through.”

And for those of you who can’t get into tomorrow’s show, don’t fret. Jeff Martin promises the Tea Party will be back this way in November.

“We’re going to pull out all the stops in our November tour,” says Martin.

“It’ll be an evening with The Tea Party: a good three-hour concert where we pull out all the stops, all the instruments, and leave people exhausted at the end.”

“After that, I’ll drop dead from my vices,” he laughs.