Suzie Katayama…Cellist and Arranger to the Stars

As with most five-year-olds enamored with Saturday morning television, Suzie Katayama was dazzled by the animated images dancing in front of her eyes, fuelling her imagination and making her laugh. 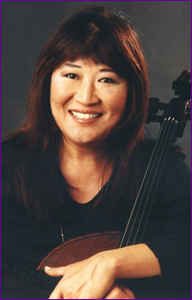 But unlike most youngsters, she was equally taken with the variety of sonics bombarding her ears, ranging from the wild sound effects punctuating the action to the music score that enhanced the cartoon’s emotional impact. She soaked up the work of score composers Henry Mancini, Nelson Riddle, Elmer Bernstein and Jerry Goldsmith.

“It fascinated me how all the colors came together,” recalls Katayama.

A few hundred albums later, she remains fascinated. The Los Angeles-based Katayama has created a respectable niche for herself as an in-demand session cellist and touring performer, stretching her expertise between musical, television and movie projects. It’s a list that covers over two decades of influential contemporary music classics, ranging from Prince’s multi-million selling Purple Rain and Madonna’s stunning Like A Prayer to Alanis Morissette’s breakthrough You Oughta Know and Let Go, Avril Lavigne’s springboard to stardom.

Plying her trade with an 18th century Testore cello and a Salchow bow, Katayama answers the call from recording artists, arrangers, orchestrators and producers to enliven sessions with strings. She often serves as a solo entertainer, as part of a small ensemble or sitting in an orchestra chair. And if cello isn’t on the menu, Katayama can capably deliver accordion and piano parts.

“Sometimes I add a little glue to it,” she admits.

When she isn’t playing, Katayama can be contracted to arrange, conduct and copy music.

But she doesn’t feel she’s anything special.

“There’s a lot of talent out there, but there’s a lot to be said for being in the right place at the right time,” states the woman who has toured with legendary British guitarist Eric Clapton and innovative Iceland performer Björk in the past three years.

“You’re only as good as the boat that floats you. All the people I work with are brilliant and I consider myself extremely fortunate.”

Katayama, who lives with a menagerie of six parrots in the city where she was born, feels much more at ease throwing out the names of several inspiring colleagues within her community circle, including veterans Jeremy Lubbock, David Campbell and Paul Buckmaster.

“I love the camaraderie between us,” Katayama admits. “It’s very much a team effort.”

But the key to Katayama’s demand is her adaptability. There isn’t much she can’t do. Over the past few years alone, she’s bounced from the alternative electronica of Supreme Beings Of Leasure to the aggressive velocity of Alien Ant Farm, with detours into the soulful R&B of Brian McKnight and the jazzy stylings of pianist David Benoit.

When she enters the studio, she has to be ready for anything.

“We usually never get music ahead of time,” she says. “Usually we just show up, and if it’s an arrangement, you’ll be sight reading. Sometimes an artist will say, ‘We need you to come in and put something on.’ You start playing and ask them what direction they want you to go in. If they know, then you try different directions, because you can change the song. If the song is very similar through the bridge and through the chorus, you want to do something a little hooky.”

Katayama says it’s a fine balance between skill and overkill.

“If you do too much, you can change the whole temperament of the song. If it’s a hard rock thing and you put on strings that sound a little too sweet or too smooth, it takes away the edge.”

Katayama began her musical education with the accordion, switching to cello because she was intrigued “by its singing voice timbre” and because her friends discouraged her from trying the viola.

After taking formal lessons with a number of teachers including Greg Bemko, Katayama broke into recording when string player Novi Novog called her in to perform on Prince’s Purple Rain.

“Prince made me listen to rock ‘n roll again, made me excited again because music was going in different directions.

News of her participation triggered a flood of responses.

“I received a phone call from Mike Post, who told me, ‘You don’t know how big this album is going to be,’” recalls Katayama, also an avid photographer. “He was one of the first people to give me the experience of playing for television shows like Hill Street Blues, L.A. Law, Hunter and The ‘A’ Team.”

Katayama also works on soundtracks, and remembers being pleasantly surprised two years ago during the recording session involving a veteran country musician.

“We recorded the soundtrack to the film All The Pretty Horses and Marty Stuart just wowed the entire orchestra with his music and live performance — just floored everyone,” says Katayama. “It was a great honour.”

“When you record something magic, when everything ends up a little better than you expected, and the group plays so well together – that’s the fun part.”