For The KW Record

It’s an ode with an oud.

The Tea Party has accumulated an interesting collection of exotic instruments over the years, but singer, songwriter and guitarist Jeff Martin admits that their latest addition came out of the blue. 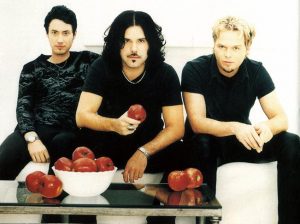 A four-stringed instrument called the oud makes its debut on “Samsara,” a cut from the Windsor trio’s latest album Triptych. According to Martin, it came courtesy of a traveling musician with the Robert Plant and Jimmy Page Expect No Quarter tour back in 1996.

“I met Hossam Ramzy, who records with Peter Gabriel‘s Real World label,” recalled Martin during a recent interview. “We played a show with him when we opened for Page and Plant when they brought the Egyptian orchestra with them, and Hossam took to our music for songs like `Bazaar’ and `Sister Magdalene.’

“We had a conversation afterward where I told him I’d love to have an oud. Everyone that I had seen hanging around Montreal restaurants were usually up on the wall like ornaments.

“Seven months later a box shows up on my doorstep and it’s an oud from Damascus.”

It’s been added to the approximately 40 exotic instruments that colors and defines the Tea Party sound as performed by Martin, drummer Jeff Burrows and multi-instrumentalist Stuart Chatwood: one that in another era might be described as progressive rock for its long improvisational passages and scattered injections of electronica.

However, the new album Triptych  is much different than the trio’s prior album Transmission. For one thing, it’s already yielded The Tea Party its first #1 single, “Heaven Coming Down.”

For another, it’s a lot lighter.

“Transmission was a very dark, rock record,” Martin explains. “Like Nine Inch Nails or Nick Cave, you can only put it on at certain moments. It’s not something you put on to enjoy.

“Triptych is one designed for you to enjoy. I’d like it to last a long time with people. I’d like to think that music that we’re making has certain aspects of timelessness in it, as far as rock music goes anyway. Hopefully it will leave an emotional stamp on people and they will take it everywhere with them.”

Martin says the big difference between Transmission and Triptych is documenting personal experiences.

“I didn’t want to be so obvious with the literal references this time around,” he admits. “With Transmission, I’d say this song was inspired by Yevgeny Zamyatin, and this one by Jean Cocteau. The cathartic experience that I went through on Transmission was a very dark place. I came out the other side gladly.”

The dozen songs on Triptych — with the exception of a stirring version of Dan Lanois‘ “The Messenger” — were written while Martin was examining a “redirection” of his life.

He hopes to translate the comfort level he achieved during the album’s recording to Triptych.

“I want this record to become a real comforting experience for people,” admits Martin.

“My arrogance would go on to say it’s the best sounding Canadian rock record ever.”

Then Jeff Martin, who has built a reputation as an earnest musician and performer, breaks into a gale of laughter.

WHO: THE TEA PARTY with 100 Mile House