DAMNED AS THEY DO

Whatever else fate has in store for London’s The Damned, the quartet’s 1977 Nick Lowe-produced LP for Stiff Records will be remembered in the history books as the inaugural British punk album to hit the streets.

Although their popularity was quickly overshadowed by The Sex Pistols, The Clash, and let’s face it, practically every other punk band that followed, Dave “Vanian” Letts, Raymond Ian “Captain Sensible” Burns, Chris “Rat Scabies” Millar and Brian “James” Robertson can claim pioneer status on a few other significant fronts. 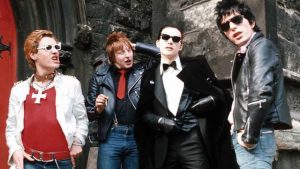 They were the first U.K. punk band to tour North America. They were the first to chart in Britain, as Damned Damned Damned  peaked at Number 36. And their somewhat muddled yet electrifying three-chord epistles of raw energy still inspire a contemporary generation of stylistic radicals decades later, ranging from rapid-fire Offspring to M.I.A. reprobates Guns ‘N Roses.

“We started out before the word ‘punk’ was even coined,” declared Damned frontman Dave Vanian Sunday over a cell phone en route to Cincinnati. A considerably revamped Damned perform at Lee’s Palace Wednesday ($20).

“To us, what the term ‘punk’ actually meant was change, and punk since then has gone through several incarnations.”

So has The Damned, whose legend has been sustained through a seemingly endless series of break-ups, make-ups and roster changes.

Today, only Vanian and guitarist Sensible remain from the original 1976 line-up. Vanian’s wife, Patricia Morrison, who previously toiled for Gun Club and Sisters of Mercy, is in on bass. Captain Sensible keyboard sidekick Monty The Moron, and ex-Janus Stark drummer Andrew “Pinch” Pinching, who joined the band a few days prior to the September 30 North American tour kickoff in Ventura, California, round out the group.

Even The Damned sound has undergone a significant overhaul, the furious anti-melodic shackles of the first album and the disappointing Music For Pleasure  forsaken for the energetic power pop of 1979’s Machine Gun Etiquette and later, the intriguing Goth musings of 1985’s Phantasmagoria.

“I’d like to think we were experimental over the years,” says Vanian, 41, his British accent thick with understatement.

Vanian says the band prefers not to be viewed through the rose-colored glasses of nostalgia, although he promises to perform such classic treasures as “Smash It Up” and “Curtain Call.”

“I think people who watch us are surprised that they don’t see five overweight individuals going through the paces of a tired old set,” he states. “It’s not like that at all. We’re still excited to be on stage. We also have a whole pile of material that’s ready to be put down in some form. We’re just looking for an American label.”

Yet he does wax nostalgic about jumping from The Masters of the Backside, featuring future Pretender Chrissie Hynde on guitar, to The Damned.

“Rat and Brian were already together, and I heard they were auditioning for a vocalist,” Vanian recalls. “They were also going to audition a singer who could play bass. I got there a half-hour early to check out the competition, but he never turned up. I found out later it was Sid Vicious.”

Vanian recalls the Damned’s first U.S. tour being met by a combination of enthusiasm and indifference.

“One club we played found everyone sitting in front of us and eating pizza,” Vanian recalls. “We were so outraged that we pulled up a table on stage, got a tablecloth, ordered a pizza and ate it while they were watching. Then they  got outraged, because the tables were turned.”

Although the days of subversive pizza incidents are behind them, Dave Vanian says he’s not sure the role The Damned will play in the new millennium.

“As long as there are new songs to play we’ll be happy,” he laughs. “I don’t know much more than I did in ’77 in some respects, except I know a few more chords.”