Are Seattle’s Supersuckers the spawns of Satan?

It’s an association the rogue quartet’s singer and bassist Eddy Spaghetti – Edward Carlyle Daly III to his mortal parents – will neither deny nor disavow. But judging the number of times ol’ Beezlebub is referenced lyrically in such halo-bending anthems as “Born With A Tail,” and “Hell City, Hell” — and visually on the covers of 1992’s high octane The Smoke Of Hell , the horn-rimmed fury of 1994’s La Mano Cornuda  and 1995’s hell-raising Sacrilicious — it wouldn’t be a stretch to suggest Supersuckers hanker a major mojo for the Man Downstairs. 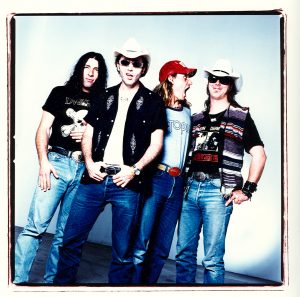 “We place him in the same category as the Easter Bunny and Santa Claus,” Spaghetti explained recently from the band’s van somewhere in the outskirts of Los Angeles.

“Why not Satan? He has great art. He has the best parties. If he held a volleyball tournament and got to choose his teammates, I’d hope he’d pick me.”

Spaghetti is clearly courting controversy with Supersuckers’ cheeky satanic obsession, and knows the marketing value of a good dispute.

“That kind of juice sells a lot of records,” he notes.

And Supersuckers, who promise to tear up Lee’s Palace November 2 ($14), with a truckload of new tunes from their recently released The Evil Powers Of Rock ‘N Roll  and the regular gems from their August issued Sub Pop compilation The Greatest Rock ‘N Roll Band In The World, would love to sell a lot more records.

However the band’s fast track to world domination hit a speedbump in 1996 with its detour into an album of acoustic outlaw country music called Must’ve Been High.

“A lot of the songs we write start on acoustic guitars, start out as little country songs and eventually turn into rock songs. But some of them remain acoustic, and we had this little stockpile. We were looking to jump to Interscope at the time, and we never thought they’d let us do anything this crazy. Sub Pop was cool enough to let us do it.”

The planned Interscope album that was supposed to be out in the interim was recorded…and shelved.

“We were a piece of meat that Interscope started chewin’ on and found was too tough, so they had to spit us out,” says Spaghetti.

“I’m glad in retrospect that that record didn’t come out, because it was kind of safe, and it would have tarnished our bad-ass reputation. But we didn’t plan on there being such a gap between the country record and the rock record, so there’s been some confusion.”

That confusion has been cleared by The Evil Powers of Rock ‘N’ Roll , a hard-driving album with such politically incorrect songs as “I Want The Drugs,” “Dead Meat” and “Fisticuffs.” 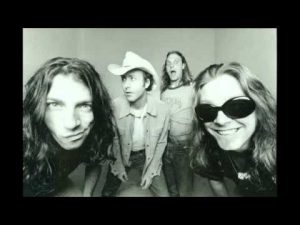 Supersuckers began their ornery drive down the hedonistic highway a dozen years ago, launching their present lineup in Tucson, Arizona before heading off to Seattle as a subversive antidote to the flannel-flushed grunge movement.

But Spaghetti was corrupted long before that…by his mother.

“I learned the ways of evil through my mother,” he says. “She had us wearing 666 t-shirts for when the Jehovah’s Witnesses came over. I didn’t know what 666 meant. I was in fourth grade. So I’d put it on, answer the door, and the Jehovah’s would just freak out.

“So I’ve always leaned toward the rebellious. I think the coolest stuff is the stuff that tells you what you’re not supposed to say or do. I’ve always been a fan of that, thrown in with a dash of comedy. It keeps it interesting.”

As for these so-called evil powers, Spaghetti has compiled a list.