TORONTO — Ten days away from starting their next world tour in New York City, and Soul Asylum still haven’t found a drummer to fill the seat left vacant by their last one.

Yet Dave Pirner and Dan Murphy spent last Wednesday in a Toronto hotel room seemingly unconcerned about their dilemma. Murphy, the band’s baseball-jersey wearing guitarist, spends his time milling around a table of muffins, fruit and juices selecting his next choice, while singer, songwriter and guitarist Pirner, dressed in a grey shirt, lime slacks and rainbow socks, ambles slowly to the bathroom, his gait as relaxed as the low drawl of his voice.

Soul Asylum’s last drummer Sterling Campbell stuck around to record the Minneapolis rock band’s 11th album Candy From A Stranger — in stores today — but gave notice that he wouldn’t be around for the tour. 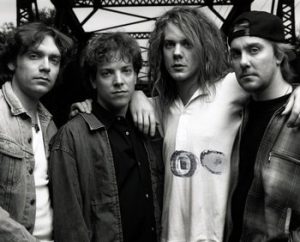 “Whenever we toured, he never really seemed to enjoy himself,” notes Murphy, who is entering his 18th year of musical partnership with Pirner and bassist Karl Mueller.

“He wasn’t passionate about touring, although he assured us he’d give recording this album his whole heart.”

The fact that there is still no replacement at this late stage of the game as less to do with Soul Asylum’s desire than fulfilling promotional duties mandated by Sony Music, their record company.

“We have to convince our record company that we actually have to rehearse,” Murphy says sarcastically. “It’s just lost on them.”

Murphy says the decision between two possible replacements — Ian Mossington and Charlie Quintana — was to have been made when the band reconvened in Minneapolis last Thursday.

But he made it clear that if Campbell experienced a sudden change of heart, the door would still be locked.

“I think once you quit, you quit,” says Murphy.

Still, Campbell did an admirable job stickhandling for Soul Asylum during Candy From A Stranger, an album far removed from the days when the band previously known as Loud Fast Rules broke out of the burgeoning thrash rock scene under the production guidance of Husker Du leader Bob Mould.

“I kind of miss those days, but I think there’s been a logical progression with our band,” Murphy allows. “There’s this real aggressive vibe male rock thing where everything’s on top, but we never thought we were all that great at it. There were always bands that were tighter than us, played faster, and their drummer played harder. They were kind of hollow victories.”

“It’s pretty shocking,” Pirner laughs. “It’s not something we ever really thought about. We’d play a gig at a local club and figure that if it ever stopped being fun we were going to quit.

As the years progressed, Soul Asylum evolved from the speed thrash of earlier albums Made To Be Broken  and Clam Dip And Other Delights  to the more melodically accessible Grave Dancer’s Union. The 1992 album broke Soul Asylum into the mainstream, selling hundreds of thousands of albums in Canada, over four million in the U.S., driven by its Top Ten hit “Runaway Train.”

The band seems to be moving even closer to pure pop with Candy From A Stranger, although Pirner feels the latest album is more textured as the result of a trip last year down to New Orleans.

“New Orleans has the best musicians in the world,” claims Pirner. “It was humbling, and it made me realize that nobody is playing a big Marshall amp down here, or a loud guitar, and that’s what I do. It sort of put things in perspective.

“We learned how to listen down there. At 5 o’clock we’d go into a bar where there would be four people, and our jaws would be dropping. So now we listen to what else is happening in the band.”

Pirner, who writes all the songs on Candy From A Stranger  save for the Murphy-penned “Blood Into Wine”, says the new album isn’t so much about ending relationships as starting them.

“Then I try to make a rhyme about it,” he laughs.

Some may remember the days when Pirner made tabloid headlines by dating Hollywood actress Winona Ryder. They broke up a few years later and Pirner says Tinseltown is one scene he can do without.

“I don’t miss it,” says Pirner of Hollywood. “I have the utmost respect for actors, but I didn’t fit in. Hollywood’s a weird place. Everything is fake.”

However both Pirner and Murphy, who hope to return with Soul Asylum at the end of the summer for a cross Canada tour, have an elephant’s memory when it comes to recalling their national tour with Hamilton’s Junkhouse.

“Did we play with them?” inquires Dan Murphy.

“The big guy?” Pirner asks, trying to twig his memory about Tom Wilson.

“I don’t have too many stories about him. I just remembered he was hilarious. He made me laugh a lot when we were in Vancouver.”