Here’s another woman in search of a makeover, but in Skylar Grey’s case, it seems to be working.

Grey’s pedigree is an interesting one: she was originally signed by Linkin Park guitarist Brad Delson to their label, performed on LP rapper Mike Shinoda’s Fort Minor side project and has since been musically involved with Duncan Sheik, Lupe Fiasco, Dr. Dre, Moby and Eminem, who teams up with her on Don’t Look Down to spit out a rhyme on the playfully sexy “C’Mon Let Me Ride.” 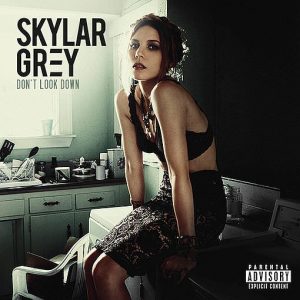 To clarify, Don’t Look Down is a pop album that showcases Grey’s many strengths as singer, songwriter and arranger. While she manifests those gifts in undeniably catchy earworm like “Weirdo,” — sort of a twisted anthem in the style of Alanis Morissette’s “You Oughta Know” that packs a monster riff and mighty bluster as it celebrates outcasts everywhere — and the haunting “Back From The Dead,” a fresh reassessment of a buried relationship that has been unexpected resuscitated, underscored by the genius inject of a Theramin into the chorus, what makes Grey so refreshing is the imaginative way she tackles topics raging from jealousy to survival.

She’s not exactly rewriting the pop manual, but Skylar Grey shows the portent to develop into an artist as substantial as PInk if she gathers a following.

And Don’t Look Down gives her a fighting chance.

DOWNLOAD: “C’Mon Let Me Ride,” although Eminem’s input into this track is a minor contribution, it’s the nudge-and-a-wink frivolity of Grey’s singing and a killer refrain that makes this a great introduction to Skylar’s world.

Be the first to comment on "Skylar Grey reinvented on Don’t Look Down: Review"