One Direction defies the stereotype in a two-hour, 22-song set at the ACC.

It is with a great sense of relief that I don’t have to deliver this concert review from the Air Canada Centre to you aurally, dear readers.

Because if I did, you’d never hear a word over the hysterical screams of blood lust from 13,000 easily excited fans of the latest boy band sensation, One Direction:  shrieks that easily raised the ACC roof a few dozen metres due to incessant cheering, yelling and singing.

Hard to believe it’s been a scant 17 months since One Direction made its concert debut opening for, and upstaging, Big Time Rush.

They’ve returned to headline two shows since at the Molson Amphitheatre, and now, after tickets were sold out more than a year in advance, Niall, Zayn, Liam, Harry and Louis return for two more nights at the Air Canada Centre, commercial juggernaut in tow. 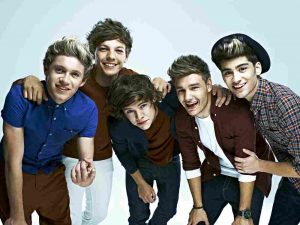 And how gigantic is that juggernaut? For a good 10 minutes before a One Directioner even set foot onstage, the Kool-Aid was delivered on two big screens in the form of spots for new merchandise and embraced with open mouths.

There were spots for 1D dolls (insert scream here), a 1D fragrance (insert scream here), a promotion with a business supply franchise for anti-bullying scrapbook covers (insert a few screams here) and last but not least a promotion, notably following in Justin Bieber’s footsteps, for a 3D film that should appear in theatres sometime before Christmas (yes, insert even more screams).

Can you say ka-ching?

The fact that these five British lads (OK, four Brits and one from Ireland) are collectively worth nine figures after only two albums and music sales of 30 million speaks volumes to the genius of Simon Cowell, the master American Idol and X Factor puppeteer who assembled and workshopped them. He seems to have a sixth sense when it comes to manipulating public musical desire.

That’s not a knock against One Direction, who defied the stereotype and gamely proved their mettle as something other than your typical Tiger Beat pin-up poster boys at numerous points of a two-hour, 22-song set that began with the energetic one-two punch of “Up All Night” and “I Would.”

For one thing, they can all sing, whether it’s solo or trading leads.

The songs are typically what you’d expect — harmless bits of romantic drivel that are chaste and innocent — but what really wins them over with the predominantly female crowd, aside from their cuteness, are their individual and collective personalities.

Unlike every other musical apple of a young girl’s eye, One Direction also avoids slick choreography as if it were the plague. They basically ham it up on stage or just stick to singing and leave the pretty boy stuff to … well, other pretty boys.

Yes, there were the typical “Toronto is the greatest audience ever” platitudes, but they weren’t nearly as contrived as one tends to feel at these gatherings but rather came across as grateful. And next to their unforced charm, One Direction’s greatest weapon is … their floating stage, which carried the boys high above the crowd and delivered them the entire length of the ACC, surprising those in the back quarter who only dreamed they’d see their fave One Directioner from afar instead of up close and personal.

Much waving from the boys and much swooning from the girls continued to perpetuate the romance between star and fans, as the music veered from tender balladry (“Over Again,” “Little Things”) to the upbeat (“Rock Me”) and unexpected covers (Blondie’s “One Way Or Another” and Wheatus’ “Teenage Dirtbag.”)

There was the big flame-throwing, streamer-shooting, confetti-dropping finish of “Kiss You,” and if your eardrums were still mildly functioning, the big encore of “Live While You’re Young” and “What Makes You Beautiful” shut them down for good.

As far these infatuations go, the daydreaming will continue as the One Direction phenomenon seems to be nowhere close to burnout.

Their next album will probably be as popular as the first two, Up All Night and Take Me Home, and young girls will continue to imagine snuggling up to Harry or Zayn and fantasize about a life together, stolen kisses and white picket fences.

So, for the moment, the One Direction will continue in the only direction they’re currently aimed: up.

And I’ll be communicating in semaphore and sign language until my hearing returns.

Be the first to comment on "One Direction proves they’re more than Tiger Beat power boys: Concert review"