After a decade of making music together, Tears For Fears‘ mainman Roland Orzabal decided to shed a Tear of his own — namely partner Curt Smith.

As a duo that came to prominence during the latter, electronic stages of new wave music, Tears For Fears classics like “Pale Shelter,” “Shout” and “Everybody Wants To Rule The World” had instant impact, selling over 15 million copies of their three albums.

“Curt sang four songs on the first album, three on the second and only one on the third,” said Orzabal, the anger rising in his voice as he stretched on the couch in his hotel suite.

“Oleta (Adams) came in on The Seeds Of Love and filled the hole.” 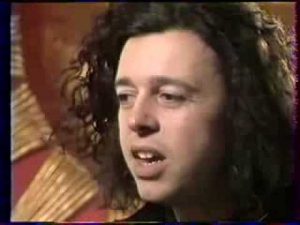 Orzabal said Smith, with whom he originally formed the group with in Bath, England, had also threatened to quit numerous times during live tours dating back to ’85, and “had to be persuaded to tour for The Seeds Of Love.”

It was a financial problem that finally split the duo apart for good.

“I guess the log that broke the camel’s back was that our manager took all the profits from our European and American tour, deposited them in his own account, and declared bankruptcy,” said Orzabal.

“Our lawyer said, ‘What he’s done is wrong,’ and said the future of Tears For Fears depended on what we did next.

“Curt was very close friends with the manager and forgave him. And he also hired another lawyer because he didn’t like what ours was saying.

“Whenever you get two lawyers involved, it becomes one hell of a financial mess.”

Orzabal said the only solution was for them to regroup and each assume part of the debt.

“It turned out not to be as bad as we thought. We both have solo deals, and I retain the rights to the name Tears For Fears. But that’s rock ‘n’ roll.”

Orzabal maintains that Smith’s creative participation was minimal, and that the relationship had a George Michael/Andrew Ridgeley tone to it.

“We have co-writing credits on two songs,” said Orzabal.

Orzabal says he’s half-finished the next album — which may be under his own name or that of Tears For Fears — and it should be completed by August and released in early ’93.

“His name is Alan Griffiths, who played guitar for us on the ’85 tour,” said Orzabal. “He just suggested out of the blue that we try writing together. It happened during a period when I wasn’t obsessed with a tour, and decided that I wouldn’t worry about what was coming up next.

“I had felt for previous albums that I had been an agent of fate, so I decided to just try and be normal and have fate do something for me.”

Orzabal said TFF fans may be in for a shock.

“The material is all very different,” said Orzabal. “It’s a lot more whacky, and there’s a nervousness that will work better live.

“When I was recording Seeds Of Love,  there were no confines. I didn’t care how much time I spent in the studio or what I did. For this album, I’m very aware of it. The songs don’t ramble, andit’s not as extravagant as past productions.”

With regards to his past success, Orzabal says he never put much stock in his accomplishments.

“I have got this safety mechanism which prevents me from enjoying success,” says Orzabal. “I’m sort of frightened of flying too high and being levitated. I enjoy making music. In my mind, failure is linked with freedom, success with hard work.”

Instead, Roland Orzabal is looking to the future.