Richard Fairbrass is too sexy for this interview.

The 31-year-old vocalist of British dance music sensation Right Said Fred is also too sexy for Milan and too sexy for his shirt.

He’s even too sexy for his car.

With its palpitating disco rhythm and campy lyrics, the song skyrocketed to the top of the Billboard Hot 100 last week. It holds the #1 position again this week, and is the top requested video at MuchMusic.

In Canada, music trade weekly The Record lists “I’m Too Sexy” at #2 with a bullet.

In Europe, where “I’m Too Sexy” was released four months earlier, it held the #2 position for seven weeks on the U.K. singles charts. Only Bryan Adams’ 13-week run at #1 with “(Everything I Do) I Do It For You” stopped Right Said Fred in its tracks. 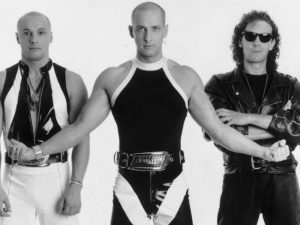 So how does it feel at the top of the pops?

“It feels very odd,” said Fairbrass in an exclusive Spec interview yesterday from London. “I’ve been walking around in a bit of a daze. It’s like having a dog on a leash where you’ve lost control.”

Fairbrass formed Right Said Fred four years ago in Putney, a London suburb, with his brother Fred, 28. They got the name from a 1962 pop hit called “Right Said Fred”, which was about piano movers demolishing a house. The duo became a trio when Rob Manzoli — a former guitarist Canada’s Lydia Taylor Band — joined in 1990.

According to Fairbrass, “I’m Too Sexy” was a hit that almost wasn’t. It was the last song on a demo he played to his brother and guitarist Manzoli.

“I thought it was pretty terrible,” admits Fairbrass, who managed a gym for three years. “I always played the first three songs on the demo and shut off the recorder for the fourth. One time thought I was a bit slow with the stop button, and Rob heard the opening bits. He was immediately intrigued.

“It took Fred another month to come around to it.”

Fairbrass said it was his gym clientele that sparked him to write the chorus that led to the song.

“A lot of male models came into the gym to work out,” said Fairbrass. “They’re such incredible posuers. Whenever one of these stallions walked in with their tight denim shorts and cowboy boots, I’d nudge Fred and we’d have a good laugh at their expense.”

Borrowing money to remix the record, Fairbrass notes that the public reaction to “I’m Too Sexy” was instantaneous.

“When ‘Sexy’ happened in England, it was a shock,” Fairbrass admits. “We’d been making demos for eight years and gotten absolutely nowhere. I was almost expecting people to buy the record and send it back, saying `Sorry, this isn’t for us.'”

Fairbrass estimates 2.5 million people have bought “I’m Too Sexy,” and he has a theory behind its appeal.

“So much dance music is predictable, and safe, that ‘Sexy’ stands out,” he notes. “It’s cheap and it’s cheesy.”

Right Said Fred completed its first album Up!  just two weeks ago. Virgin Music will be rush-releasing it in Canada on February 28. A tour is also planned, with a confirmed date at Toronto’s Phoenix Concert Theatre on March 17. Their next single is “Don’t Talk Just Kiss,” which peaked at #3 on the U.K. charts. 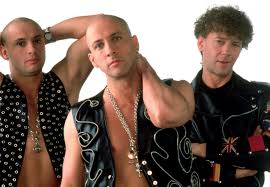 Which brings us to things Richard Fairbrass thinks are sexy.

“Hair, skin, mouths, intelligence, power, money and charisma,” said Fairbrass. “What is sexy is purely subjective, which was the idea behind the song.”

And things that are too sexy?

“Sylvester Stallone,” laughs Fairbrass. “We were going to use his name, but we were afraid of a lawsuit.”