Crowd treated to earful and an eyeful of past and present as Pink Floyd’s wizard of the six-string picked and sculpted his icon songs and applied fancy fretwork into his latest album.

It was a guitarist’s dream.

It’s one thing to hear David Gilmour, Pink Floyd’s wizard of the six-string, perform soaring solos, but another to see him work his magic up close.

The 15,000-plus who attended the Air Canada Centre Thursday night for the first of two Gilmour shows received both an earful and an eyeful, courtesy of the moon-shaped, spotlight-dominated projection screen that has been used for countless Pink Floyd live extravaganzas dating back to the 1970s. 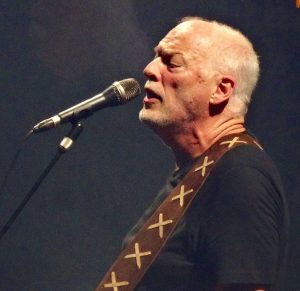 Whenever the grizzled 70-year-old Gilmour took an extended solo on some of the material from his latest album Rattle That Lock, the live TV camera lens honed in on his fancy fretwork, significant string-bending prowess and occasional use of the whammy bar as he picked and sculpted notes at the high end of the instrument’s pitch register.

The solos were beautiful, coherent and fluid diversions into the rock and blues idioms, sporadically played on acoustic or pedal steel, and performed during some of the most iconic songs of the progressive rock canon, extracted from such multi-million albums as Dark Side of the Moon, Wish You Were Here and The Wall, soundtracks for Canadian generations.

And it’s safe to say that Gilmour recognizes who has buttered his bread for the past five decades, stuffing his nearly two-hour-and-45-minute concert with generous note-by-note samplings of such Floyd audience pleasers as “Money,” “Wish You Were Here,” “Shine On You Crazy Diamond (Parts I-IV)” and “Comfortably Numb,” — each one an instant sing-a-long with the ACC crowd who rewarded the maestro and his 10-piece band with standing ovations each time a recognizable tune was played.

For the fairly new and unknown material, such as Rattle That Lock’s instrumental show kick-off “5. A.M.,” the title track, “Faces of Stone” (which Gilmour accidentally started singing a few bars early and had to recue himself), “The Girl in The Yellow Dress” and a few others, well, the crowd politely listened and enjoyed those too, bowled away again by even more tasteful guitar licks. 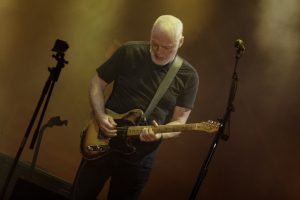 Even though visuals such as animated and filmed sequences were included in the presentation, the spotlight never really wavered from the fact that it was all about the music.

But it wasn’t all about the guitar, as much as that instrument was the show’s centrepiece: Gilmour’s voice and pitch were impeccable, with the doubly impressive notion that he carried it over, in his seventh decade on the planet, without relying on ear monitors to ensure he was on tune.

And with a stellar band that included veteran Pink Floyd and Bryan Ferry session sidemen Jon Carin on keys, Guy Pratt on bass and Roxy Music’s Phil Manzanera on rhythm (it would have been nice if he had been allowed to take a solo or two) served as added insurance for a note-perfect evening.

Even though the set list stretched the hands of time back to 1967 with a cool rendition of “Astronomy Domine,” David Gilmour’s ability doesn’t divulge his age.

But the truth is that Gilmour, like all our rock heroes, is getting older. He’s hinted, in a few interviews, that major tours will become less frequent.

So if, perchance, these two ACC appearances happen to be the last he makes in Toronto, he’s left the concert performance bar raised as high as when Pink Floyd first set it nearly a half-century ago.

That’s a proud and worthy legacy unlikely to be matched anytime soon.