Ever since the sudden 2006 pullout of her contending role on ABC’s Dancing with the Stars due to what would become a messy and very public divorce from musician-turned-aspiring politician Craig Schelske, Evans, 40, has been battling to regain her career form.

The New Franklin, Missouri native’s recent chart-topper “A Little Bit Stronger” shows her to be back on track, although — with the exception of four new tracks on 2007’s Greatest Hits — Stronger is her first new effort since 2005’s Real Fine Place. 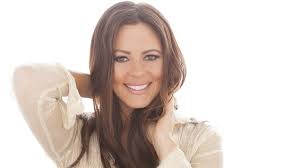 Was she worried about the six-year-gap between albums?

“It caused me to have a little bit of panic,” admits Evans, calling from her Birmingham, Ala. home in advance of her Saturday appearance at this weekend’s CMT Music Festival in Oro, Ontario, just 10 minutes north of Barrie. (Lady Antebellum, Rascal Flatts, Blake Shelton, Ronnie Dunn, Corb Lund and others are also appearing.)

“Then I just had to trust that the timing would be perfect, and it was.”

The public welcomed the doe-eyed singer back with her fifth No. 1 hit, “A Little Bit Stronger,” another in a string of uplifting songs that includes the self-penned “Born To Fly,” and “No Place That Far” and features her expressive and expansive alto.

It’s a gift that started off in a much different direction than the more contemporary style for which Evans, 40, is renown: When she first arrived in Nashville 16 years ago, she caught the ear of legendary songwriter Harlan Howard, responsible for such classic hits as Patsy Cline’s “I Fall To Pieces” and Buck Owens’ “I’ve Got a Tiger by the Tail” — a connection that would lead to her critically acclaimed debut album of traditional country, Three Chords and the Truth.

“I got hired to sing a demo for a couple of songs that Harlan had written, one being ‘I’ve Got a Tiger by the Tail,’ ” Evans recalls.

“He wanted to resurrect that song and try to pitch it to a female artist, so they hired me — I was the new demo singer in town. He was in the studio and he was blown away by my voice and how country I was. He said, ‘you remind me of Loretta Lynn when she first moved to town.’ ”

On the spot, Howard called an A&R exec pal at RCA Nashville and arranged a meeting with the label for Evans.

“I sang for (RCA Nashville president) Joe Galante and he signed me right then and there to a seven-album deal,” Evans remembers. “Thank God for Harlan Howard!”

Her intention was pure: Evans procured traditionalist producer Pete Anderson to produce what eventually became Three Chords and the Truth to “kind of make me into a female Dwight Yoakam.”

“It just didn’t go over that well with country radio, because I think they felt there was no spot for it at the time.” 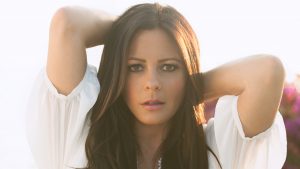 She did an about-face with her sophomore album, securing Music Row overseers Buddy Cannon and Norro Wilson to produce No Place That Far a little more generically, and saved her career in the process, as the title track became her first No. 1 hit.

Evans has since offered her fans taste of her roots, supplementing recent albums with acoustic and bluegrass remakes of her hits “Suds in the Bucket” and, on Stronger, “Born To Fly.”

“That’s just a part of who I am and how I was raised,” Evans explains. “My mother would put on really old Live At The Grand Ole Opry albums and listen to those just over and over and over again.”

Since divorcing Schelske in 2007, Evans has married radio host Jay Barker and relocated her three children with Schelske from Nashville to join Barker and his four children in Birmingham.

“It’s crazy,” says Evans of being a mother to seven children, unfazed by the notion since she grew up in a household with six siblings.

“I love being and mom and wife and I learned how to cook for a big family from an early age — they’re by far the best part of my life, so it’s great. It’s very busy and our house is loud, but it’s so fun.”

Would she ever return to compete on Dancing with the Stars?

“I definitely would,” she replies. “But I don’t know how we would do it now that we live in Birmingham.

“When I was on the show, the kids weren’t in school yet; well, Avery was in the first grade, but I held him out for the beginning of the school year so he could be there with me.

“Now, it would be really, really hard, because I would never leave them and go to L.A. to do it. But it would sure be fun.”

What: The inaugural CMT Music Festival

Where: Burl’s Creek Park, near Barrie

Be the first to comment on "Sara Evans, stronger than ever?"